The battle for the Donbas could well be the deadliest phase of the war.

June 6, 2022, 12:43 PM
By Liz Cookman, a freelance journalist based in Istanbul covering Turkey, Syria, and the wider Middle East.

VUHLEDAR, Ukraine—Oleg Tkachenko gets up at dawn and, as the sky begins to fill with color, packs his van with at least a ton of supplies and heads straight into a battle zone—the front-line city of Vuhledar in eastern Ukraine.

A Protestant priest, Tkachenko makes the journey several times a week, knowing he could be killed. A few weeks ago, a shell landed just 160 feet from his van.

But with the battle for the Donbas region becoming the deadliest phase of Russia’s war on Ukraine so far, the situation for civilians caught in the middle is quickly becoming untenable.

VUHLEDAR, Ukraine—Oleg Tkachenko gets up at dawn and, as the sky begins to fill with color, packs his van with at least a ton of supplies and heads straight into a battle zone—the front-line city of Vuhledar in eastern Ukraine.

A Protestant priest, Tkachenko makes the journey several times a week, knowing he could be killed. A few weeks ago, a shell landed just 160 feet from his van.

But with the battle for the Donbas region becoming the deadliest phase of Russia’s war on Ukraine so far, the situation for civilians caught in the middle is quickly becoming untenable. 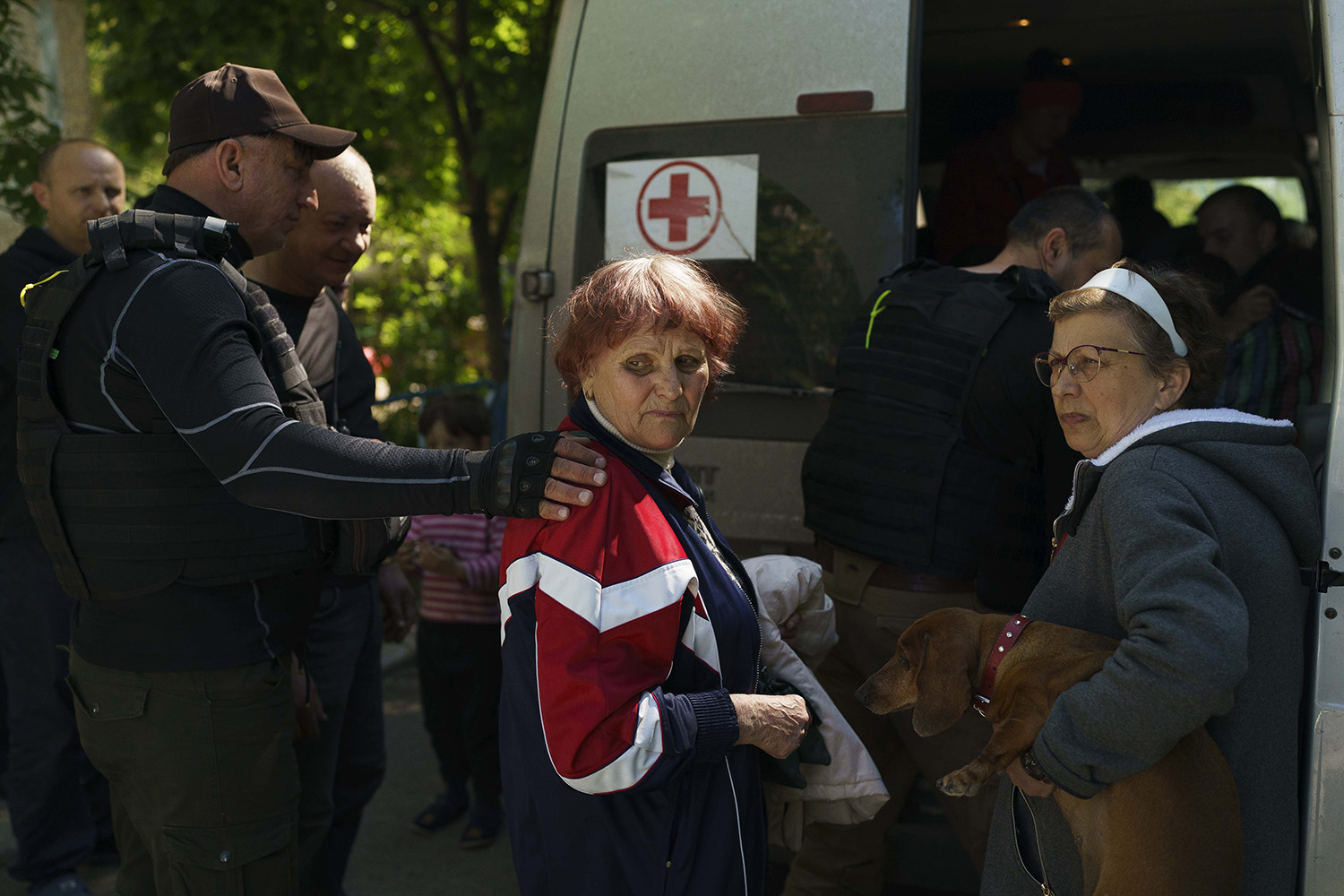 Oleg Tkachenko helps a Vuhledar evacuee into his van as he evacuates her and a number of her neighbors to relative safety in a shelter in Pokrovsk, Ukraine, on May 25.

Many in the region are living under sustained Russian fire with no access to water or electricity. They cook what little food they have on open flames, outdoors, in the gaps between the shelling. For older, poor, and sick people, the circumstances are particularly dire.

Tkachenko, who is willing to go where Ukrainian officials or international aid workers are not, brings food and other supplies to some of the most vulnerable Ukrainians on the front lines of the conflict. For many of them, he and other volunteers have become a critical lifeline.

“It was dangerous in 2014. It’s even more dangerous now. But my mission is to help people,” said Tkachenko, 52, a father of seven who has been making journeys like this since the conflict erupted in eastern Ukraine in 2014. Along with bread, potatoes, and benzine, he sometimes brings insulin and other much-needed medications. 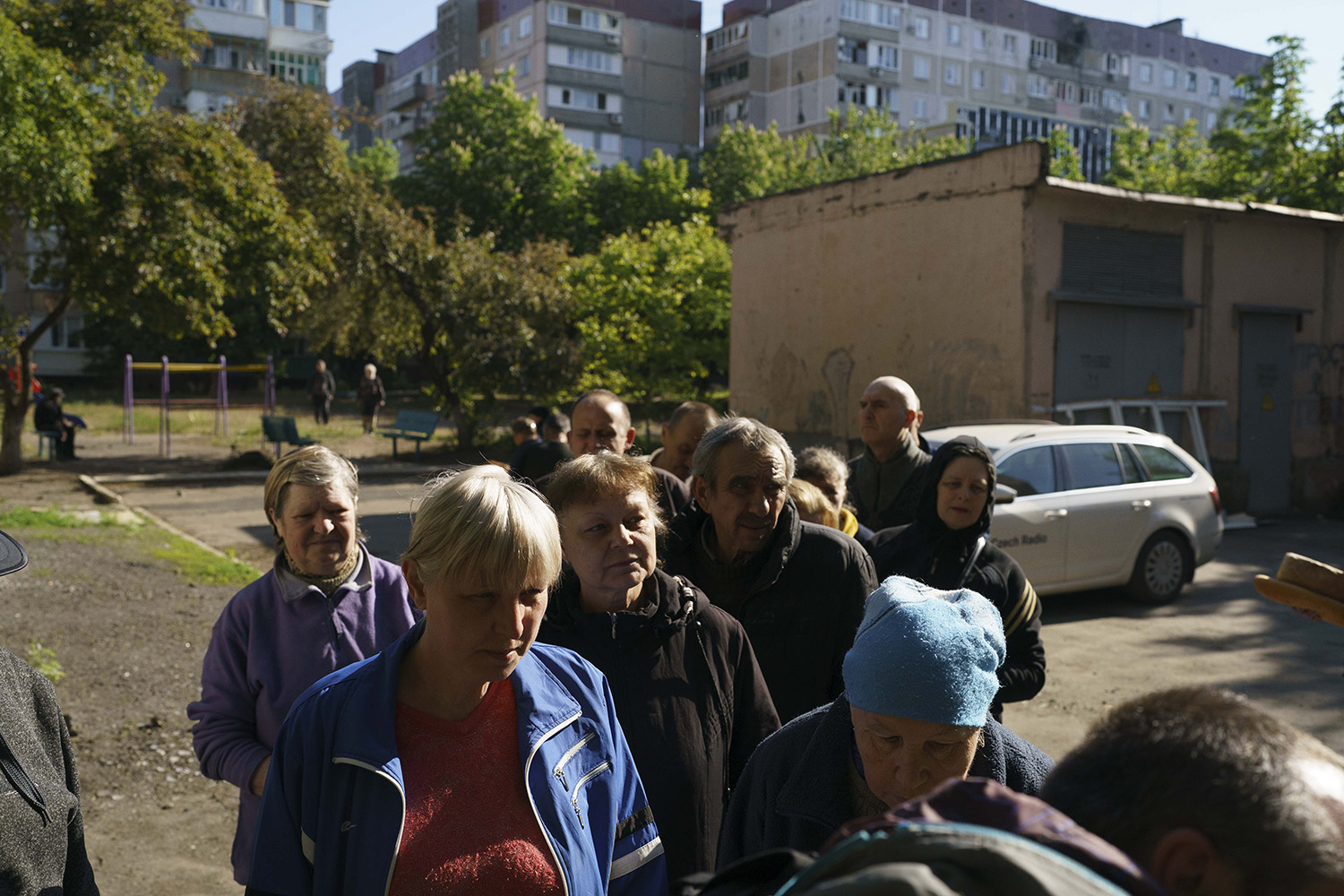 Vuhledar residents line up for supplies from Tkachenko’s van on May 25. 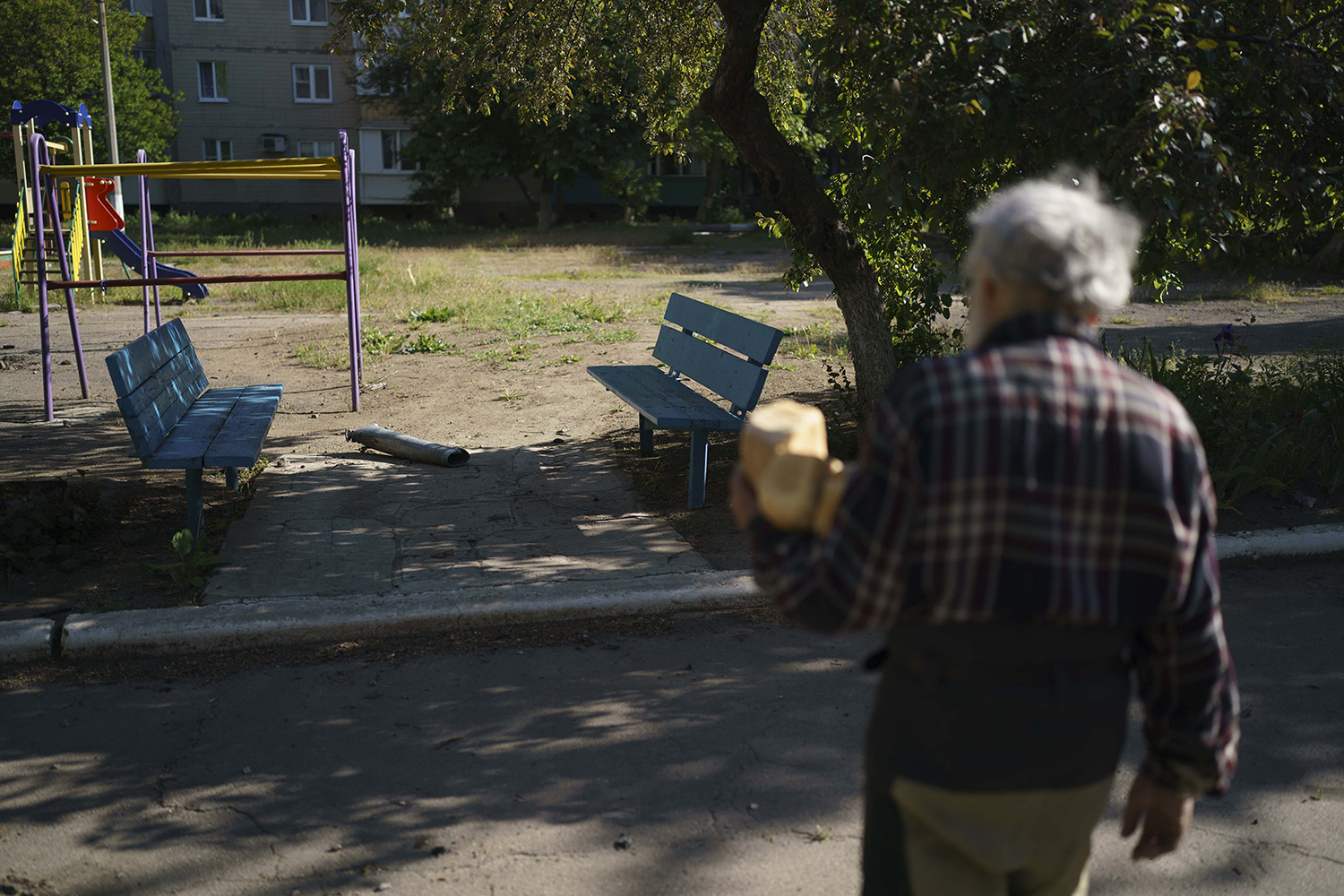 An older Vuhledar resident returns home with bread, brought by Tkachenko, as the remains of a rocket lie in a children’s playground on May 25.

“You can survive without water for three days or food for two weeks, but if you don’t have medicine, it might be hours,” he told Foreign Policy.

In the more than 100 days since the invasion, Russia has seized about a fifth of Ukraine’s territory—three times the size of the land taken in 2014. The fiercest fighting is centered in Sievierodonetsk, the most easterly Ukrainian-controlled city and an industrial hub. Half of the city was recaptured over the weekend during a counteroffensive, but 95 percent of the Luhansk region is now under Russian control.

Moscow’s forces have been making slow but steady progress, and if the last few settlements in the region fall, the Russian soldiers are expected to turn south to Donetsk and cities like Vuhledar. Sitting precariously adjacent to territory that has already fallen to the enemy, this settlement of just 17,000 people has been under attack since the first day of the war. The town hospital was hit with cluster munitions—which are banned according to international law—on Feb. 24, killing four people. Human Rights Watch called the strike “callous.” 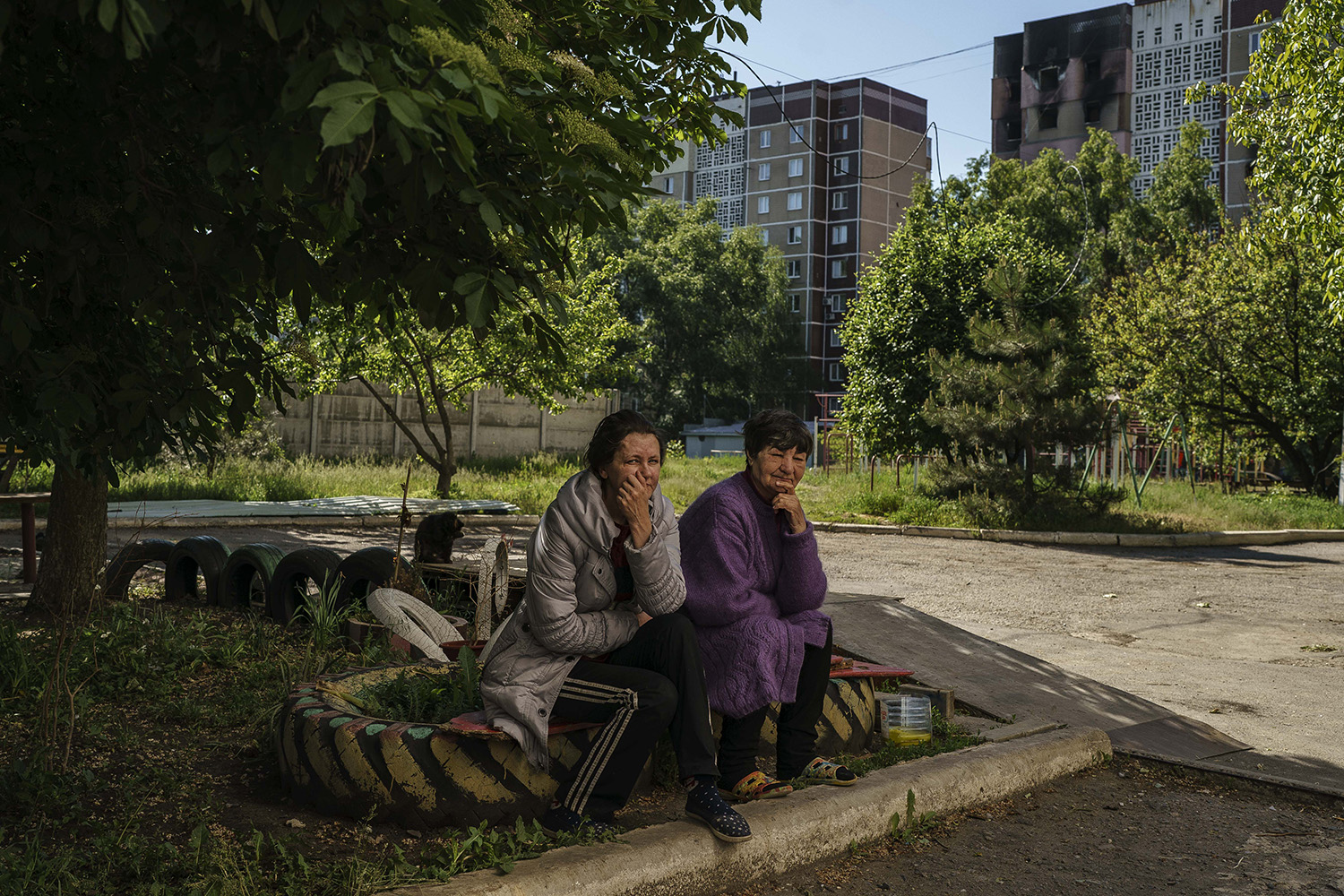 Two women rest in the shade in front of a burned-out residential block on May 25.

Residents say the artillery attacks have been so incessant since early April that they have been living in basements under their buildings around the clock. In a complex of boxy residential apartment blocks, Tatyana, 64, points to a hole where her apartment used to be on the second floor. The building’s facade is charred, one entrance walkway has been completely ripped away, and the empty pipes of Soviet-era rockets lie on the ground.

“They shell every evening. They shelled last night and this morning. Every day. On Sundays, it is all day long. We can’t even make a fire outside to cook. We can no longer bear it,” said Tatyana, who did not want her full name disclosed.

She showed Foreign Policy an improvised graveyard that residents had made in a quiet seating area under the shade of some lush trees. Three mounds of earth sat in a row marked with crosses cobbled together from plastic and wooden dowels. “They died just because they were old, and we had to bury them under incoming fire,” she said. “They will be buried properly later.” 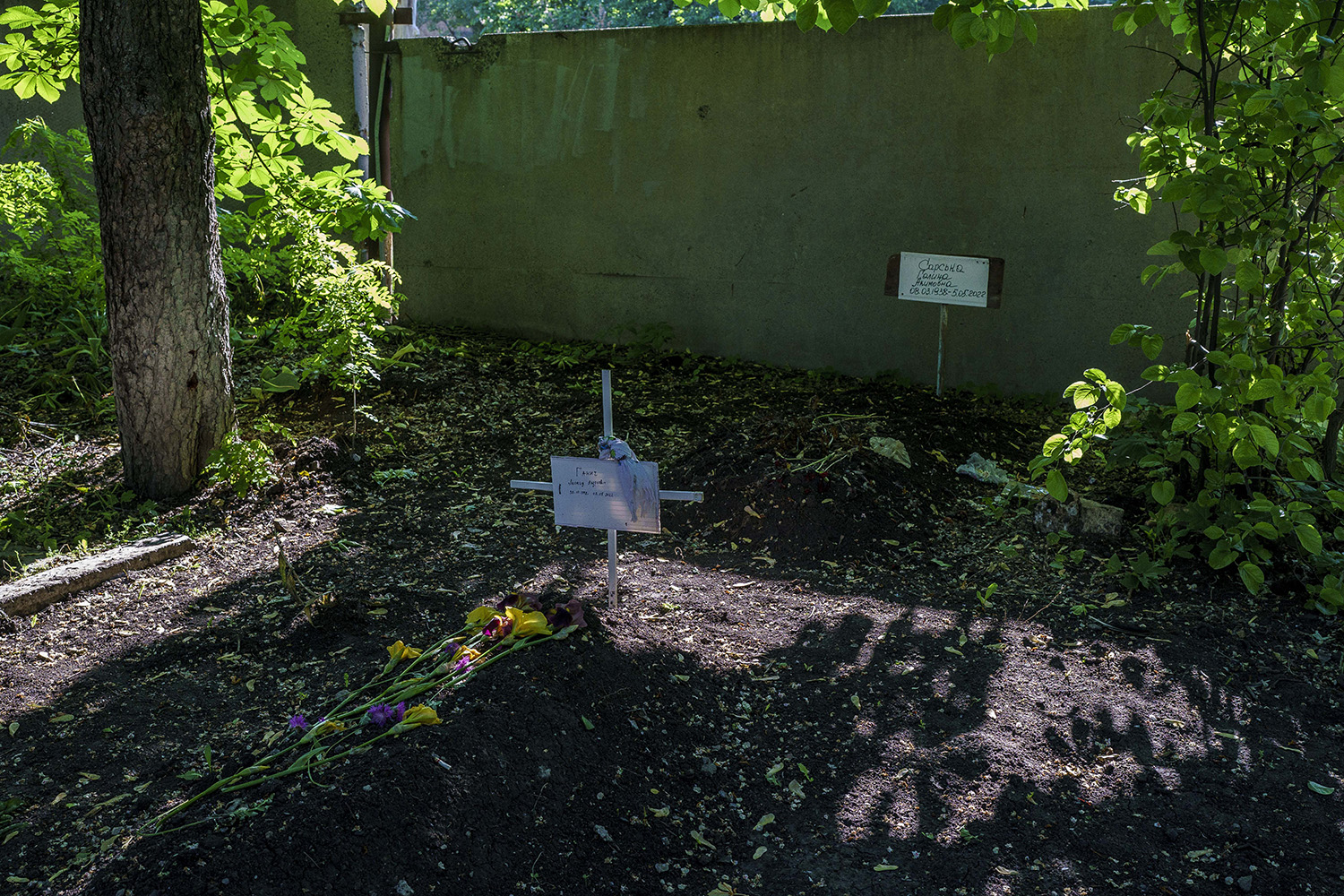 Temporary shallow graves dug by Vuhledar residents to bury the deceased until they can be given a proper burial on May 25.

As the crack-boom of shelling begins to draw dangerously close, Tkachenko jumps back in his van and speeds off. At his next stop, another complex of residential blocks, people appear from every direction to line up, desperate for what they say is the only food supply they have. They grab at loaves of bread and become aggressive.

The severity of the situation in the front-line settlements of the Donbas has led to fears that Russia will employ the same playbook used in Mariupol, where months of siege killed as many as 50,000 people, according to reporting by the Guardian. Neither side has shown a willingness to make concessions, with Ukraine pushing for victory and Russia pledging to keep going until it has achieved its goals—which remain largely undefined.

“We’ve had no electricity since March 15 and no gas since April 10,” said another resident, 62, who gave his name as Vyacheslav. He takes me down a set of concrete stairs into the cold, damp underground storage room where five members of his family sleep. Wooden pallets are made up as beds. He said the only light at night comes from candles and an oil lamp. His 11-year-old granddaughter, Katya, said the walls shake every time there is an explosion. She was clutching her beloved cat.

“On March 19, the shops were destroyed. I don’t even know how—they just disappeared. The water went out because of shelling even before the war,” Vyacheslav said. 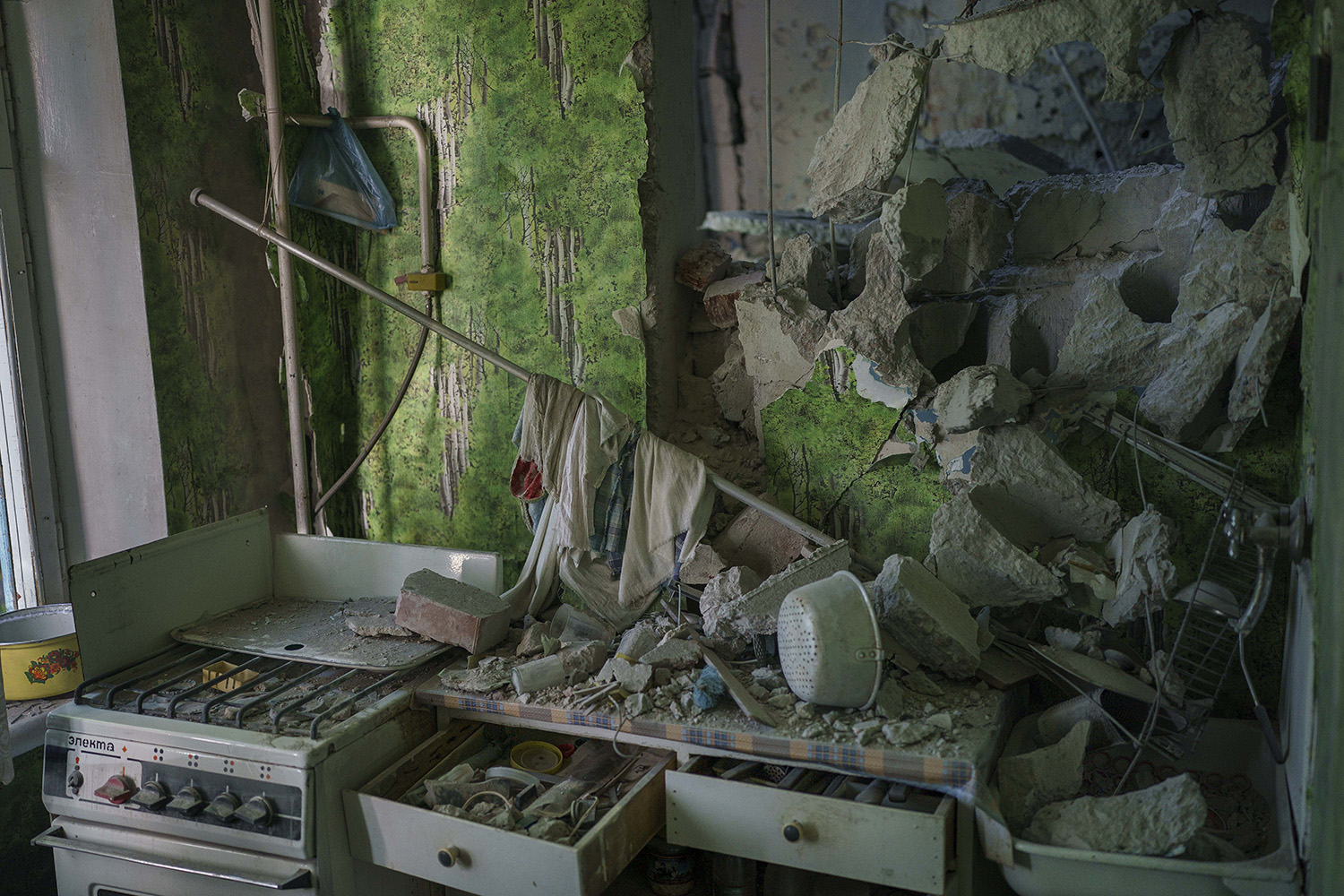 The destroyed kitchen of a home in Vuhledar, where residents have spent months living in the underground basements of their buildings due to regular shelling since the start of Russia’s war in Ukraine, on May 25. 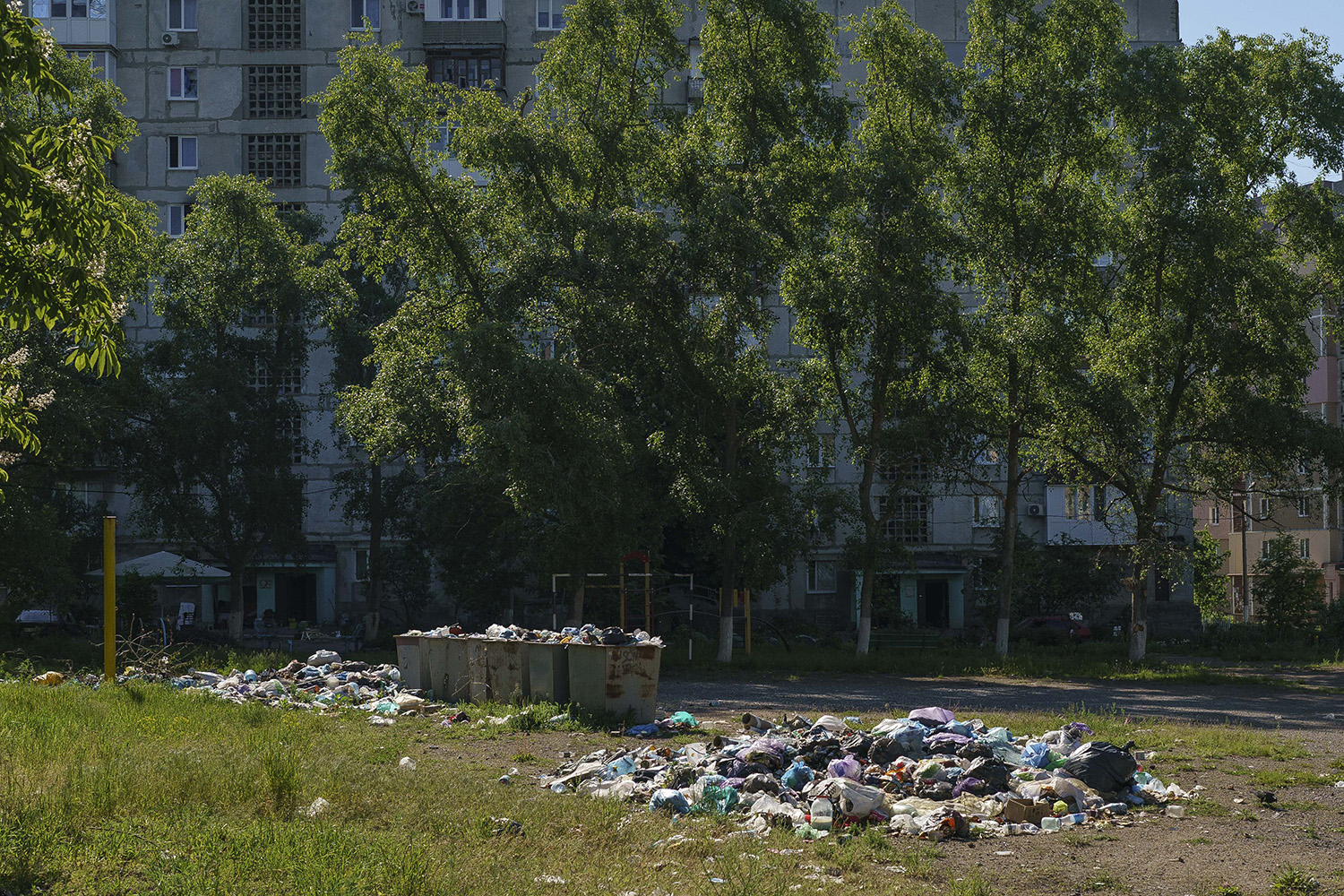 Uncollected trash piles up in a residential apartment complex, cut off from trash service for months due to heavy Russian attacks, in Vuhledar on May 25.

“Nobody takes the rubbish. Now it’s starting to get warm, the smell will be worse every day. There are a lot of flies, and we’re worried about diseases,” Vyacheslav said.

Residents say the only water they have is what they can filter from technical water, usually used by industry and unsuitable for human use.

Despite the risks Tkachenko takes, he says he is not always welcome. As a Protestant in a majority Orthodox country, he’s often eyed suspiciously.

Protestants in Ukraine make up only about 2 percent of the total population. Tkachenko’s Vuhledar church had a congregation of just 33 before he fled to the evacuee hub of Pokrovsk two months ago. His charity bakery was hit by a missile, leaving a hole in the roof, and he has been living in a shelter ever since.

To make matters more complicated, years of exposure to Russian propaganda have left their mark on the majority Russian-speaking east. The remaining residents of Vuhledar I spoke to—every one of them—said they believed they were under attack from the Ukrainian military, not Russia, a common refrain from the Kremlin-controlled media. 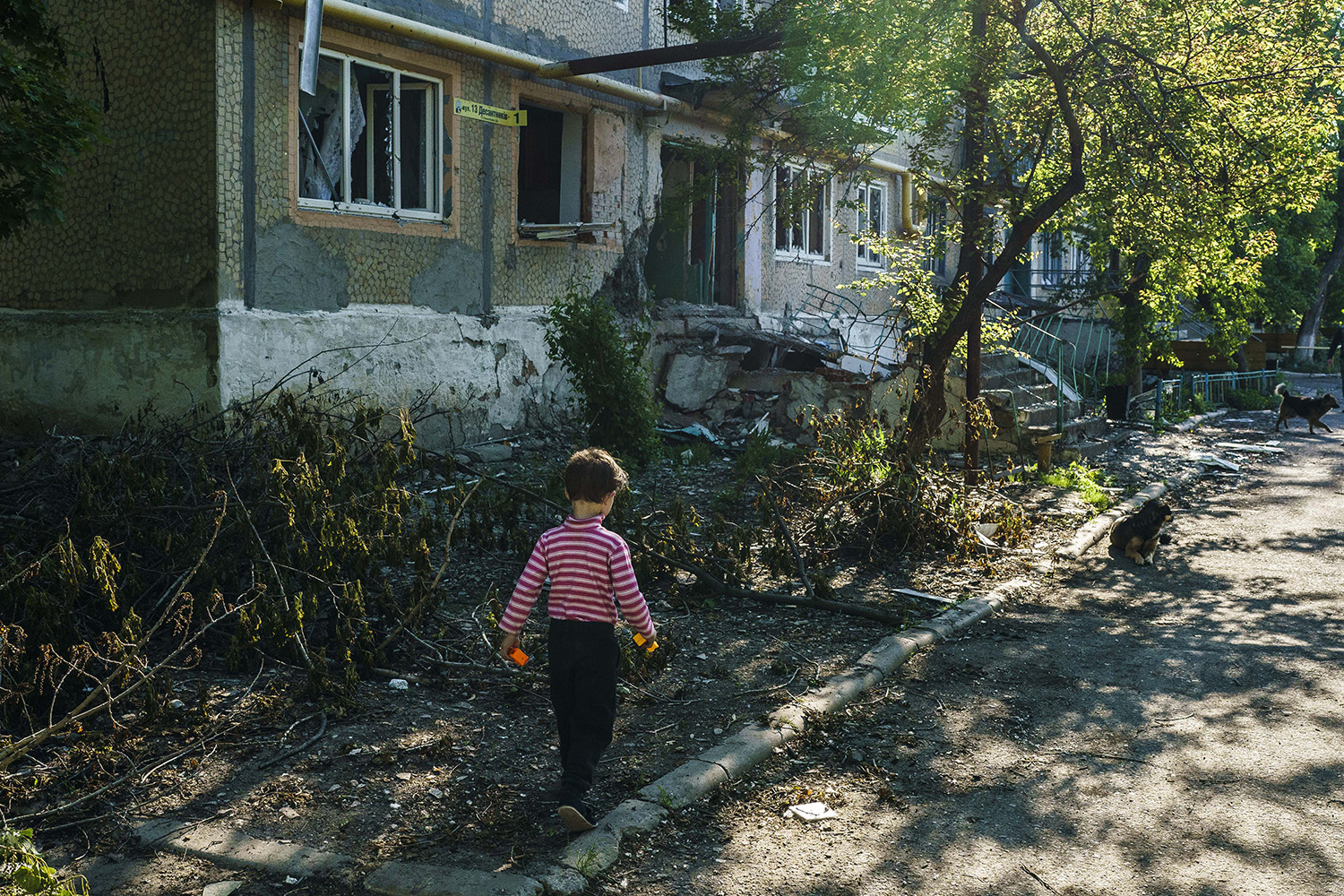 A small child plays in front of a destroyed apartment block in the gaps between shelling on May 25. 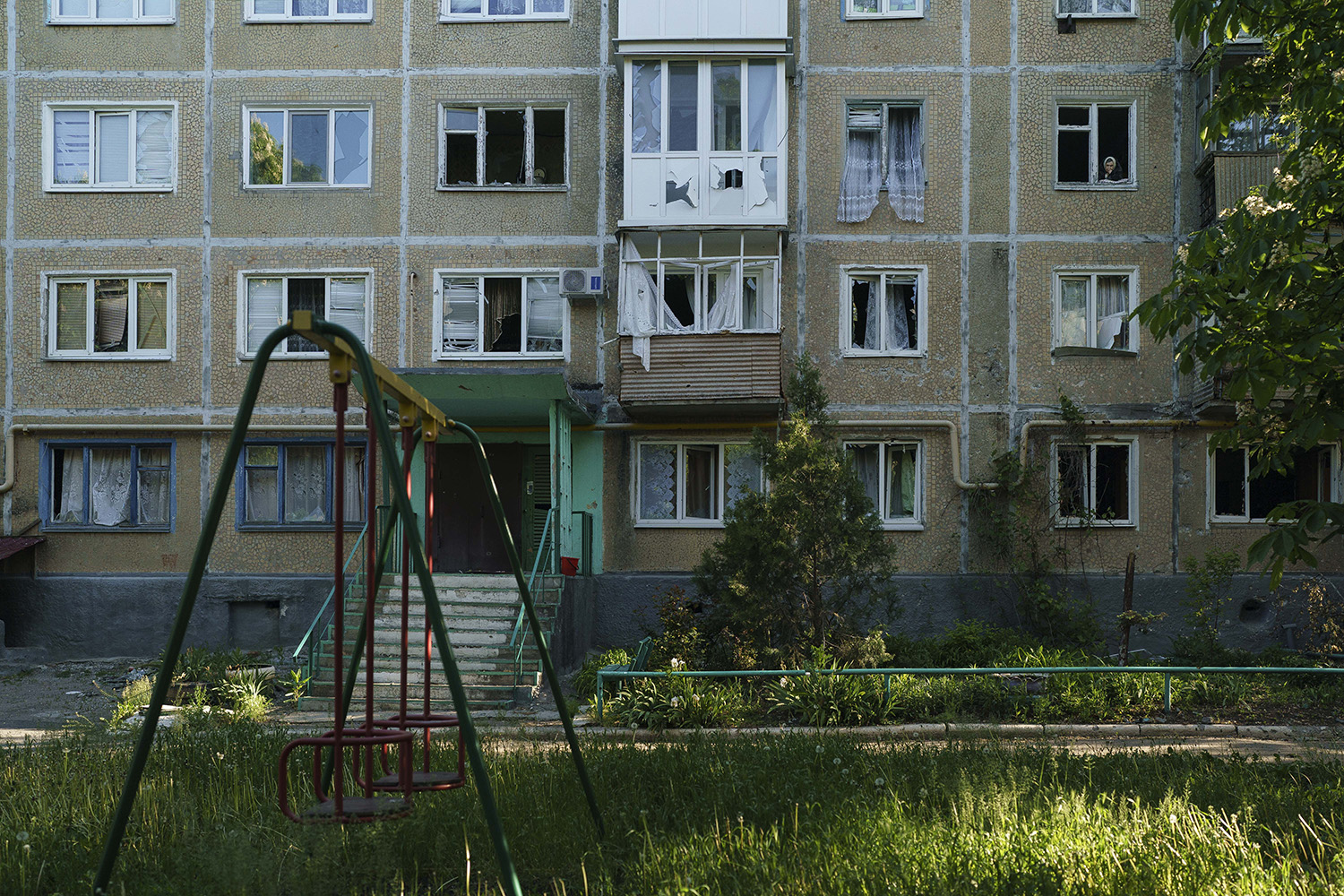 An older woman who refused to leave her apartment peers out from the window of a destroyed building on May 25.

I ask Tkachenko how he can continue to risk his life to help people who have sympathies toward Russia. “How can you hold it against someone if they’re sick?” he said, referring to what he termed as brainwashing.

“I am 100 percent sure we will win the war, and then we will work to fix these deep-rooted ways of thinking,” he said.

“For now, my main worry is that if Russia takes control of the road to Vuhledar, we will no longer be able to supply food or insulin. What will people do then?”