A 10-day world tour ended with a meeting of NATO defense ministers in Brussels.

Alright, back to work. Here’s what’s on tap for the day: U.S. Defense Secretary Lloyd Austin tries to walk and chew gum between deterring China and helping Ukraine on a three-country tour, the White House sends a slew of new diplomatic nominations to the Senate, and Dutch intelligence services blow up a wild Russian plot.

Alright, back to work. Here’s what’s on tap for the day: U.S. Defense Secretary Lloyd Austin tries to walk and chew gum between deterring China and helping Ukraine on a three-country tour, the White House sends a slew of new diplomatic nominations to the Senate, and Dutch intelligence services blow up a wild Russian plot.

BRUSSELS—NATO nations are preparing to significantly bulk up the 30-country alliance’s forces in Eastern Europe, NATO Secretary-General Jens Stoltenberg said today, part of a plan to stand tall in the face of Russia’s military revanchism as Europe faces its most serious security threat from the Kremlin since the Cold War with Russia’s full-scale invasion of Ukraine.

“Russia’s aggression is a game-changer, so NATO must maintain credible deterrence and strong defense,” Stoltenberg said.

“This will mean more NATO forward-deployed combat formations to strengthen our battlegroups in the eastern part of our alliance. More air, sea, and cyber defenses, as well as prepositioned equipment and weapon stockpiles,” he added.

But Stoltenberg’s announcement—which came on the heels of a 30-nation defense ministerial, a U.S.-led meeting to provide more military aid to Ukraine, and just hours before U.S. Defense Secretary Lloyd Austin was set to return home—underscored one constant: No matter where you go, the United States is at the center of the room.

“We are walking and chewing gum,” Austin told reporters traveling with him in Thailand this week. “We’re able to do that because [of] the strong network of alliances and partnerships that we have around the globe.”

Unlike Austin’s first global trek in February and March 2021 that sought to root U.S. President Joe Biden’s foreign policy in Asia, Russia’s grinding invasion of Ukraine’s Donbas region has shown that the United States still can’t help but be in every room.

At the Shangri-La Dialogue in Singapore, Austin, a former West Point rugby player, towered over 500 delegates on two massive screens, playing a dueling banjo to his nominal Chinese counterpart. After the United States pledged $1 billion more in U.S. military aid to Ukraine on Wednesday (another meeting where Austin was at the center of the room), the tableau of American flags at Austin and Chairman of the Joint Chiefs of Staff Gen. Mark Milley’s press conference at NATO headquarters was so thick that it blotted out the alliance’s compass logo on the wall behind them.

In Europe, it was clear that the United States—despite facing a riot that ransacked the U.S. Capitol, inflation, war in Ukraine, and a resurgent pandemic in the months since Biden’s election—remains the global crisis hotline of choice. U.S. troops will add boots on the ground and preposition stocks for the new NATO presence in Eastern Europe, providing the logistical muscle for a presence likely to be spread across the Baltics, Poland, and Romania.

This reporter (Jack here)—given a quick glimpse of the 51-nation Ukraine military aid meeting in a massive, unnamed conference room in Brussels—saw a forum so packed that some non-alliance members, such as tiny Ecuador, had to phone in on Zoom. And with NATO’s Madrid summit, where the alliance will hash out a new strategic concept, less than two weeks away, the United States will also need to play a leading role in talking Turkey down from a bid to slow down Sweden and Finland from joining the alliance over their policy toward Kurdish separatists.

But the problem is that’s also the case in Asia, where U.S. officials tried to make historical antagonists Japan and South Korea play nice in the sandbox amid North Korean nuclear finger-wagging, soothe tensions with China, and show Southeast Asia’s 10 nations that the Biden administration is still engaged in the region.

Senior U.S. defense officials insisted throughout the trip—aboard the E-4B and in hotel waiting rooms that transformed into diplomatic enclaves as American, Singaporean, Japanese, and Chinese delegations passed through—that they are not trying to create an Asian equivalent of NATO. And despite what Austin said, the lack of a regional equivalent to NATO in Asia is causing policy headaches.

“One of our long-standing objectives is having a more networked security architecture in the Indo-Pacific,” a senior U.S. defense official said. “There are different constellations based on different security requirements and different, frankly, historic relationships.”

“Policymakers in Washington will probably be forced to adopt a slower, perhaps less robust pivot to the Indo-Pacific than they intended before Russia’s unprovoked invasion of Ukraine,” the Foundation for Defense of Democracies’ Craig Singleton told SitRep in a text message. “Such moves are certainly better than no pivot at all or policymakers deluding themselves into thinking that the current crisis in Europe does not alter America’s long-term national security interests.”

The State Department is also expected to announce Desirée Cormier Smith as the special representative for racial equity and justice, a newly-created post, as Robbie first reported.

Over at the Defense Department, Biden has nominated Radha Iyengar Plumb to be a deputy undersecretary of defense for acquisition and sustainment, the Pentagon’s No. 2 weapons buyer. Plumb is currently the chief of staff to Deputy Defense Secretary Kathleen Hicks and was a one-time co-host of the War on the Rocks’ Bombshell podcast.

Lauren Speranza is joining the Pentagon’s strategy shop to work on U.S. defense plans in Europe and elsewhere. Speranza comes from the Center for European Policy Analysis, where she served as director of trans-Atlantic defense and security.

“On these grounds the intelligence officer was refused entry into the Netherlands in April and declared unacceptable,” the AIVD said in a statement. “He was sent back to Brazil on the first flight out.”

Collateral damage. The State Department and Pentagon failed to assess the extent to which U.S.-made weapons were used to kill civilians in Yemen’s devastating civil war, according to a newly released internal government watchdog report from the Government Accountability Office.

The United States provided $54.6 billion of military support to Saudi Arabia and the United Arab Emirates between 2015 and 2021. Both countries were involved in the war in Yemen, fighting Iran-backed Houthi rebels. The conflict pushed Yemen into what is considered the worst humanitarian crisis in the world and sparked fierce political debates over a U.S. president’s war power authorities back in Washington.

Take it back. Ukrainian Defense Minister Oleksii Reznikov, in just his second interview since Russia’s full-scale invasion nearly four months ago, told CNN that the Western weapons provided to Kyiv—including $5.6 billion in U.S. military aid pledges—will allow Ukrainian troops to take back Crimea, which the Kremlin has occupied since 2014.

A French diplomatic source also told CNN that Paris would like to see Ukraine take back the Russian-occupied territory, which has helped Russia enforce a devastating maritime blockade in the Sea of Azov and Black Sea.

Heading north. A bipartisan group of eight senators are planning to travel to Finland and Sweden later this month to shore up U.S. support for the two countries’ bids to join NATO as full-fledged members in the wake of Russia’s invasion of Ukraine. Democratic Sen. Jeanne Shaheen and Republican Sen. Thom Tillis are leading the congressional delegation (or “codel” as they’re called in the biz), which will also make appearances at the upcoming NATO summit in Madrid.

Nearly every NATO leader was hoping to announce Finland and Sweden formally joining the alliance at the summit…key word here: “nearly.” Turkish President Recep Tayyip Erdogan has thrown a wrench into those plans, leaving the two countries in limbo. (Bringing a new member into the alliance requires unanimous consent from all current 30 members.) 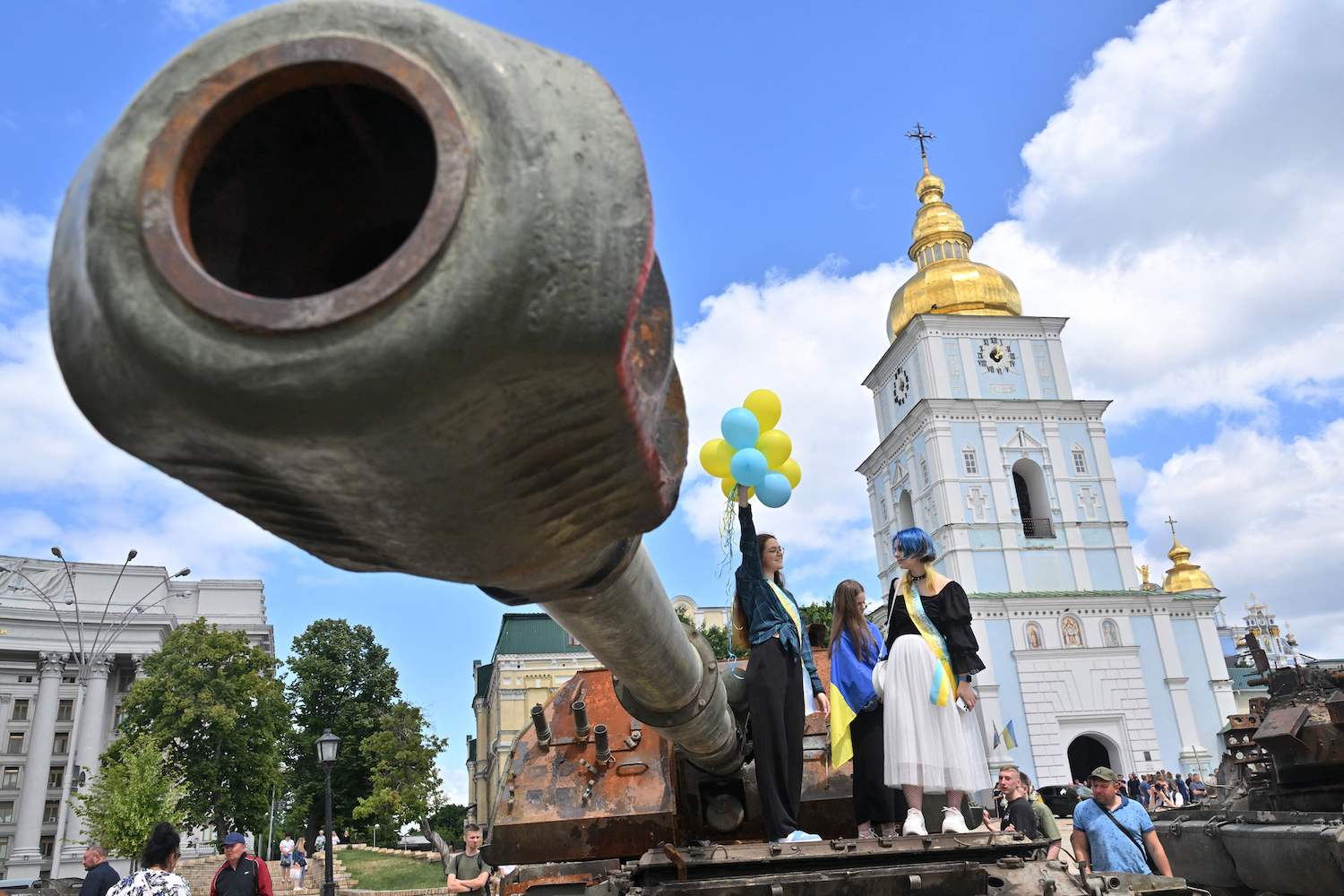 School graduates stand atop a wrecked tank, which is displayed as part of an outdoor exhibition of destroyed Russian military equipment, in the center of Kyiv, Ukraine, on June 14.SERGEI SUPINSKY/AFP via Getty Images

“European fans of frogs, liverwurst and spaghetti love visiting Kiev. With zero use. Promised EU membership and old howitzers to Ukraine, lushed up on gorilka and went home by train, like 100 years ago. All is well. Yet, it won’t bring Ukraine closer to peace. The clock’s ticking.”

—Former Russian President Dmitry Medvedev, taking to Twitter to apparently blame Europe’s food tastes for the lack of peace in Ukraine. What do we think? It’s sort of hard to tell what he’s saying.

Never give up. U.S. Defense Secretary Lloyd Austin’s last hotel stop of a 10-day, around the world tour in Brussels—where Jack is tagging along for the ride—is full of wine mom-style motivational quote paintings right out of a YouTube video. Some of Jack’s favorites: “Never give up” and “Strong people don’t just happen. They are made.” Now you know where to stop in Europe if you’re lacking inspiration.

That’s globalization, baby. Swag bags given out at a recent CEO summit aimed at promoting U.S. industry had gifts bearing the slogan “Made in China,” as the Guardian reports. Because of course. Biden and top U.S. business executives attended the event during the Summit of the Americas in Los Angeles last week.

You are commenting as . Change your username | Log out
Tags: Department of Defense, Security, U.S. Secretary of Defense

NEW FOR SUBSCRIBERS: Want to read more on this topic or region? Click + to receive email alerts when new stories are published on Security