India Plays BRICS to Its Interests

New Delhi makes a fairly safe gamble by supporting the group—without putting itself at odds with the West.

The highlights this week: India strikes a careful balance at the annual BRICS summit, a deadly earthquake compounds Afghanistan’s suffering, and protests erupt in India over a new military jobs plan.

The highlights this week: India strikes a careful balance at the annual BRICS summit, a deadly earthquake compounds Afghanistan’s suffering, and protests erupt in India over a new military jobs plan.

The BRICS group (Brazil, Russia, India, China, and South Africa) may seem like legacy software: a once-promising innovation now eclipsed by more effective alternatives. The group held its first summit in 2009—minus South Africa—and pioneered so-called minilateralism. But its members have struggled to implement their vision for trade and economic structures outside the U.S.-dominated financial system, in part because of their own economic challenges.

BRICS, which held its annual summit virtually on Thursday, retains relevance simply by virtue of its membership. The countries make up nearly one-quarter of global GDP. For India, which seeks a permanent seat at the global high table, BRICS still provides benefits. However, the presence of India’s rival China—and the greater role it seeks to assert within the group—poses challenges. BRICS can still work for New Delhi, but it must perform a careful balancing act.

BRICS brings several advantages to India. Its aim to create economic alternatives for countries in the global south reflects a long-standing foreign-policy goal for New Delhi, harkening back to its leadership of the Non-Aligned Movement. Participation in a non-Western grouping balances India’s growing partnerships with the West, a key aspect of its strategic autonomy policy. (BRICS, however, lacks the momentum and common purpose of the Quadrilateral Security Dialogue, made up of Australia, India, Japan, and the United States.)

Intra-BRICS trade, while modest, presents opportunities for India in key markets, including China, which remains an important commercial partner despite security tensions. India also supports the BRICS goal of shielding members from the economic fallout of Russia’s war in Ukraine. And unlike within the Quad, the Ukraine issue does not create tension for India within BRICS.

Still, BRICS presents a few problems for India because China, which currently holds the group’s rotating presidency, appears determined to scale up its clout. Ahead of the summit, Chinese state media trumpeted the BRICS’s “China Year.” Beijing also hopes to expand membership, thus growing its influence. India works with China in other multilateral groups—such as the Asian Infrastructure Investment Bank and the Shanghai Cooperation Organization—but they are not battlegrounds for competition, whether because of their narrow focus or larger size.

Buoyed by its growing friendship with Russia and intensifying competition with the United States, China appears keen to position BRICS as a counterweight to U.S.-led institutions. It could use the group as a platform for anti-U.S propaganda framed around U.S. sanctions on Russia and broader U.S. hegemony. This would go against India’s strategic autonomy policy; New Delhi also seeks to avoid being seen as part of an anti-U.S. bloc.

India should thus ensure that the group’s public statements refrain from confrontational rhetoric against the United States, even while quietly endorsing BRICS policies that won’t go down well in the West, such as stepped-up economic cooperation with Russia. The summit produced a long joint statement that plays to India’s interests, emphasizing combating COVID-19, cooperating on economic development, and curbing climate change. It featured no direct criticism of the United States.

Indian Prime Minister Narendra Modi will participate in a G-7 summit in Germany just after the BRICS meeting, underscoring how India deftly manages its relationships. Going forward, India can make a fairly safe gamble: It can pledge support for BRICS activities to show its loyalty and welcome continued cooperation while banking on the likelihood that BRICS won’t move quickly on implementing them—sparing New Delhi from putting itself at odds with the West.

Deadly earthquake hits eastern Afghanistan. A magnitude 5.9 earthquake struck the eastern province of Khost, Afghanistan, on Wednesday, killing at least 1,000 people. The earthquake was felt across Pakistan, including in the capital, Islamabad. Afghanistan suffered the greatest damage and will need significant help from abroad. The reduction in international aid since the Taliban’s takeover last August has devastated the country’s already weak emergency response and health care capacity. Bad weather has further hampered rescue efforts.

The earthquake came amid other natural disasters in South Asia, driven by climate change: Massive flooding has displaced hundreds of thousands of people in northeastern Bangladesh and neighboring India. According to the United Nations, up to 4 million people are in urgent need of help in Bangladesh, where early monsoon rains have flooded the Surma River. In Meghalaya, India, 38 inches of rain were measured on Sunday. The floods follow a heat wave that brought record highs to the region in April. 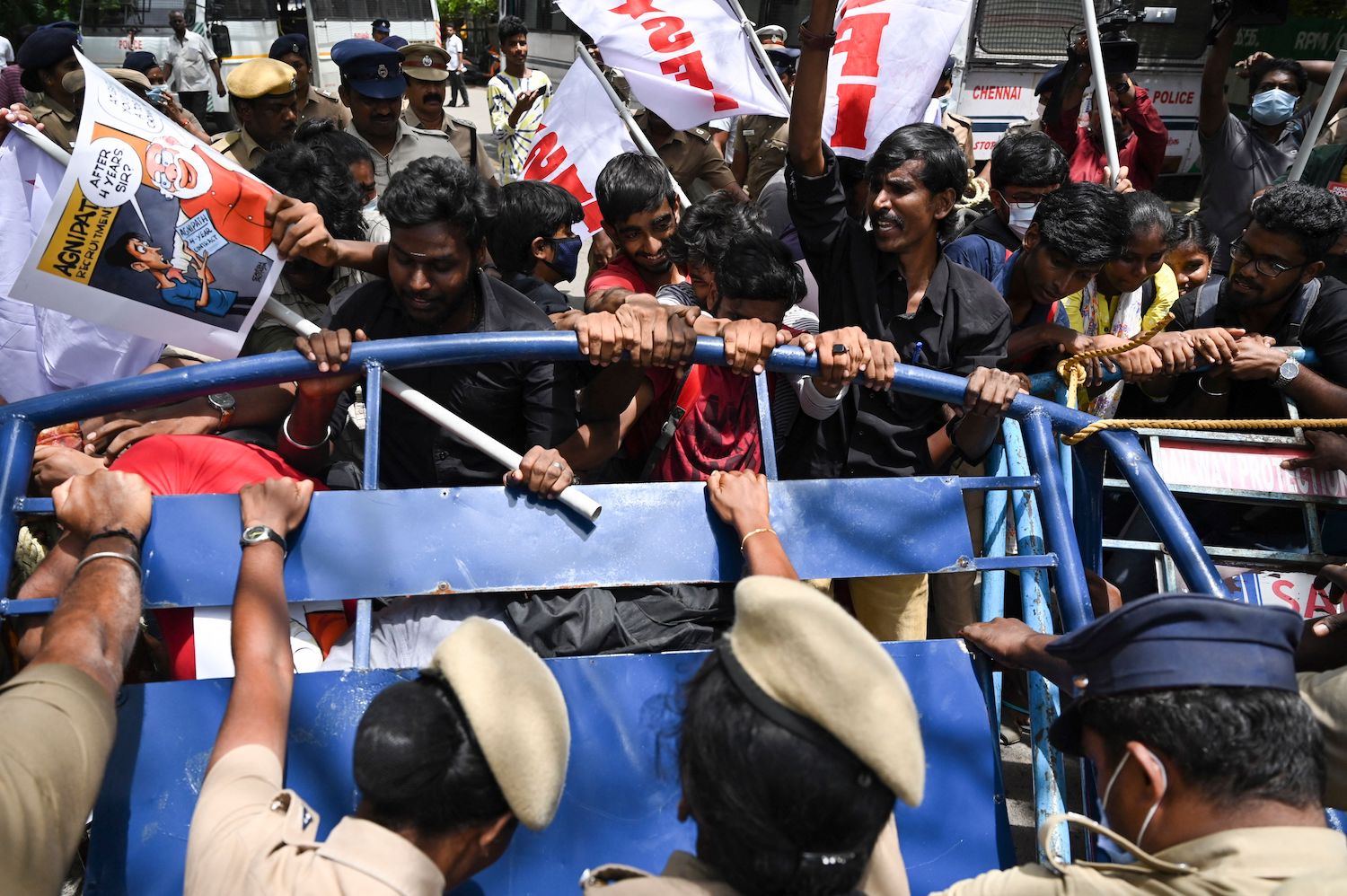 Members of the Student Federation of India push against a police barrier during a protest against the government’s new Agnipath recruitment plan in Chennai, India, on June 22.ARUN SANKAR/AFP via Getty Images

Protests over Indian military jobs program. Protests against a controversial military jobs plan have spread across India, leading officials to cancel more than 500 train routes due to concerns about violence. The Agnipath (“path of fire”) initiative provides four-year contracts for soldiers between ages 17 and 23. The catch is that only 25 percent of soldiers will keep those jobs afterward—and then only for 15 years.

India’s government says the move intends to free up revenue, as long-term military salaries and pensions eat up the defense budget. Many of those protesting Agnipath are angry that they will be deprived of long-term, stable employment in the military, a top source of jobs in India. Some state officials said those that complete the contracts will be prioritized for policing jobs.

The issue reflects two familiar storylines in India. First, unemployment persists despite economic growth, which has prompted other recent protests. Agnipath is also the latest in a long line of policies implemented by the current government without much prior consultation with external stakeholders. (Other examples include a demonetization plan, the decision to strip the Jammu and Kashmir region of its autonomy, and the nationwide lockdown in 2020.)

The previous government, led by former Pakistani Prime Minister Imran Khan, has already claimed credit for the achievement. But Khan could also be faulted for taking four years to complete the action plan. Nonetheless, FATF’s announcement was met with relief in Pakistan. Watch list status leads some banks and investors to shy away from injecting capital into the financial system. Facing a significant economic crisis, Pakistan can’t afford to lose any more investment.

IMF talks begin in Sri Lanka. This week, International Monetary Fund (IMF) negotiators arrived in Colombo, Sri Lanka, for critical talks with the government on a potential bailout plan. The talks came as the government ordered schools and some offices to close to preserve scarce fuel supplies. On Thursday, Sri Lankan Prime Minister Ranil Wickremesinghe told the Sri Lankan Parliament that the economy has “completely collapsed.” The IMF negotiators are expected to be in Sri Lanka until June 30.

On Tuesday, a mob charged into a soccer stadium in Male, the capital of the Maldives, and attacked people taking part in an Indian Embassy event to commemorate International Day of Yoga. Police stopped the attackers before any serious violence took place; they said some attackers carried flags and placards traced back to an opposition party led by former Maldivian President Abdulla Yameen.

The India-China rivalry plays out in domestic politics in the Maldives. Yameen is seen as a pro-China figure, whereas current Maldivian President Ibrahim Mohamed Solih’s party has launched campaigns calling for closer ties with New Delhi. The opposition Progressive Party has taken critical and even hostile positions toward India, launching an “India Out” campaign in 2020, which railed against an alleged Indian military presence in the Maldives. The current government banned the campaign this year.

The attack may also have religious undertones. Before it took place, some social media posts had decried yoga as a Hindu practice that wasn’t welcome in the majority-Muslim Maldives. Along with other recent violent incidents, it underscores how religion has become a deep fault line in South Asia, rendering elusive cooperation even more difficult.

Daily Star deputy editor Aasha Mehreen Amin discusses the corruption risks associated with electronic voting machines in Bangladesh: “It may seem like the simplest thing—to remove unruly elements from voting booths, but in Bangladesh’s reality ‘goons and ghouls’ dominate everything, especially how politics is played out on the ground,” she writes.

Lawyer Gautam Bhatia argues in the Hindustan Times that India’s speech laws need to be revisited: “The only long-term solution, therefore, is to repeal the blasphemy law, stop prosecutions for religiously offensive speech, and focus on articulating a clear definition of hate speech, backed by social consensus,” he writes.

Writer Aamna Shahid Sial laments how Pakistani cinema struggles to compete with the international film industry in a letter to the editor in Pakistan Today: “Filmmakers need to think differently, diversify and explore in various genres, such as Indie, neo-noir and period films. They should stop underestimating the level of intelligence and taste of the local viewers.”

You are commenting as . Change your username | Log out
Tags: Foreign & Public Diplomacy, India

NEW FOR SUBSCRIBERS: Want to read more on this topic or region? Click + to receive email alerts when new stories are published on Foreign & Public Diplomacy, India