Seoul aims to become one of the world’s top arms exporters.

Welcome back to Foreign Policy’s SitRep! Before we get to our regularly scheduled programming, if you haven’t done so already, take a few minutes to marvel at the new high-definition imagery coming out of deep space, courtesy of the James Webb telescope.

Alright, back to more earthly matters, here’s what’s on tap for the day: How South Korea is becoming a top global arms exporter, a new report warns of laggard U.S. missile defense capabilities, and Congress sours on F-16 sales to Turkey.

Welcome back to Foreign Policy’s SitRep! Before we get to our regularly scheduled programming, if you haven’t done so already, take a few minutes to marvel at the new high-definition imagery coming out of deep space, courtesy of the James Webb telescope.

Alright, back to more earthly matters, here’s what’s on tap for the day: How South Korea is becoming a top global arms exporter, a new report warns of laggard U.S. missile defense capabilities, and Congress sours on F-16 sales to Turkey.

The Business of Booms Is Booming in South Korea

There’s been a not-so-quiet revolution taking place in South Korea in recent years, and it’s all about the defense industry.

Since former President Moon Jae-in first took power in 2017, South Korea has turbocharged its arms sales abroad, positioning the country to become one of the world’s leading arms exporters and vastly outpacing the rest of the world in increasing the volume of its arms exports. Under the new conservative government, led by Yoon Suk-yeol, that trend shows no signs of slowing down.

The numbers telling the story. In 2000, South Korea ranked 31st on the list of global arms exporters. By 2021, it rocketed up to eighth place, according to data from the Stockholm International Peace Research Institute (SIPRI) Arms Transfers Database. Its volume of major arms exports shot up 177 percent in the 2017-2021 period, compared with the period between 2012 and 2016, according to SIPRI—vastly outpacing the growth of other major arms exporters such as the United States, Russia, China, and France.

South Korea expects its defense exports to top $10 billion in 2022, more than triple the amount it sold annually between 2010 and 2020. (In 2021, defense exports exceeded defense imports for the first time there.)

Deals on deals on deals. Among the recent blitz in multimillion- and multibillion-dollar arms sale deals that South Korea has clinched so far: K9 self-propelled howitzers to Australia, India, and Egypt; medium-range surface-to-air missile systems to the United Arab Emirates; and anti-air defense systems to Saudi Arabia.

Russia’s war in Ukraine has presented Yoon’s government with more opportunities, as European governments scramble to backfill their own military supplies after frantically shipping their excess equipment to Ukraine to fend off the Russian invasion. Poland, for example, is expected to greenlight some major arms deals with South Korean arms manufacturers for tanks, infantry fighting vehicles, and self-propelled artillery.

Watch out, Pyongyang. Seoul’s pivot to becoming a major global arms exporter is aimed at expanding the country’s domestic economic strength and flexing its military muscles for rivals such as North Korea and potential competitors such as China, particularly as global competition between Beijing and Washington heats up.

It also comes as South Korea’s defense establishment, wary of how the country’s declining population will affect its conscription-fed army, is looking to rely on new military technology to make up for its waning manpower.

Looking global. Yoon also appears to be using defense sales to showcase a more globally focused South Korean foreign policy, something that was on display at the recent NATO summit in Madrid. During the summit, Yoon sought to burnish South Korea’s credentials as a leader on international security matters while at the same time taking meetings with Central European leaders to hash out new arms sale deals.

The blowback. The deluge of arms sales is already coming with costs beyond the dollar signs, however. South Korea has caught heat from human rights groups for business dealings with Myanmar’s military, accused of widespread atrocities and war crimes—though it suspended military exchanges with Myanmar after a military coup in 2021.

The White House has tapped Nahid Bhadelia to be senior policy advisor for the global COVID-19 response. Bhadelia was previously an infectious diseases expert at Boston University.

Cruising for a bruising. The U.S. Defense Department is facing a gap in cruise missile defense, according to a new report from the Center for Strategic and International Studies (CSIS) that calls on the United States to establish a 360-degree air defense perimeter, backstopped by cellphone-like radar towers, that will cost around $33 billion over two decades.

“The current system of command and control, though staffed by highly dedicated U.S. and Canadian military personnel, employs 1990s-era technology and uses 1960s-era decision processes,” the CSIS authors wrote in their report. “Besides a near complete lack of mission integration, there are almost no purpose-built defenses against low-altitude cruise missile threats.”

Sa-hel no. French officials plan to travel to Mali on Friday to come up with a new strategy for the Sahel region as 2,400 troops in the country are set to exit by the end of summer.

The initial plan is to create a new regional hub for Africa operations in Niger, with about 1,000 troops, with another 300 to 400 dispatched for special operations in the border regions and up to another 1,000 troops in Chad. But French troops will need to figure out how to clamp down on the terrorist threat emanating from Mali, which is an epicenter of regional violence.

Not so sweet F-16. Democrats on Capitol Hill are standing in the way of President Joe Biden’s plans to sell F-16 fighter jets to Turkey, a consolation prize for the NATO ally after Ankara’s purchase of the Russian S-400 air defense system forced the United States to boot it from the F-35 program.

The House plans to vote this week on a new measure that would restrict Biden’s ability to sell the F-16 fighter jets to Turkey, owing to Ankara’s increasing authoritarianism and violations of sovereignty into Kurdish territory in Syria. 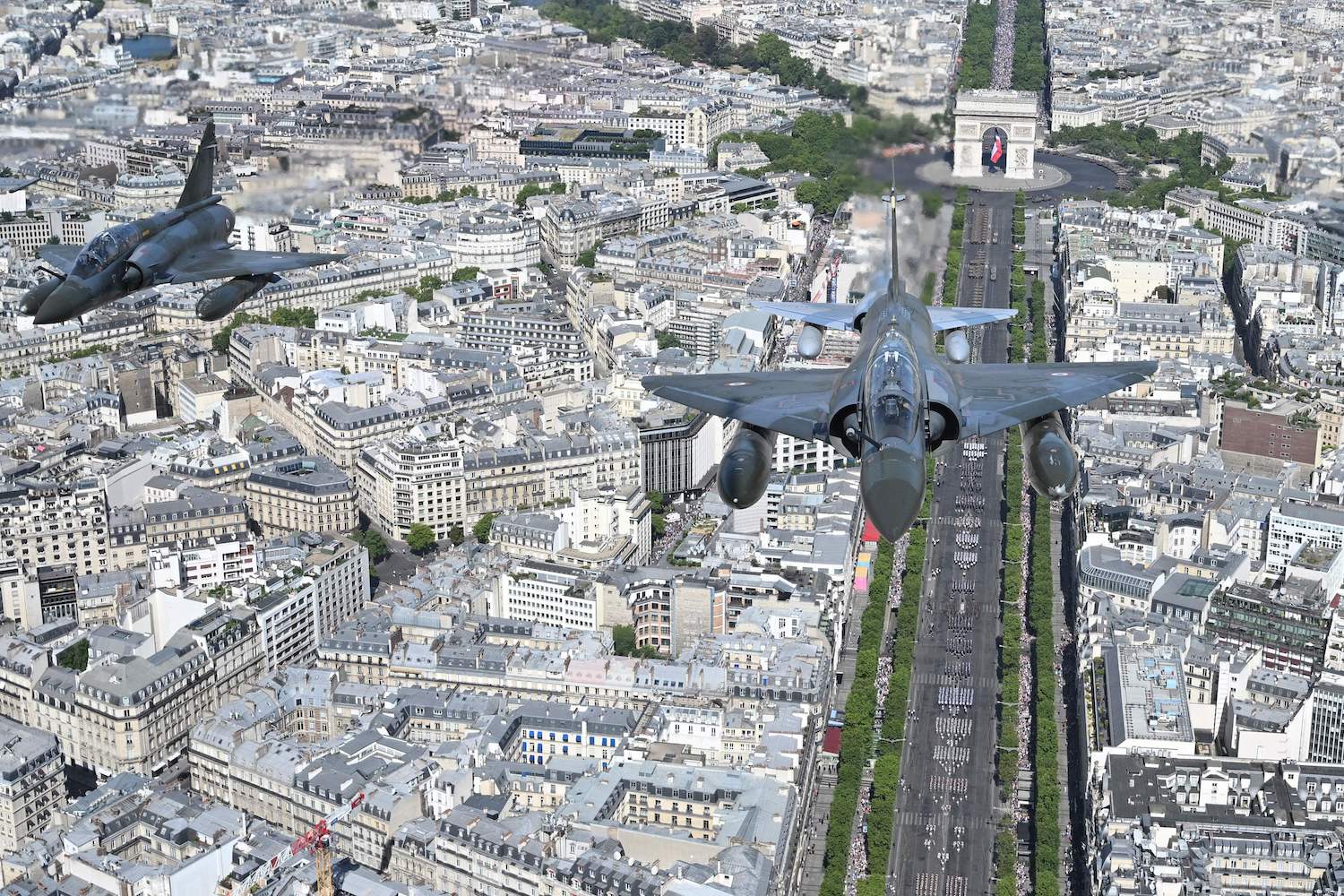 A fighter jet flies over a large boulevard.

Mirage 2000 fighter jets fly over the Champs-Élysées during the Bastille Day military parade in Paris on July 14.Christophe Simon/AFP via Getty Images

July 19: The vice chiefs of all the branches of the U.S. armed services testify before the House Armed Services Committee on the military’s readiness program.

“[G]iven Russian actions, I have shifted from being against their admittance to NATO to neutral on the question, and will as a consequence vote ‘present.’”

—U.S. Sen. Rand Paul, long a skeptic of NATO expansion, explaining in an op-ed for the American Conservative why he won’t be voting against U.S. approval of Finland and Sweden joining NATO

No spring breakers in Crimea. The puppet authorities in Russian-occupied Crimea have conceded that their big tourism season this year has failed, per Ukrainian news outlet Ukrainska Pravda. Hmm, wonder why?

Meme war. Ukraine is celebrating the arrival of U.S.-provided High Mobility Artillery Rocket Systems (HIMARS for short) with, what else? Memes. This one features a group of Japanese Shiba Inu dogs donning military fatigues watching the blasts set to the operatic tenor notes of Luciano Pavarotti.

NEW FOR SUBSCRIBERS: Want to read more on this topic or region? Click + to receive email alerts when new stories are published on Military, East Asia, South Korea

The Urgent Case for a Digital Dollar