No Accountability on Afghanistan a Year Later

As blame games swirl in Washington, will anyone be held to account?

Welcome back to Foreign Policy’s SitRep! Here’s what’s on tap for the day: accountability for the 20-year disaster in Afghanistan, Afghan special forces abandoned by U.S. were forced to flee to Iran, and updates on the war in Ukraine.

The Afghanistan Disaster Is Still Missing One Thing: Accountability

Welcome back to Foreign Policy’s SitRep! Here’s what’s on tap for the day: accountability for the 20-year disaster in Afghanistan, Afghan special forces abandoned by U.S. were forced to flee to Iran, and updates on the war in Ukraine.

The Afghanistan Disaster Is Still Missing One Thing: Accountability

In 1995, former U.S. Defense Secretary Robert McNamara published a memoir lamenting his role in crafting the U.S. war in Vietnam as a “tragic error.”

“I think we owe an explanation to future generations of what happened and how to avoid that in the future,” he said at the time.

A year after the disastrous U.S. withdrawal from Afghanistan, there’s already a surge in op-eds, studies, and retrospectives on what precisely led to the next great disaster in U.S. foreign policy, with Vietnam and Afghanistan often being uttered in the same breath.

With that come renewed calls for studies to prevent another Afghanistan war in the future. The U.S. Army conducted its own investigation into what went wrong during the chaotic final withdrawal from Afghanistan. The top Republican on the House Foreign Affairs Committee, Michael McCaul, released a massive report on the matter on Wednesday. The State Department is conducting its own retrospective review of its role, as is the government’s watchdog on Afghanistan, the Special Inspector General for Afghanistan Reconstruction (SIGAR).

Biden blamed the former Trump administration, saying the current administration inherited a broken Afghanistan policy. Former Trump officials blamed Biden, saying the withdrawal happened on his watch. All the while, it’s the Afghan people who are suffering the most under a calamitous humanitarian situation that borders on famine.

Through it all, none of the decision-makers in Washington, past or current, has been held to account, let alone fired, for what is arguably one of the most catastrophic episodes in modern U.S. foreign policy, alongside the Iraq War and the Vietnam War. Does all this end up being a futile exercise in finding scapegoats, or does it simply point to the moral hazard built into the system of U.S. foreign policy? It depends on whom you ask.

Perhaps because everyone—successive administrations, Congress, the military, diplomats—is at fault, this means no one will end up shouldering all the blame. The failure is “so general that there was no point in seeking a scapegoat,” James Dobbins, a former top U.S. diplomat, told Vox’s Jonathan Guyer. “Is that enough culprits for you?”

The jury’s still out. Still, some soul-searching is going on around Washington, and it’s hard to draw all the final conclusions for the history books before all these studies and investigations are over

“I think Congress, the State Department, the [Defense Department], the intelligence community, we all bear responsibility for a failed foreign policy here,” McCaul told us in an interview shortly before his report’s release. He said he isn’t done with his investigation into Afghanistan, and if Republicans take the House in the upcoming midterm elections, he plans to hold more hearings and compel administration officials to testify before Congress, through subpoenas if necessary.

“We need to have open hearings, not just classified hearings, before the American people,” he said, adding it’s all with a goal of ensuring “that this never happens again.” Back in 1995, McNamara had the same goal.

Molly Montgomery, a Biden appointee who served as deputy assistant secretary of state for Europe, has left her post.

Let’s talk. The United States and Taiwan said this week that the two are set to begin formal trade negotiations in the fall, a potential sign of U.S. support for the island after the drama surrounding House Speaker Nancy Pelosi’s visit to Taipei and ensuing major Chinese military exercises. The talks are set to cover nearly a dozen areas, including small and medium-size businesses and the environment.

No deal. Russia is not planning on complying with U.N.-led calls to demilitarize the area around the occupied Zaporizhzhia nuclear power plant, Europe’s largest, with a Russian Defense Ministry spokesman calling plans to do so “unacceptable” after Russia and Ukraine traded blame this month over shelling incidents that raised questions about the area’s security.

Russian Defense Ministry spokesman Igor Konashenkov accused Ukraine of planning a “provocation” near the plant to coincide with U.N. Secretary-General Antonio Guterres’s planned visit to Ukraine on Friday. Ukraine has alleged that Russia has shelled the plant.

Run for your life. As many as 3,000 members of Afghanistan’s security forces were forced to flee to Iran last year after Afghanistan’s fall to the Taliban, according to a new report from the House Foreign Affairs Committee’s Republican minority. Now, McCaul, the panel’s top Republican, is worried that elite Afghan commandos schooled in American tactics and training could share U.S. secrets with Iran, a top adversary. 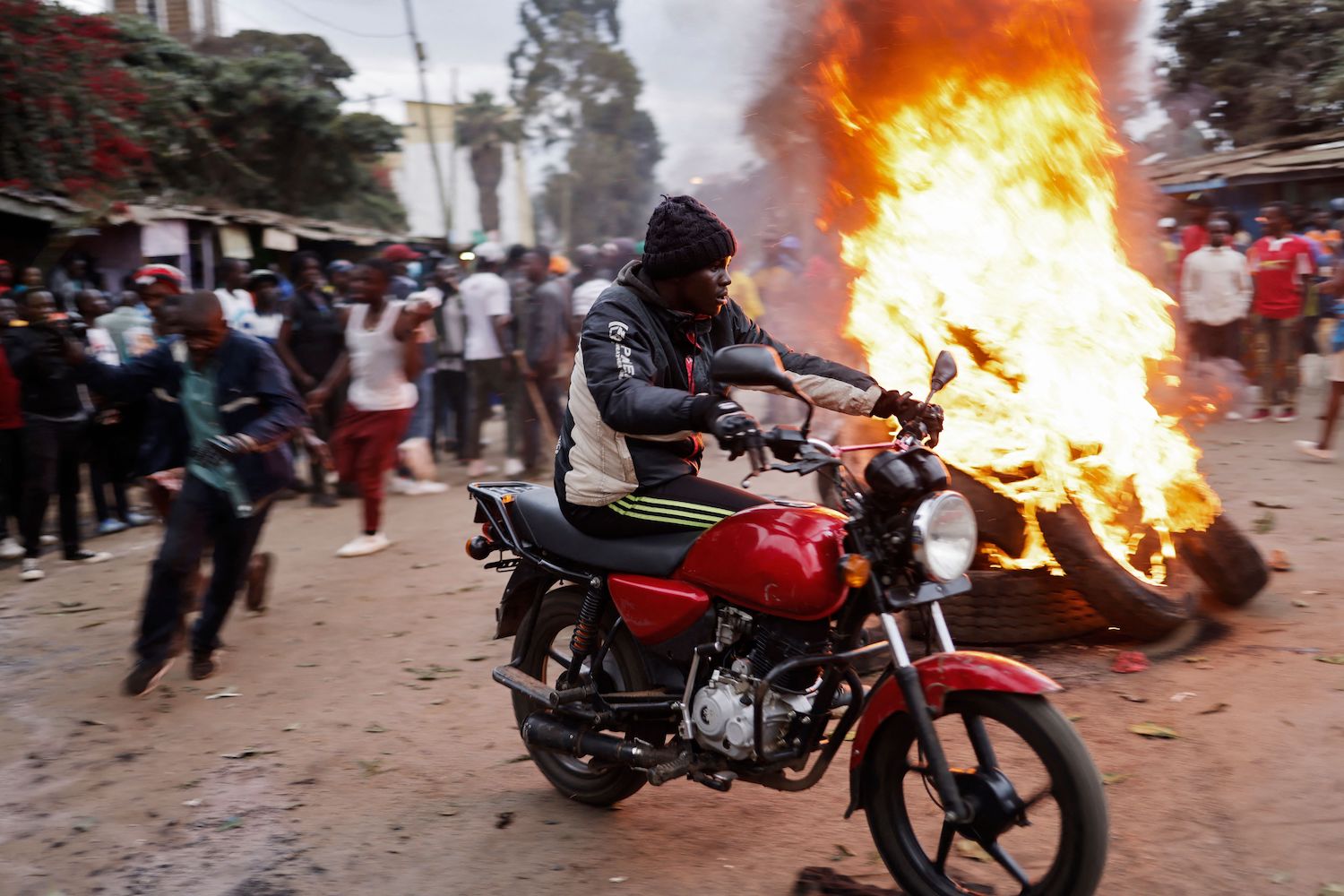 A person rides a motorcycle in a crowd past burning tires.

A man rides his motorcycle past supporters of Kenyan presidential candidate Raila Odinga amid burning tires in the Kibera area of Nairobi, after William Ruto was announced as Kenya’s president-elect.Marco Longari/AFP via Getty Images

The U.S. withdrawal from Afghanistan left the country’s diplomats, most of them loyal to the fallen government, to fend for themselves at overseas embassies against the Taliban’s pressure. Jack and Robbie wrote a feature in January that looked at the constellation of Afghanistan’s 65 embassies and all the Afghan diplomats who found themselves suddenly marooned abroad without a country to go back to.

Friday, Aug. 19: Hadi Matar is set to be arraigned in a New York court for the attempted murder of writer Salman Rushdie last week.

“I was embarrassed at the low price—I would’ve thought it would’ve been higher.”

Ruling party. Finnish Prime Minister Sanna Marin is in hot water again after videos of her partying with friends leaked on the internet. This must be what happens in countries whose elected leaders are under the age of 70.

You’re the bomb. Why buy a Hallmark card for your friends and loved ones when you can put their names on a Ukrainian bomb, missile, or artillery shell? The Ukrainian military has kicked off a crowdsourcing effort that charges U.S. and European customers many hundreds of dollars to get their name or message on the side of a Ukrainian explosive.

Some keepers: “Hello from Texas” and “Not for use on Malaysian Airlines,” referring to the deadly 2014 downing of a commercial airliner by pro-Russia separatists. Ukrainians have also recently used crowdfunding money to purchase a satellite for the military.

You are commenting as . Change your username | Log out
Tag: United States