The biggest U.S. arms package yet is a sign that policymakers think the war isn’t ending anytime soon.

By Jack Detsch, a Pentagon and national security reporter at Foreign Policy.

Here’s what’s on tap for the day: The United States starts to play the long game in Ukraine, more U.S. lawmakers arrive in Taiwan, and extreme weather batters Southeast Asia.

Here’s what’s on tap for the day: The United States starts to play the long game in Ukraine, more U.S. lawmakers arrive in Taiwan, and extreme weather batters Southeast Asia.

The United States Looks to Build “Enduring Strength” in Ukraine

If the record-breaking $3 billion military aid package announced by the Biden administration on Wednesday to mark Ukraine’s Independence Day is any indication, U.S. support for Kyiv against Russia’s six-month-old full-scale invasion has entered a new phase: long-term planning.

In fact, the weapons deliveries—which will include six Norwegian-made air defense systems, nearly 250,000 rounds of 155mm artillery ammunition, and novel so-called Vampire systems that can shoot down Russian drones—will have to be contracted and provided from U.S. and international defense companies, meaning that they won’t be ready for months.

“This package is about building enduring strength for Ukraine as it continues to defend its sovereignty in the face of Russian aggression,” Colin Kahl, U.S. undersecretary of defense for policy, told reporters at a Defense Department briefing on Thursday. “[Russian President] Vladimir Putin seems to believe that Russia can win the long game—outlasting the Ukrainians in their will to fight and the international community’s will to continue to support Ukraine.”

Wednesday’s announced aid, Kahl said, “is a tangible demonstration that this is yet another Russian miscalculation.”

The U.S. Defense Department has already begun to spin up new groups to work on the long-term fight, as U.S. officials have indicated that they’re looking at upgrading Ukraine to more NATO-level systems, including artillery and fighter jets, as stocks of Soviet-era supplies in the West have run short. U.S. Defense Secretary Lloyd Austin has tasked his office to work with the Joint Chiefs of Staff and U.S. European Command to outline Ukraine’s future military forces. British Prime Minister Boris Johnson, who traveled to Kyiv, Ukraine’s capital, for the country’s Independence Day despite warnings of missile strikes, announced that Britain would provide around $64 million in new weapons, including surveillance drones and missile systems.

But Russia is also making moves to try to expand its military forces for the fight, with Putin on Thursday signing a decree to increase Russia’s armed forces from 1.9 million to 2.04 million people, expanding the Kremlin’s military footprint by 137,000 troops by early next year without engaging in a politically costly mobilization. On Wednesday, Russia’s military struck a railway station at the eastern Donbas city of Chaplyne, saying they were trying to cut off supplies to Ukrainian forces. (Ukrainian officials said 25 civilians died in the strike, including at least two children.)

Yet to play the long game, U.S. President Joe Biden’s team will have to learn to play a shorter political game on Capitol Hill. The money from Biden’s $20 billion arms package signed in May is dwindling, and the U.S. administration will soon have to go back to Congress to ask for more.

Biden has tapped two new ambassador picks: Arthur Brown to be his envoy to Ecuador and Karen Sasahara to be the U.S. ambassador to Kuwait.

Anthony Fauci, Biden’s chief medical advisor and director of the National Institute of Allergy and Infectious Diseases, announced on Monday that he will step down from government service in December.

The FBI has named Robert Wells the assistant director of the agency’s counterterrorism division.

Tess McEnery has been tapped as the new executive director for the Project on Middle East Democracy, starting in September.

Friends of Taiwan. More U.S. lawmakers are set to arrive in Taiwan on Thursday night, according to reports, the third visit to the island this month by members of Congress after House Speaker Nancy Pelosi’s trip led to more than a week of aggressive Chinese military exercises. Sen. Marsha Blackburn, a Republican, is reportedly set for a three-day visit, and Taiwan’s official Central News Agency reported that her group would meet with Taiwanese President Tsai Ing-wen on Friday.

Extreme weather. On Tuesday, a severe tropical storm battered the Philippines, forcing classes to shutter on the first day that they had reopened after extended closures for the COVID-19 pandemic. FP’s Mary Yang has the disaster tourism postcard of the region, where the storms are just the latest headache in a spate of regional bad weather patterns in Asia, which appear to be getting worse with climate change. China’s Sichuan province has faced hotter temperatures and declining rainfall over the summer, causing a major drought, while serious flooding in Pakistan since mid-June has killed more than 900 people.

Disconnect. Ukraine’s Zaporizhzhia nuclear plant—Europe’s largest such facility, which is currently in Russian hands—was disconnected from the Ukrainian power grid on Thursday, as intensifying fighting around the plant and an uptick in shelling incidents have sparked fears of a possible nuclear meltdown. Ukrainian officials have warned in recent days that Russia planned to disconnect the plant’s remaining nuclear reactors in an effort to divert energy to the Russian grid; Ukraine’s national energy company, Energoatom, said in a statement today that nearby fires led to the move. Although the plant has been functioning normally, officials fear that tampering with the electricity supply could affect the cooling systems that operate the reactors. 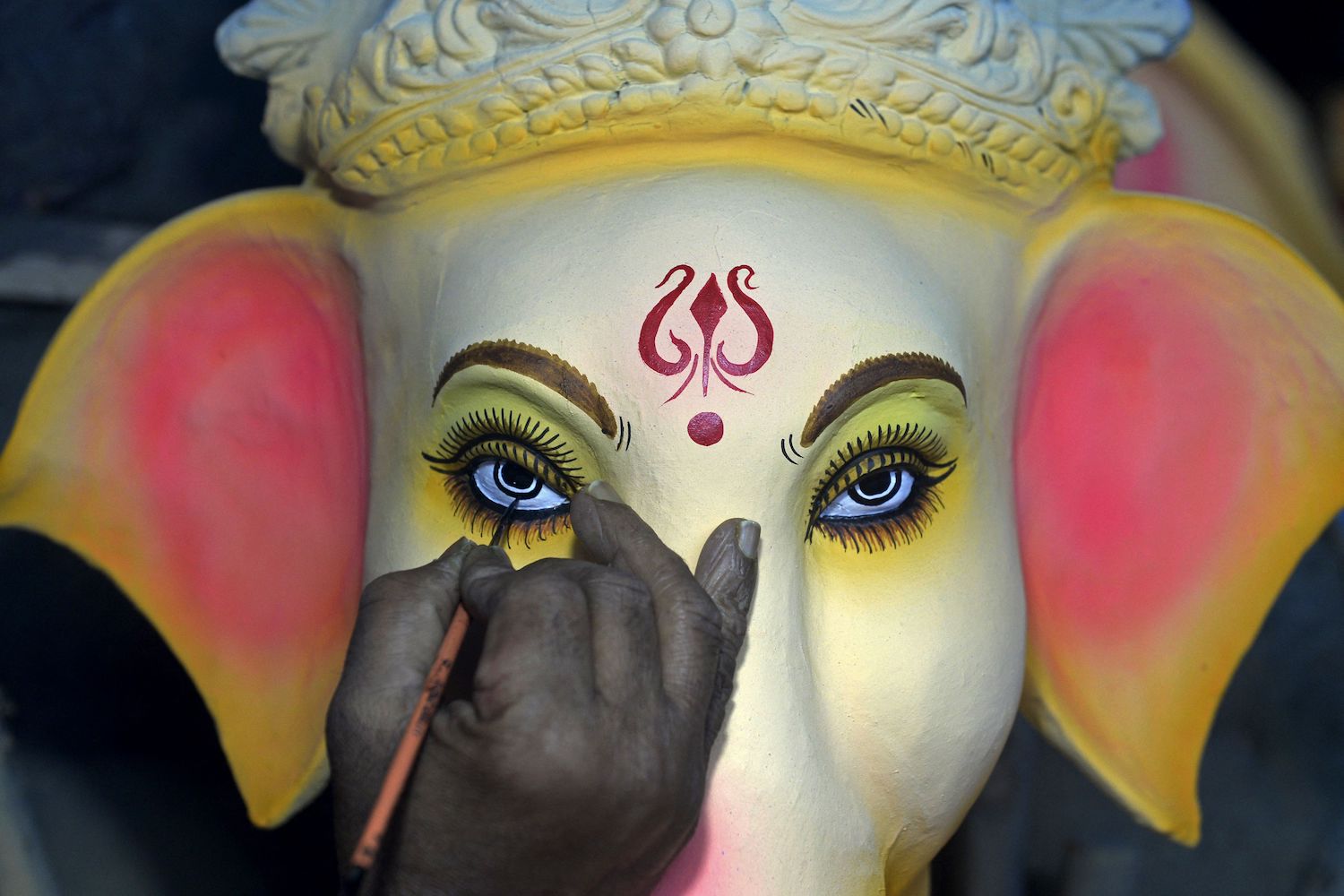 An artisan gives final touches to an ecofriendly idol of the Hindu god Ganesha at a workshop ahead of the Ganesh Chaturthi festival on the outskirts of Hyderabad, India, on Aug. 22.

An artisan gives final touches to an ecofriendly idol of the Hindu god Ganesha at a workshop ahead of the Ganesh Chaturthi festival on the outskirts of Hyderabad, India, on Aug. 22. NOAH SEELAM/AFP via Getty Images

“No occupier feels safe on our land. All collaborators know that they have no future.”

Can’t lie. Congratulations to Montenegro’s Zarko Pejanovic, who won his country’s 12th annual lying down competition after relaxing on his back for 60 hours. The champion was not humble in victory. “It wasn’t difficult,” he said. “I didn’t even warm up.”

Party time. Finland’s party-going prime minister, Sanna Marin, is in hot water once again after photos emerged of two topless social media influencers kissing at her residence. Marin had registered a clean drug test after facing backlash over her party-going lifestyle after videos surfaced of the 36-year-old Finnish leader dancing with friends.

You are commenting as . Change your username | Log out
Tags: Military, Ukraine