A top lawmaker says China’s game plan is to blockade the island and stop allies from helping out.

By Jack Detsch, a Pentagon and national security reporter at Foreign Policy.

Welcome back to Foreign Policy’s SitRep! Robbie is gone for the week, and the rest of us at the FP news desk are huddled around our radios, mourning the death of Queen Elizabeth II.

Alright, here’s what’s on tap for the day: Taiwan prepares for more Chinese military pressure after scaled-up exercises last month, Xi is set to meet with Putin, and Biden has a new plan to root out kleptocrats.

Welcome back to Foreign Policy’s SitRep! Robbie is gone for the week, and the rest of us at the FP news desk are huddled around our radios, mourning the death of Queen Elizabeth II.

Alright, here’s what’s on tap for the day: Taiwan prepares for more Chinese military pressure after scaled-up exercises last month, Xi is set to meet with Putin, and Biden has a new plan to root out kleptocrats.

In case you hadn’t noticed, Chinese military aircraft are still crossing over the median line in the Taiwan Strait, more than a month after U.S. House Speaker Nancy Pelosi’s visit to the embattled island sparked concerns from Beijing that the United States was looking to overturn the long-held status quo in the region.

But if you ask some U.S. and Taiwanese officials about the still-simmering situation just a month after the historic visit, they’ll insist that the ball is in China’s court—and that Beijing is assiduously working to ramp up military tensions even as it wags a finger at the West. On Thursday, 19 Chinese aircraft crossed the median line, the unofficial territorial boundary between China and Taiwan in the strait, in what’s becoming a near-daily effort to scrub away the geographic barrier.

Chinese President Xi Jinping “tried using this opportunity to create a new normal,” Wang Ting-yu, who sits on the foreign affairs and defense committee in Taiwan’s parliament, told Foreign Policy in an interview. “He tried to erase the middle line in the Taiwan Strait. He tried to harass our airspace more closely, not only enter our ADIZ,” he added, using an acronym for Taiwan’s air defense identification zone, which Taipei uses to mark possible hostile air incursions.

The combination of air and naval exercises around Taiwan—including missiles that overflew the island—struck Wang and parliamentary colleagues as new, even as life on the island has gone on as normal since Pelosi’s visit, indicating that one of China’s military plans could be to blockade Taiwan.

Yet Wang insisted that China’s increased aggression is focused not just on Taiwan—which China could have the capability to invade by 2027, said outgoing U.S. Indo-Pacific Command chief Adm. Phil Davidson last year—but also on direct U.S. treaty allies such as Japan. During the August exercises, Wang said, Taiwanese intelligence indicated that Xi ordered missiles to be fired into Japan’s exclusive economic zone, a possible warning to U.S. allies to keep out if Beijing launches a full-scale invasion.

Still, Wang suggested that the tensions in 1996, during the second Taiwan Strait crisis, when missiles also overflew the island, were more severe because Taiwan didn’t have missile defenses commensurate with Chinese threats. That crisis caused more than 800,000 people to move away from Taiwan, sparking a real estate crisis. In contrast, Taiwan’s stock market rose more than 300 points on the first day of China’s 2022 exercises.

“We are not in panic,” Wang said. “We worry about this. We pay attention to this. But we are not scared about the situation.”

Over at the Defense Department, Biden has tapped Nickolas Guertin as the U.S. Navy’s top research, development, and acquisition official. Guertin is currently the director for operational test and evaluation at the Office of the Secretary of Defense.

Biden has also picked his congressional and public delegates for the U.N. General Assembly later this month. Sens. Patrick Leahy and Jim Risch will represent Congress at the United Nations, while lawyers S. Douglas Bunch, Carol Leslie Hamilton, and Andrew Weinstein will lead the public delegation.

Also at the U.N., Secretary-General António Guterres has tapped former Senegalese minister Abdoulaye Bathily as his envoy to the conflict in Libya.

In think tank land, Biden has nominated Roger Zakheim to join the U.S. Institute of Peace. FP contributor Emma Ashford is now a senior fellow at the Stimson Center, and Ken Roth has left his post as Human Rights Watch’s executive director after nearly 30 years, turning over the reins to Tirana Hassan as interim executive director.

Target practice. Ukraine has now struck more than 400 Russian targets with U.S.-provided Multiple Launch Rocket Systems since they were first handed over to Kyiv this summer, Gen. Mark Milley, the chairman of the U.S. Joint Chiefs of Staff, said at a press conference in Germany on Thursday. Milley said the 16 High Mobility Artillery Rocket Systems given to Ukraine by the Pentagon had contributed to “real and measurable gains” on the battlefield.

Xi’s back. Chinese President Xi Jinping is preparing for one of his first international trips since the beginning of the COVID-19 pandemic, traveling to Uzbekistan next week for a gathering of the Shanghai Cooperation Organisation, where he is expected to meet with his Russian counterpart, Vladimir Putin, among other leaders in the region. Xi and Putin have spoken twice on the phone since Russia’s full-scale invasion of Ukraine in February, and the summit could be an opportunity for the two countries to draw closer still, as China has flirted with the idea of providing military aid—such as meals ready to eat—to Russia. 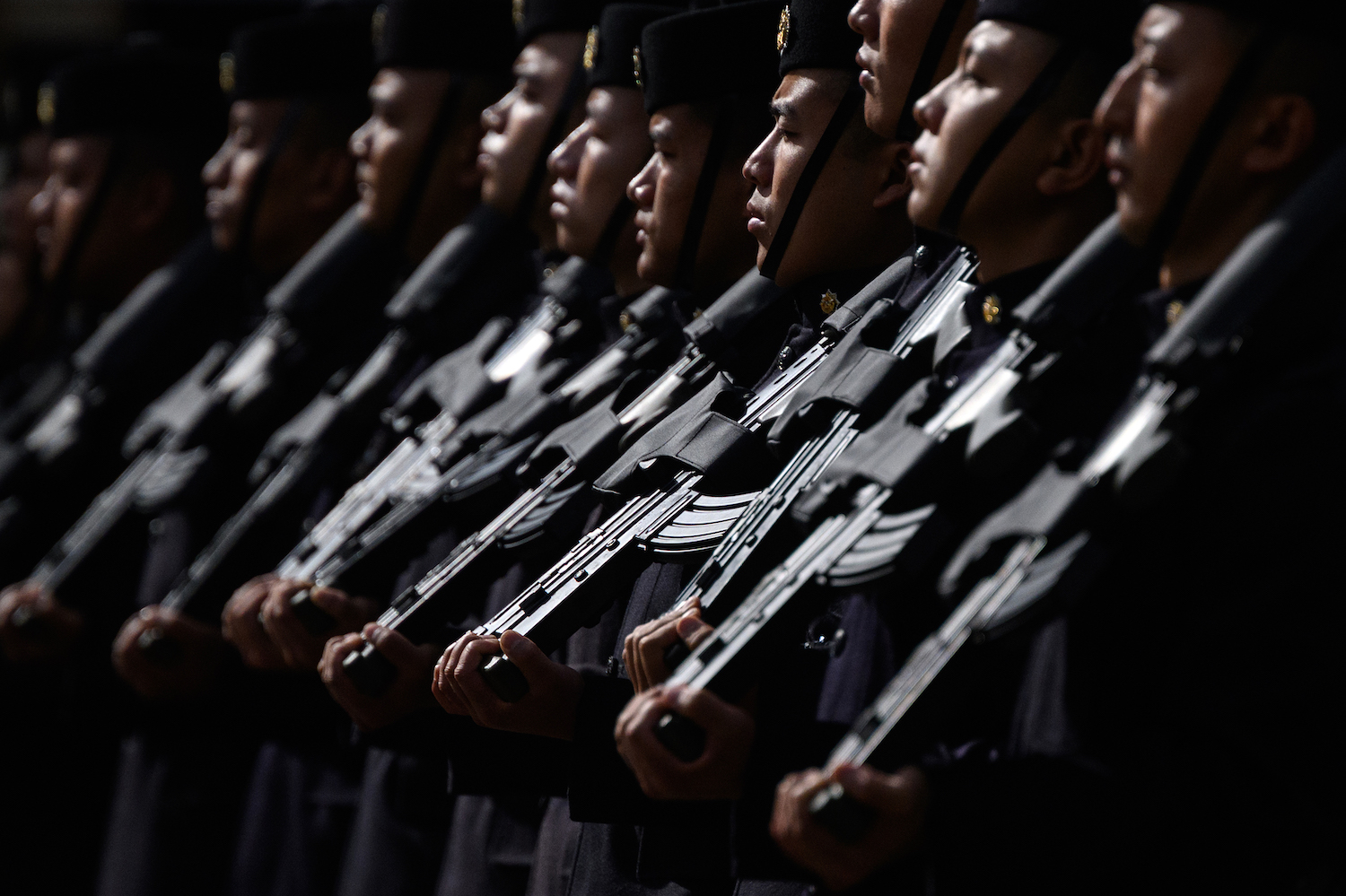 Soldiers stand side by side in dark uniforms.

Members of the 94 Squadron of the Queen’s Own Gurkha Logistic Regiment are seen during a final inspection parade at Wellington Barracks in London on Sept. 8. The inspection was to determine if the soldiers were “fit for role” as potential future Queen’s Guards.Leon Neal/Getty Images

Tuesday, Sept. 13: U.S. President Joe Biden’s nominee to be the new chief of the Space Force, Lt. Gen. B. Chance Saltzman, has his confirmation hearing before the Senate Armed Services Committee.

“Will there be any political decisions that contradict the contracts? Yes, we just won’t fulfill them. We will not supply anything at all if it contradicts our interests.”

• Why Trumpism Will Endure by Michael Hirsh

All dressed up. OK, now we’ve seen everything. Ukraine’s military has souped up one of its new Turkish Bayraktar drones with a vyshyvanka decal.

You are commenting as . Change your username | Log out
Tags: Asia, China, East Asia, Military, Taiwan

NEW FOR SUBSCRIBERS: Want to read more on this topic or region? Click + to receive email alerts when new stories are published on Military, China, East Asia, Taiwan