Welcome back to Foreign Policy’s SitRep! As an appetizer for our newsletter, please enjoy the new official song for the U.S. Space Force, unveiled for the first time this week. (FYI: We do not recommend playing the song, as it is not good.)

Welcome back to Foreign Policy’s SitRep! As an appetizer for our newsletter, please enjoy the new official song for the U.S. Space Force, unveiled for the first time this week. (FYI: We do not recommend playing the song, as it is not good.)

Who Wants to Be a Kremlinologist?

HELSINKI—Across European capitals, diplomats and defense officials are quietly quizzing each other in what’s become the highest-stakes guessing game since the end of the Cold War: What comes next for Russia?

I’ve spent the past week in the Nordic-Baltic region speaking to dozens of officials and experts, all of whom are questioning what Russian President Vladimir Putin will do next, how long he can retain power given the disastrous turns for Moscow in its war in Ukraine, and what all that means for the stability of Russia.

First, some caveats: Trying to piece together what’s going on inside the closed-off world of the Kremlin always requires guesswork. The people with real insights into what’s going on won’t go on record, and those who will don’t always know what they’re talking about. But there are some broad trends that everyone agrees on.

First, the war in Ukraine has weakened Putin’s grip on power. It doesn’t necessarily mean he will be chased from the Kremlin, and there are no obvious challengers waiting in line. Putin has proved a ruthless and wily operator at hanging on to power in the past, but we’re entering new territory here.

“What really worries me is that for the first time since the early 1990s, we can’t see what comes around the corner in Russia,” said one Finnish defense official, who spoke on condition of anonymity.

Second, Russia’s war, and this week’s call for a partial mobilization, could upend the political situation in Russia and undercut Moscow’s central authority over the rest of the country if it is mishandled.

“We face two options,” said a senior Baltic defense official, speaking on condition of anonymity to discuss internal policy deliberations. “Either Russia ramps up its repression at home and escalates its war in Ukraine, or Russia faces internal upheavals and instability if Putin can’t keep control.”

“Neither option is good for any of us in this region,” the official added.

Third, the stock of nearly every power broker around Putin has gone down since the war began as mishaps piled up on mistakes stacked upon miscalculations. But there is one exception: Yevgeny Prigozhin, a Putin confidant and oligarch who runs the notorious Wagner mercenary group. “Wagner has proven to be the only one left fielding a somewhat competent fighting force in Ukraine, and he will try and take advantage of that politically,” said another senior Finnish official, who also requested anonymity to speak candidly about dynamics inside the Russian military.

That doesn’t mean Prigozhin’s trying to consolidate power against Putin. The broad consensus among these officials is simply that it’s significant, but they don’t really know how yet. For the Baltic-Nordic region, Russia’s stability, as much as the war in Ukraine, is a cause for concern.

In other diplomatic news, Biden has tapped Roger Nyhus as his pick for U.S. ambassador to a series of Caribbean island nations: Barbados, St. Kitts and Nevis, St. Lucia, Antigua and Barbuda, Dominica, Grenada, and St. Vincent and the Grenadines.

Prisoner swap. Russia and Ukraine struck a deal on Wednesday to exchange nearly 300 prisoners. Ukraine will get back 215 Ukrainian and foreign fighters, including the surviving defenders of Mariupol’s besieged Azovstal steel plant, while 55 Russians and pro-Russian Ukrainians will return to Moscow, including the pro-Kremlin opposition politician Viktor Medvedchuk, who faced treason charges in Kyiv. Five of the Ukrainian commanders of the Azovstal fighters are to remain in Turkey until the end of the war under the terms of the deal.

Industrial espionage. China recruited at least 154 Chinese scientists from the top U.S. national security laboratory to work on high-tech military gadgets over the past two decades, according to a private intelligence report, marking a systematic effort to steal American industrial secrets. Strider Technologies, which conducted the research, said that China worked to place scientists at Los Alamos National Laboratory in New Mexico, and it sometimes paid up to $1 million to recruit workers at the laboratory to work in Beijing, helping advance hypersonic and submarine programs, among other systems. 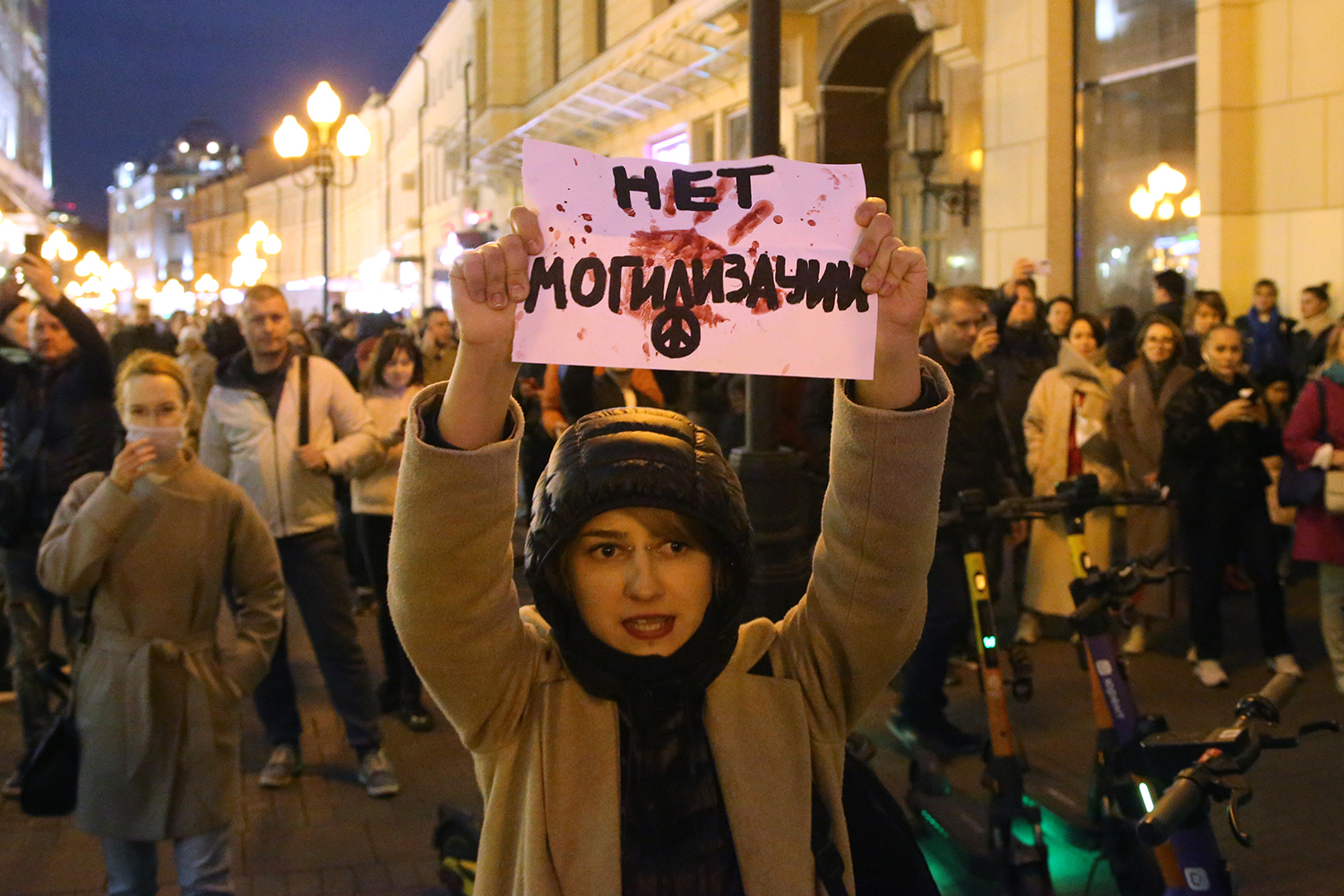 An activist participates in an unsanctioned protest in Moscow on Sept. 21.Contributor/Getty Images

“And so we walked away. The interview didn’t happen. As protests continue in Iran and people are being killed, it would have been an important moment to speak with President Raisi.” —CNN journalist Christiane Amanpour, who called off an interview with Iran’s hard-line President Ebrahim Raisi last night after Iranian officials asked her to wear a headscarf—in New York, where it is not traditionally required—as a last-minute condition.

• Ukraine Put Putin in the Corner. Here’s What May Happen Next. by Amy MacKinnon, Robbie Gramer, and Jack Detsch

• Kazakhstan is Breaking Out of Russia’s Grip by Temur Umarov

• What Russia’s Elites Think of Putin Now by Tatiana Stanovaya

What Lionel Messi Reveals About Geopolitics

Qatar World Cup: Switzerland vs. Serbia Match Is Really All About Kosovo