A weekly digest of national security, defense, and cybersecurity news from reporters Jack Detsch and Robbie Gramer. Look out for special editions of this newsletter Feb. 16-19 as SitRep heads to Germany to give you behind-the-scenes looks and breaking news from The Munich Security Conference, one of the most consequential gatherings of world leaders.
Sign Up
✓ Signed Up Unsubscribe

U.S. Gets Hypersonics Back on Track

Welcome back to Foreign Policy’s SitRep! We’re back with another rundown of this week’s top national security news.

P.S. In case you missed it, the “cyberspooks” over at the National Security Agency are getting into the meme game—or at least trying to.

Alright, here’s what’s on tap for the day: The Pentagon tries to cut into China’s edge on hypersonic weapons, the Biden administration (finally) releases its National Defense Strategy, and Russia tries to recruit U.S.-trained Afghan commandos for Ukraine.

Welcome back to Foreign Policy’s SitRep! We’re back with another rundown of this week’s top national security news.

P.S. In case you missed it, the “cyberspooks” over at the National Security Agency are getting into the meme game—or at least trying to.

Alright, here’s what’s on tap for the day: The Pentagon tries to cut into China’s edge on hypersonic weapons, the Biden administration (finally) releases its National Defense Strategy, and Russia tries to recruit U.S.-trained Afghan commandos for Ukraine.

It was a rude awakening for the Defense Department and Intelligence Community, something that Joint Chiefs of Staff Chairman Gen. Mark Milley said was “very close” to a “Sputnik moment” for a new era of the global arms race. The United States has scrambled to catch up ever since.

Testing, testing. Now U.S. defense officials are breathing a slightly less anxious and temporary sigh of relief. The Pentagon said it conducted a successful test launch of a rocket on Wednesday, which tested about a dozen hypersonic weapons experiments, and has another test launch scheduled for Thursday. The tests are an important stepping stone for the U.S. military to develop its own hypersonics weapons programs to try to catch up to China.

The U.S. Army and Navy are both working to develop hypersonic weapons programs through the Long-Range Hypersonic Weapon (LRHW) and Conventional Prompt Strike (CPS) programs.

A new headache in the deterrence game. Unlike your old-time run-of-the-mill missile, hypersonic weapons can travel at speeds of up to Mach 5 (nearly 4,000 miles per hour) and maneuver in midair. The technology for hypersonic weapons has been around since the 1960s.

But what makes China’s hypersonic missile tests last year so worrying for Washington was the combination of a few different technologies: launching a missile into low orbit to go around the world and, from there, having that missile drop a hypersonic glide vehicle that can zig and zag at super high speeds around any possible missile defense countermeasures to drop its (possibly nuclear) payloads. So in short, all bad news for the enemy on the receiving end of that hypersonic glide vehicle.

The Pentagon’s fiscal year 2023 budget request asks for $4.7 billion for research on hypersonic weapons, a boost from $3.8 billion in fiscal year 2022. At this point, the Pentagon is still in a “let’s test stuff and see what happens” mode, and it hasn’t yet formally made a decision to acquire hypersonic weapons, as a newly updated Congressional Research Service report notes.

Jeremy Konyndyk has been tapped as the president of Refugees International. He previously served as executive director of the COVID-19 Task Force at the U.S. Agency for International Development.

Time for some strategery. The question of when the U.S. National Defense Strategy would drop has become kind of a running joke among defense reporters for months now. But nearly two years into his administration, U.S. President Joe Biden’s opportunity to fix the Pentagon’s North Star is here, and he’s using it to focus on, you guessed it, China.

Turning from former U.S. President Donald Trump’s 2018 strategy, China is now the primary threat to U.S. national interests instead of a dual focus on China and Russia. But the release of the 80-page public strategy is still bound to create some headaches: The Biden administration already briefed Congress on the classified version in February.

Putin goes commando. Russian President Vladimir Putin has started recruiting former U.S.-trained Afghan commandos that were abandoned by the United States and its allies during the withdrawal of troops from Afghanistan last year.

FP columnist Lynne O’Donnell reports that some former light infantry troops—who have faced retribution from the Taliban and have fled to Iran—have been receiving messages from Russian recruiters desperate to bring more manpower to bear in Ukraine, and sources believe that the infamous Russian paramilitary Wagner Group is behind the effort.

No Belgian waffling. Chinese diplomats were incensed by an interview the Belgian foreign minister, Hadja Lahbib, gave to a newspaper about security risks from China’s involvement in Europe’s port and infrastructures. So, in a clumsy and heavy-handed “wolf warrior” misstep, a Chinese diplomat privately demanded that she “retract” the interview and added a thinly veiled threat about Beijing carrying out economic reprisals against Belgium, according to a leaked diplomatic cable obtained by Politico.

She didn’t waffle on the interview, however, despite the rebuke and veiled threat. But the whole incident provides a glimpse into how Chinese diplomats may be inadvertently doing their darndest to alienate Europe. 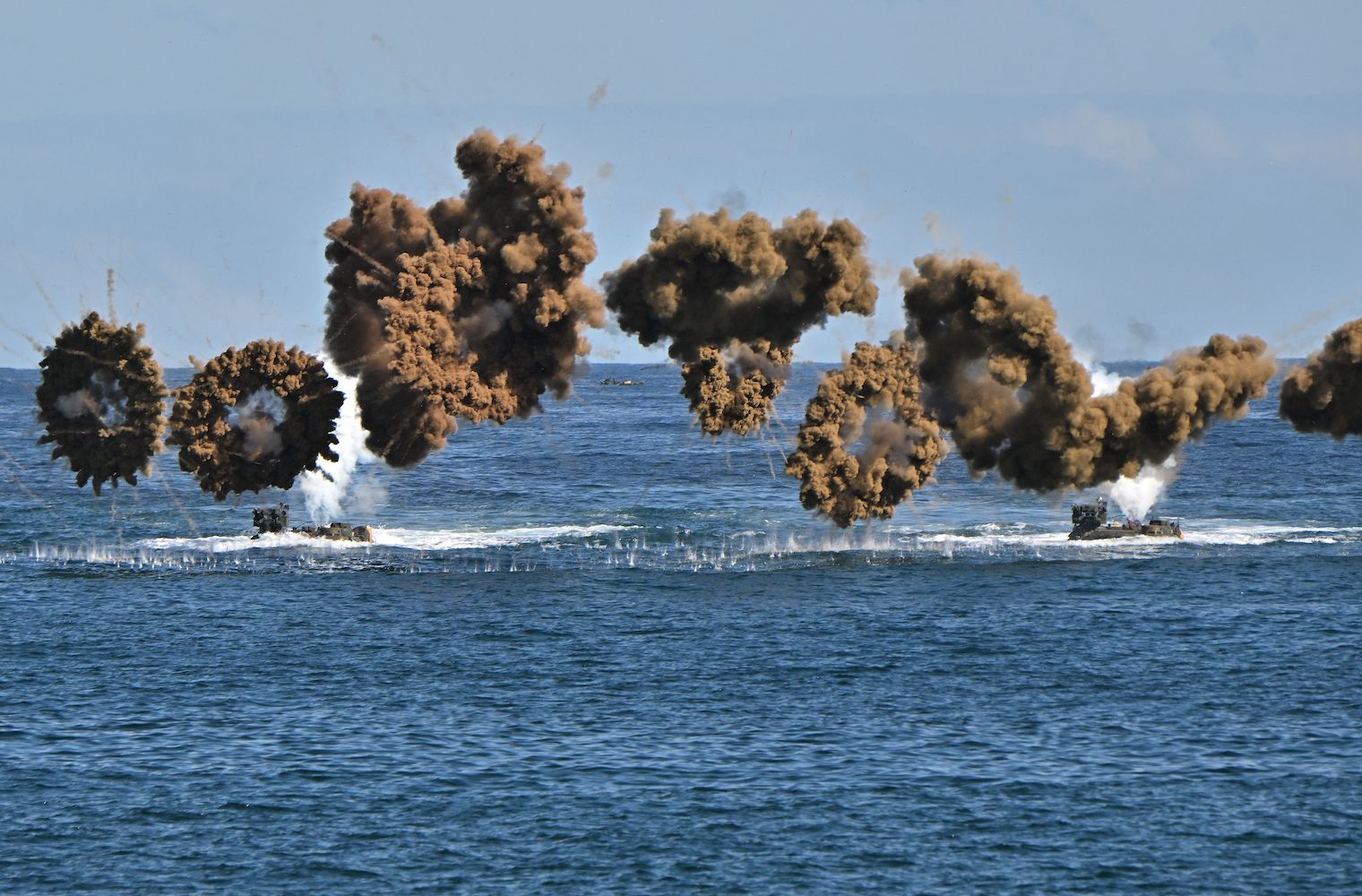 Brown smoke shells are pictured above a blue body of water.

“Maybe nuclear blackmail wasn’t as loud in the past as it is now, but it has always belonged to the Russian political arsenal.”

• What the Hell Just Happened to Hu Jintao? by James Palmer

Watch out, Geneva. Phoenix is coming for ya. Arizona Republican Rep. Paul Gosar sent a letter to Putin and his Ukrainian counterpart, Volodymyr Zelensky, inviting them to Phoenix for peace talks. “If there is not one leader in our politics or our military who will attempt to end this war without unthinkable global death and destruction, then I must,” Gosar said in a post on the Trump-linked Truth Social media site.

NEW FOR SUBSCRIBERS: Want to read more on this topic or region? Click + to receive email alerts when new stories are published on Military, United States, North America