Biden Seeks to Catch Up With Beijing in Africa

If showing up is half the battle, China may still have the advantage.

Welcome back to Foreign Policy’s SitRep! Robbie here, covering the beat with Christina Lu while Jack is off on some well-deserved R&R.

Here’s what’s on tap for the day: Takeaways from Biden’s big Africa summit in Washington, Patriot missile defenses going to Ukraine, and a defense tech start-up stumbles out of the gate.

Welcome back to Foreign Policy’s SitRep! Robbie here, covering the beat with Christina Lu while Jack is off on some well-deserved R&R.

Here’s what’s on tap for the day: Takeaways from Biden’s big Africa summit in Washington, Patriot missile defenses going to Ukraine, and a defense tech start-up stumbles out of the gate.

U.S. President Joe Biden invited around 50 African leaders to Washington this week as part of a broader campaign to play catch-up with its rivals China and Russia, who are vying for more influence on the continent.

“The United States is all in on Africa’s future,” he said on Wednesday. The U.S.-Africa Leaders Summit came with a slew of announcements meant to show African leaders that Biden is turning the page on U.S.-Africa engagement, with new economic investment plans to expand business ties and diplomatic initiatives to empower African countries on the world stage.

The Biden team carefully pirouetted around China. The country got no mention in the president’s speech at the summit or in its agenda. But U.S.-China competition was still bubbling just beneath the surface. By many measures, the United States is still lagging behind China in engagement with Africa, and it’s not something that the first U.S.-Africa Leaders Summit in eight years can make up for on its own. If showing up is half the battle, Beijing has a leg up on Washington.

“China-Africa relations are the bedrock of China’s foreign policy,” China’s ambassador to Washington, Qin Gang, said at a Semafor conference on the sidelines of the official summit this week. He noted that for the past two decades, China’s foreign minister has made a tradition of visiting African countries at the beginning of each year—a tradition the United States can’t claim to compete with.

China’s investment in Africa is about four times that of the United States. The Biden team headlined the summit with an announcement that the United States would commit $55 billion to Africa over the next three years, but a lot of those funds appear to come from projects that have already been announced, including programs on health security, climate change, and trade.

Biden has yet to visit sub-Saharan Africa as president but plans to make a multi-country visit to the continent next year. (The White House has yet to announce the countries he will visit.) Unlike his Chinese counterpart, however, Biden didn’t schedule formal bilateral meetings with each African leader during the summit this week, something that could rankle some of the leaders who flew all the way across the Atlantic for a rare chance of a meeting and photo-op with the U.S. president.

Still, the administration is making efforts to show that its diplomatic engagement in Africa goes beyond the talking points and photo-ops. Biden will formally lobby to add the African Union, the bloc that represents the continent’s 54 countries, to the G-20, and has expressed support for Africa’s bid to have a permanent seat on the U.N. Security Council.

The positive messages that the Biden administration was trying to put forward for the summit were somewhat overshadowed by who made the invite list, namely a lot of autocrats and leaders of governments who stand accused of crimes against humanity.

Shamila Chaudhary was appointed Democratic co-chair of the Afghanistan War Commission, which will review U.S. engagement in Afghanistan from 2001 to 2021.

Andrew Metrick has joined the Center for a New American Security think tank as a defense fellow.

Patriot games. Washington is making its final preparations to send Ukraine the Patriot missile system, one of the United States’ most sophisticated air defense systems, CNN first reported this week. Both Defense Secretary Lloyd Austin and Biden are expected to approve the shipment, which would answer months of Ukrainian appeals for more advanced air defenses. Russia was infuriated by reports of the transfer, and its officials have warned of “unpredictable consequences.”

“We have been very clear that the United States will continue to prioritize sending air defense systems to Ukraine to help our Ukrainian partners defend themselves from the brutal Russian aggression that we’ve seen for the better part of a year now,” State Department spokesman Ned Price said earlier this week.

Revenge of the tech bros. A defense tech start-up that received all the buzz and backing from top national security and Silicon Valley denizens, Rebellion Defense, is falling well short of its promises to disrupt the way the Pentagon manages cutting-edge technologies, as Vox reports in a new deep dive.

“Rebellion is like the Fyre Festival led by Jar Jar Binks,” as one former employee told Vox, referring to the disastrous music festival and a not-so-popular character in Star Wars. A spokesperson for Rebellion pushed back on the criticisms outlined in the article, all of which you can read here.

Frosty China-U.K. relations. China has pulled six diplomats from the United Kingdom after police asked Beijing to waive their immunity for official questioning over how a pro-democracy protester was forcibly dragged into the embassy’s property and then assaulted in October.

The incident sparked a diplomatic firestorm and fueled pressure for a forceful response within Britain. “In response to our request the Chinese government have now removed from the U.K. those officials, including the consul-general himself,” said British Foreign Secretary James Cleverly. 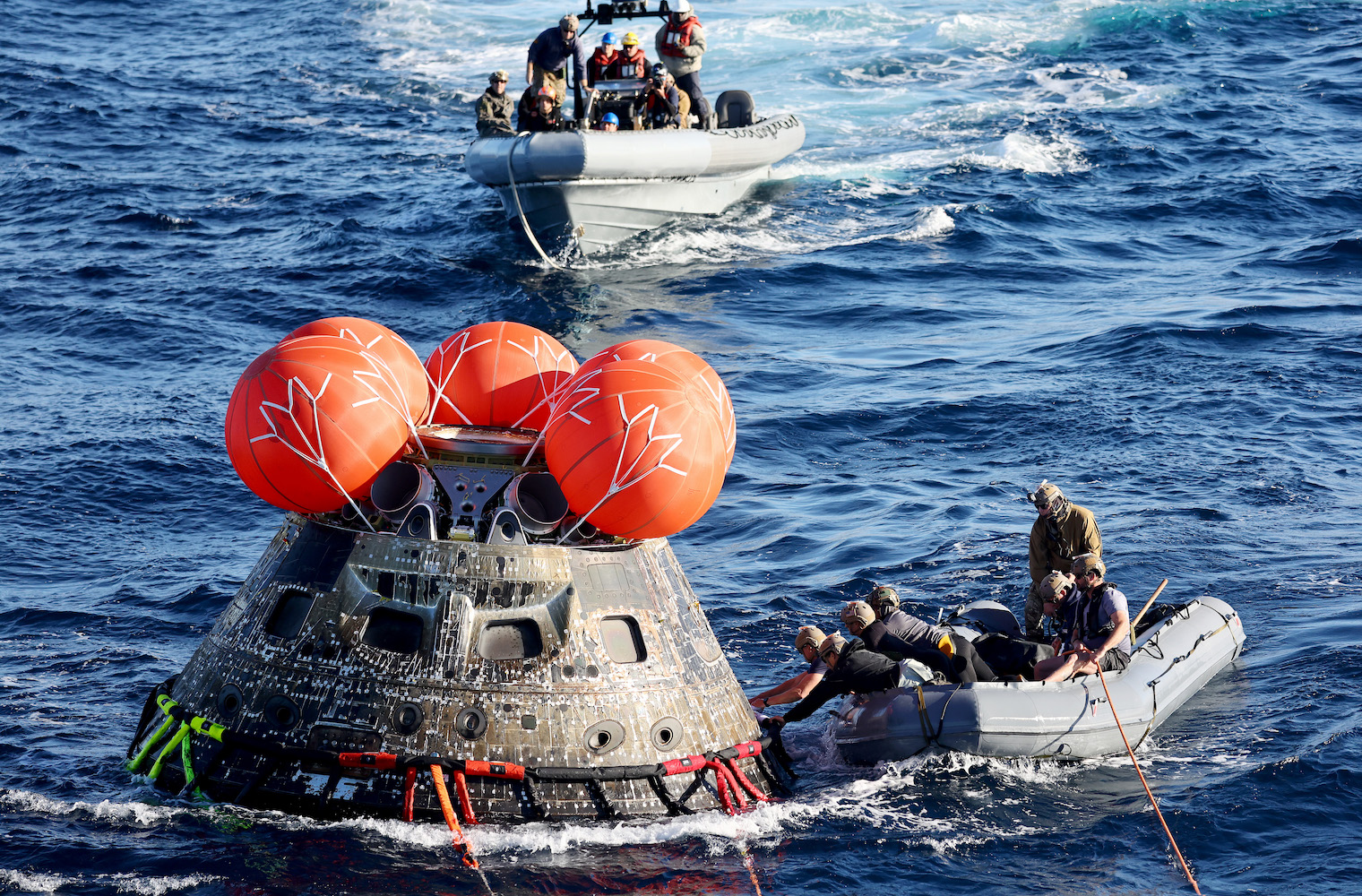 A large capsule is shown in the ocean; people on a boat are trying to reach it.

Dec. 22: European Parliament Vice President Eva Kaili is due to appear in court over the suspected Qatari corruption probe.

“I know that I can beat this enemy. But I need resources. … I get what I get, but it is less than what I need.”

—Gen. Valery Zaluzhny, head of Ukraine’s armed forces, in an interview with the Economist on the need for more Western military equipment

• Don’t Be Afraid of a Russian Collapse by Kristi Raik

A historic feat. For the first time ever, no soccer fans from the United Kingdom were arrested at the World Cup this year. Maybe it had something to do with World Cup host Qatar’s decision to ban alcohol sales inside the stadium.

You are commenting as . Change your username | Log out
Tags: Africa, North America, United States

NEW FOR SUBSCRIBERS: Want to read more on this topic or region? Click + to receive email alerts when new stories are published on United States, North America, Africa