Life stories of the politicians who changed our world in 2022.

At Foreign Policy, personality often takes a backseat to—well, you know—policy. But biography can inform the decisions made by political leaders, whether they realize it or not. In this collection of profiles from the past year, we dig deep into the backstories of some of the world’s most influential figures.

Some of them are warmongers like Taliban “rainmaker” Hassib Habibi; others are controversial firebrands like U.S. Rep. Elise Stefanik. All have, in different ways and various regions, shaped the world in 2022. Read on for insights into the makings of their politics.

1. Penny Wong Wants Australia to Be More Than a Supporting Player

At Foreign Policy, personality often takes a backseat to—well, you know—policy. But biography can inform the decisions made by political leaders, whether they realize it or not. In this collection of profiles from the past year, we dig deep into the backstories of some of the world’s most influential figures.

Some of them are warmongers like Taliban “rainmaker” Hassib Habibi; others are controversial firebrands like U.S. Rep. Elise Stefanik. All have, in different ways and various regions, shaped the world in 2022. Read on for insights into the makings of their politics.

1. Penny Wong Wants Australia to Be More Than a Supporting Player

Penny Wong is far from the first Australian foreign minister to recognize the importance of relationships with Southeast Asia. But, as she pointed out in a speech after her election this year, she is the first to make such statements as an Australian foreign minister who is from Southeast Asia. On her father’s side, Wong is the descendent of Cantonese Chinese who were recruited as agricultural laborers by the British North Borneo Company. When Wong was born in 1968, her father’s hometown in North Borneo was part of the new nation of Malaysia.

At the Pacific Islands Forum held in Fiji in July—her first overseas trip since becoming foreign minister—Wong communicated a subtle message. As journalist Margaret Simons writes, she “avoid[ed] telling the Pacific Island nations what to do,” instead suggesting “they needed to act regionally to decide matters for themselves—together as a ‘family.’” This is, Simons argues, Wong’s trademark “listen first” approach to diplomacy and politics, which she will use to navigate Australia between the United States and China—the two superpowers vying to control its fate.

Hassib Habibi carries his convictions as easily as his AK-47, journalist Ali M. Latifi writes. But when the 31-year-old deputy director of economic cooperation at the Afghan Ministry of Foreign Affairs speaks, he diverges from the stereotype of the Taliban fighter. Habibi, Latifi writes, “eschews the fire and brimstone that characterize most Taliban harangues,” and after the Taliban’s takeover last August, he’s been working to attract foreign investment to a pariah state under international sanctions and opprobrium.

Looking at his past, in which Habibi alternated between studying in Kabul and returning to the battlefields of his native Maidan Wardak province, Latifi concludes the senior diplomat is “the embodiment of the paradox of today’s Afghanistan.” He would fit in at any of the hip cafes in the capital, at least before the Taliban’s takeover, and also “speaks at length about being called to jihad and his Islamic duty to protect his nation against an infidel occupier.”

3. Elise Stefanik Is Most Likely to Succeed 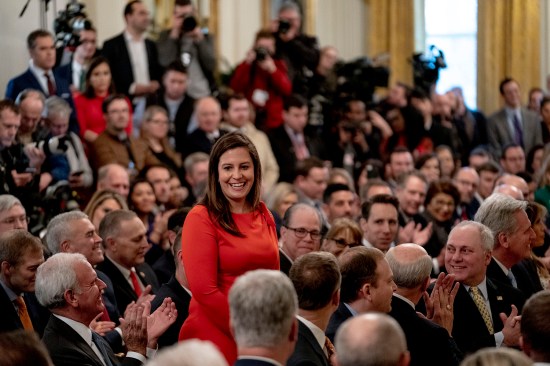 U.S. Rep. Elise Stefanik stands as President Donald Trump recognizes her for her work during the impeachment hearings at the White House in Washington on Feb. 6, 2020. Anna Moneymaker/The New York Times via Redux

In 2016, the youngest woman ever elected to Congress took the debate stage seeking reelection for her district in upstate New York. Rep. Elise Stefanik, age 32 at the time, appeared unfazed when asked about her party’s nominee for president, Donald Trump, and stated her opposition to his unfounded allegation that the forthcoming election would be rigged against him.

“That was then. This is now,” writes FP’s Amy Mackinnon a few weeks before this year’s midterm elections. Stefanik has turned into one of Trump’s most vehement supporters, voting to overturn the results of the 2020 presidential election and continuing to amplify his false claims of voting irregularities as she has ascended to become the third-ranking House Republican. Mackinnon examines Stefanik’s record as a “bellwether for the Republican Party,” mapping its transformation onto hers for clues as to how both have tacked to increasingly extreme and anti-democratic positions.

4. The Education of Pap Ndiaye

How did a quiet academic become a lightning rod in the French culture wars? Pap Ndiaye is a history professor specializing in American politics who became the first Black education minister of France in May. Ndiaye, who characterizes himself as the product of French meritocracy, represents a U-turn for the country’s education policy. His predecessor emphasized the acquisition of basic skills and free breakfasts; that Ndiaye has cited his role models as Black French colonial authors has raised predictable rancor from the right, who have implied he will place an undue emphasis on race in French schools.

Born to a French mother and a Senegalese father studying at a grande école, Ndiaye was briefly a member of the Socialist Party; although in his academic career, he positioned himself as politically neutral. In 2020, he co-wrote a report on diversity in the Paris Opera. This foray into the cultural realm from the ivory tower may be, journalist J. Alex Tarquinio speculates, what caught French President Emmanuel Macron’s eye. Following his rapid ascent in Macron’s cabinet—education ministers in France enjoy vastly more power than their American counterparts because schooling is so centralized—Tarquinio looks for clues as to how Ndiaye’s academic career might spill over into his political one.

In August 2021, Umit Ozdag founded his own political party, the Victory Party. Offering a similar program as Italy’s League, the Victory Party advocates for welfare policies for native members of Turkish society while reducing access to outsiders. Ahead of next year’s elections, Ozdag wants to appeal to the estimated 16 percent of voters in Turkey who classify themselves as undecided—a group he believes harbors neglected anger about uncontrolled immigration.

No matter the outcome of the forthcoming election though, journalist Idil Karsit argues in this profile that Ozdag has already caused a “political tornado.” His inflammatory rhetoric about refugees, mostly Syrians, and his exploitation of existing sociocultural tensions as the economy worsens has, to some extent, been adopted by more mainstream politicians. “Whoever wins in the 2023 elections will have to answer to the collective anger he has mobilized,” Karsit writes.

You are commenting as . Change your username | Log out
Tag: Politics

The Myth of American Exceptionalism

The idea that the United States is uniquely virtuous may be comforting to Americans. Too bad it's not true.

5 News Stories That Packed a Punch

From Russian kill lists to refugees and rebels, these were among FP’s most impactful news stories this year.