Iran is up, America is down. North Korea isn't as bad as you think. But what do numbers rating the stability of a country really mean?

Index by the Fund for Peace -- Illustrations by Luke Shuman

In 2013, just how much did the United States suffer from the government shutdown? Did India’s economic slowdown affect its overall security and governance? And did the Arab Spring make any lasting progress toward genuine democracy?

The very structure of a country, even a healthy one, can be challenged by overwhelming events during the course of a year -- and the consequences inform not only the legitimacy of the state, but also the experiences of its citizens, often for decades to come. For 10 years now, the Fragile States Index, created by The Fund for Peace and published by Foreign Policy, has put countries into perspective by providing an annual snapshot of their vitality and stability (or lack thereof) and ranking them accordingly. (This year, the name of the project has been changed from the Failed States Index to the Fragile States Index. While the methodology remains the same, the new title is an acknowledgment that all states, to different degrees, face conditions that threaten the livelihoods of their citizens.)

What these metrics often show is that rarely, if ever, do states change fundamentally from year to year: Nine of the index’s 10 most fragile states in 2013, for instance, held the same distinction the prior year. Look a little closer, however, and there are significant, even surprising, developments and trends -- in single countries, across regions, and even within the index’s 12 political, economic, and social indicators.

The 2013 overview uses data gathered throughout that calendar year (so readers will have to wait a while longer to learn how Russia’s foray into Ukraine affected both countries). The index shows how, within a relatively short time frame, the promise of nascent democracies can quickly unravel. The hope for groundbreaking change in Libya was quashed, as the embattled central government struggled to bring armed militias to heel. And despite optimism from its economic and political benefactors in the West, South Sudan -- the world’s newest country -- took a dive in stability as it descended into civil war.

But there is good news too. Iran, having initiated tentative nuclear negotiations with the West, has the most improved score on the index. And several emerging economic powerhouses weathered internal strife -- an unprecedented corruption crackdown in China and anti-government protests in Turkey, for instance -- to see improvement in their scores.

More unexpected, perhaps, is that North Korea is less fragile than one might think, as the index’s “Human Flight” indicator shows. And though the West likes to pride itself on being stable in comparison with the rest of the world, the data show this isn’t necessarily the case on all fronts: Partisan bickering and the controversial activities of the National Security Agency, for instance, worsened the U.S. score.

Although the overall picture here might seem familiar, the numbers themselves reveal narratives that were unforeseen, and perhaps overlooked, in 2013.

Least Fragile Most Fragile
Scroll to Zoom the Map, Click and Drag to pan

Click on any table header to sort the table by column

Demographic Pressures: Concerns related to population, such as food scarcity, population growth, and mortality rates. Refugees and Internally Displaced Persons: Concerns associated with population displacement and refugees. Group Grievance: Tensions and violence among groups within the state. Human Flight and Brain Drain: Levels of migration out of the country including, but not limited to, the flight of refugees and educated individuals. Uneven Economic Development: Disparities in development among different ethnic and religious groups and among regions within the state. Poverty and Economic Decline: Poverty rates and economic performance. State Legitimacy: Corruption and other measures of democratic capacity, such as government performance and electoral process. Public Services: Provision of education, health care, sanitation, and other services. Human Rights and Rule of Law: The protection and promotion of human rights. Security Apparatus: Internal conflict and the proliferation of nonstate armed groups. Factionalized Elites: Conflict and competition among local and national leaders. External Intervention: Levels of foreign assistance as well as imposed interventions, such as sanctions or military invasion.

At first glance, it would seem Turkey had a rough year: Corruption scandals forced several ministers to resign, anti-government protesters clashed with police in a number of cities, and the country continued to incarcerate journalists at an alarming rate. Yet the country made modest progress on the Demographic Pressures, Public Services, and Security Apparatus indicators, to emerge as one of the index’s most improved countries.

The political brinkmanship that has defined Washington throughout Barack Obama’s administration came to a head during the government shutdown in October 2013. As a result, the United States had its worst score on the Factionalized Elites indicator in the nine years that the country has been included in the index. The release of classified NSA documents by Edward Snowden, as well as the April 2013 bombings at the Boston Marathon, also contributed to the country’s comparative decline.

President Robert Mugabe’s administration maintains an abysmal human rights record. Yet a little good news may finally be coming out of Zimbabwe. In 2013, the government instituted some positive, albeit tenuous, political reforms, including approving a new constitution that limits future presidents to two terms. And while still struggling with poverty, Zimbabwe has seen significant economic growth in recent years.

SINGAPORE: the rich and the rest

Singapore remains one of the world’s richest countries. But while its economy continued to perform well in 2013, the country faced pressures in other areas that worsened its overall rating. Pollution, due in large part to the burning of forests in nearby Indonesia, was at record levels. In December 2013, 400 foreign workers clashed with police -- the country’s largest riots in more than four decades -- after an Indian migrant worker was reportedly hit by a bus and killed; the incident highlighted simmering resentment among some low-wage foreign laborers about perceived discrimination and poor working conditions. 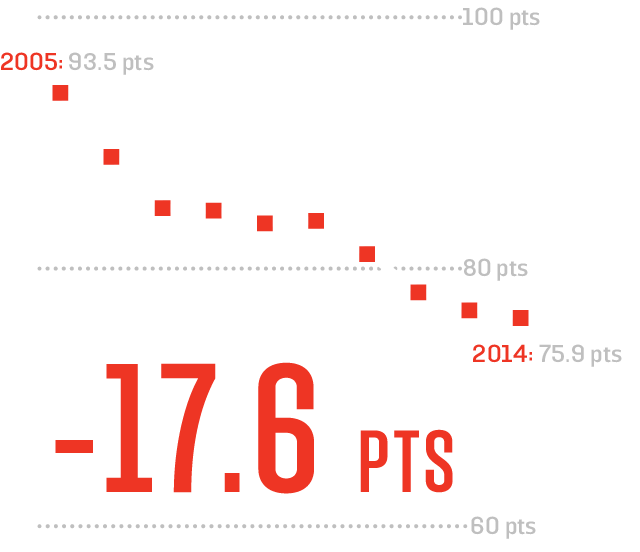 Ten years ago, Bosnia-Herzegovina was still struggling to build a sustainable state after the 1990s war that tore it apart. Since then, the country has improved more than any other country in the index. Major concerns about ethnic tensions, corruption, and governance remain, but the disparities among different groups and regions have greatly improved, as have measures related to refugees, internally displaced persons, and demographic pressures. 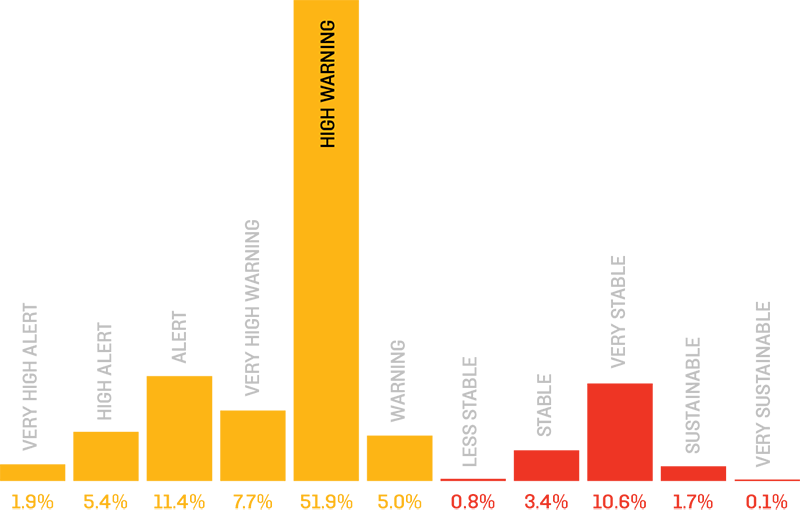 At its core, beneath the indicator scores and state-by-state rankings, the Fragile States Index is a measure of the livelihoods of real people. Security-force abuses and inadequate public services, for instance, are not simply inputs into a formula; they are parts of citizens’ everyday reality.

So how, then, is most of the world living? It turns out, not so well. With “Very High Alert” describing those nations that are the most fragile, “Warning” describing those that fall in the middle, and “Very Sustainable” as the most stable countries, a little over half of the index’s populations live in the “High Warning” group of states, while only 17 percent live in more stable nations. To look at the data another way, a little more than 83 percent live in “Warning” nations or worse.

Photos of life and death in the world’s 50 worst places. 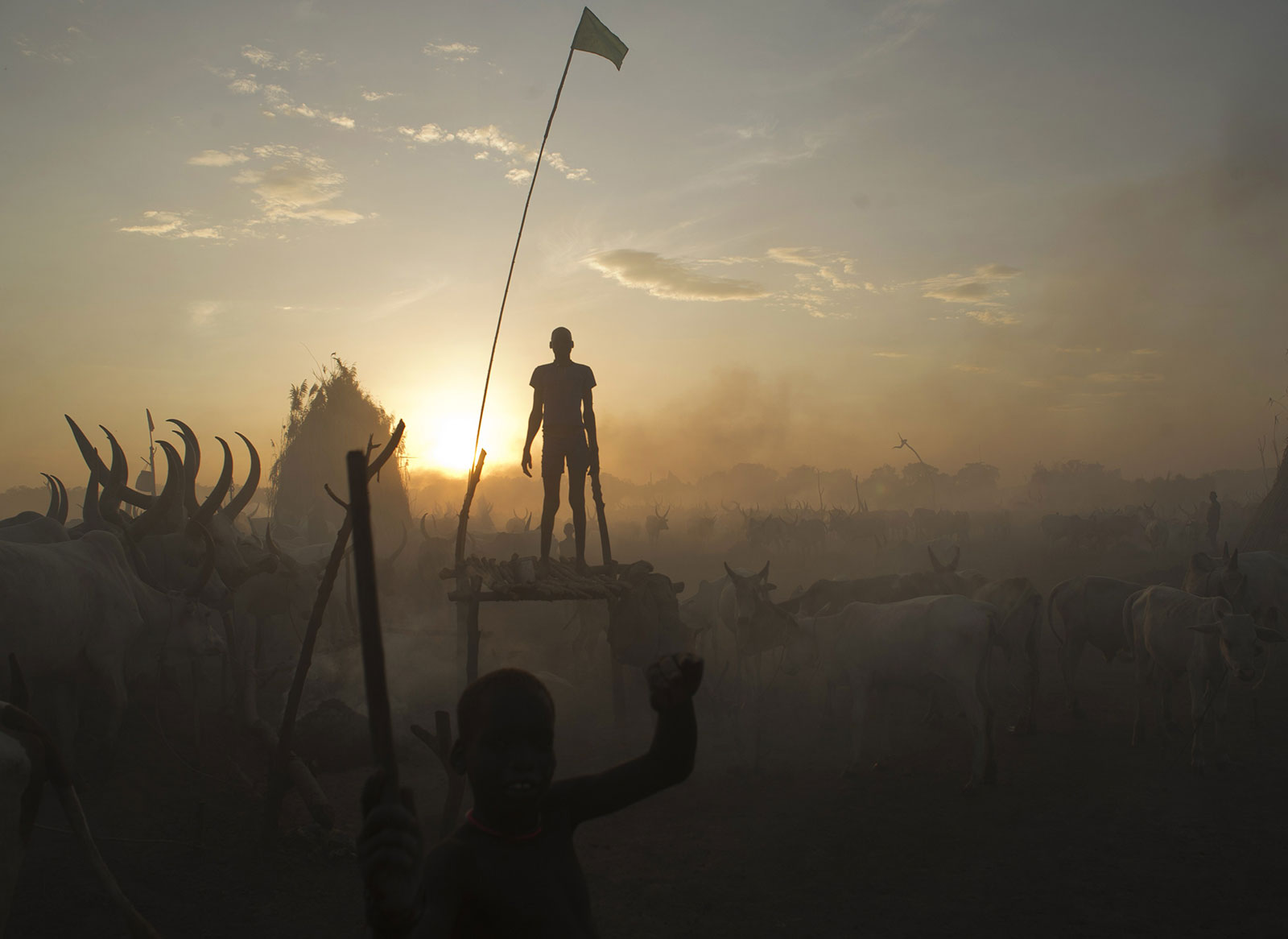 From Failed to Fragile

Foreign Policy talks to Krista Hendry, executive director of The Fund for Peace, on what we’ve learned after 10 years of the index and what to look for on next years list.

Foreign Policy: It’s year 10 of this index. Why the change from “failed” to “fragile” states now?

Krista Hendry: In the beginning, when we decided to call it the Failed States Index, we really wanted bring attention to the fact that people were living in these countries with poor conditions in terms of human rights, violence, and terrorism. It worked, and we garnered attention. But over time we realized that the name “failed states” started to become an issue itself. And so, we decided that instead of talking about whether a state is failed, it made more sense to talk about fragility, because that puts the emphasis on the human beings who are suffering in many of these states.

FP: What trends or takeaways pop out when looking at the decade-long arc of this index?

KH: One of the most important things I’ve noticed is that you can have improvements on things like economics and even delivery of public services. But when we don’t also see the accompanying improvement on issues such as the protection of human rights and addressing grievances between groups, it is often those states where violence erupts most rapidly.

FP: We’ve seen some dramatic improvements this year, notable among them that Sierra Leone is the first state to graduate out of the worst of the worst. But why is it that so many nations stay consistently within the top 10?

KH: Unfortunately, a country can become more fragile or become quite violent quickly and go up the list very easily. But going down the list, which means increasing stability, takes a generation. So what you’re seeing with Sierra Leone is that there was constant capacity-building to create a better-functioning state with knowledge and expertise on the ground. What the international community needs to realize is that these are long-haul projects. We just can’t sit here and wait for 10 years and then decide to leave when it doesn’t work right away. We have to learn to stick it out. That said, only the country itself can pull itself out of the top 10; at best, the international community can support these efforts.

FP: In the first six months of this year, since the research for the 2014 Fragile States Index was completed, we’ve seen some dramatic events around the world. What has happened that might affect the index for next year?

KH: One country that concerns us is actually the one that tops the index: South Sudan. Despite the fact that we cut off our data in December 2013, we could already see that this state was going to be prone to violence and lacked the necessary state institutions to quell it. Syria is another nation about which people are constantly asking, “Why is it not higher on the list?” But this highlights a key difference between a strong state that doesn’t take care of its people very well and is even hurting its own citizens, versus a state that couldn’t protect its citizens even if it wanted to.

And then we look at other countries: the annexation of Ukraine by Russia, recent events in Iraq and in Thailand. These are other countries where dramatic events since the index ended will be shaping next year’s scores.

FP: For the hopeful among us, what can we take from the Fragile States Index?

KH: I really do believe that Sierra Leone coming out of the top 10 is a success story. We should look at that and ask: What did the government get right? What did the international community get right? We need to do that because the index shows us that countries can backslide. As optimistic as we want to be, we need to mindful that strong countries are strong across the board.

We won’t be seeing any countries turning their economies around overnight if they are facing demographic pressures or have huge political concerns, like corruption or human rights abuse. The index looks at broad, holistic categories that will impact success of societies and nations. And those in the development community, with certain expertise or specialization, need to realize that these issues are all interrelated. None of us can fix any of these issues alone. And understanding that is a big part of the challenge.