The world’s authoritarians are on the march—and the West helped pave the way.

The year 2018 was springtime for strongmen everywhere. It was the year Xi Jinping put an end to collective leadership in China, made himself president for life, and put a final nail in the coffin of U.S. Sinologists’ credibility as predictors of Chinese behavior. (They’ve been prophesying liberalization for decades.)

Elsewhere in Asia, North Korea’s Kim Jong Un won the admiration of U.S. President Donald Trump because of the high quality of his dictatorial control. Poland’s dubiously democratic government became a favorite of Trump’s, as did Hungary’s proudly illiberal prime minister, Viktor Orban. Orban even got a hero’s welcome in Israel, where the prime minister’s son Yair Netanyahu called him the “best leader in Europe.” In Nicaragua, Daniel Ortega solidified his position as the new Anastasio Somoza, whom he overthrew in the name of the people four decades ago.

In Venezuela, Nicolás Maduro managed to hang on, despite being the only dictator in the world the Trump administration seemed not to like. And in the Middle East, the year’s best drama came when one autocrat, Turkey’s Recep Tayyip Erdogan, exposed another, Saudi Crown Prince Mohammed bin Salman, for apparently ordering an assassination worthy of Goodfellas.

[Human beings are rarely rational—so it’s time we all stopped pretending they are, Fareed Zakaria writes.]

Mohammed bin Salman will probably be just fine—the easily distracted U.S. media is already forgetting about the grisly killing of Jamal Khashoggi and so will Congress, just as it overlooked for years Saudi brutality in Yemen. U.S. newspapers and television scarcely even cover the equally murderous Egyptian military dictator Abdel Fattah al-Sisi, who gets the red-carpet treatment whenever he visits the United States. The Trump administration, like the Obama administration before it, sees Middle Eastern dictators as essential bulwarks at a time when both administrations sought to reduce the United States’ involvement in the Middle East as much as possible.

Today, academics who urge retrenchment in U.S. foreign policy argue that Washington should accommodate “diversity” in the world—perhaps a nice mix of tyrants and would-be tyrants to go along with the dwindling number of democracies. As Harvard University’s Graham Allison puts it, America needs to adapt “to the reality that other countries have contrary views about governance and seek to establish their own international orders governed by their own rules.” Don’t worry. It has.

Autocracy is making a comeback because too many in the West act like late 19th-century racial imperialists; they think Arabs and others lacking so-called Judeo-Christian traditions can’t handle democracy. For decades, of course, Americans did not believe Catholics were fit for democracy either, because they supposedly obeyed the authoritarian dictates of Rome; then it was Asians with their Asian values; now it is Muslims, who can’t be allowed to choose their own leaders because Americans don’t like their choices. So Washington prefers that they be ruled by strongmen. Order first, liberty later—as Samuel P. Huntington and Jeane Kirkpatrick argued back in the 1960s and 1970s.

[2019 could be a defining moment for U.S. trade policy, Douglas Irwin writes.]

Authoritarianism is also on the rise because dictatorships have money to throw around. And unlike democratic leaders, they don’t have to tell anyone where the money is going. So even poor African nations, such as Zimbabwe and Egypt, can spend millions of dollars to hire top Washington lobbyists to make their cases and fend off pesky congressional pressures. The oil-rich Persian Gulf potentates, meanwhile, already practically own Washington, feting the powerful in their palaces and effortlessly landing top-level meetings. Rumors abound about what benefits senior Trump officials may have received from the Saudi crown prince. After all, the cash of Russian and Ukrainian oligarchs that flowed into the accounts of the now convicted Paul Manafort and his associates, as well as to top law firms lending a hand to the cause of Ukraine’s corrupt former strongman, has now been mostly revealed. Imagine what has not been disclosed. 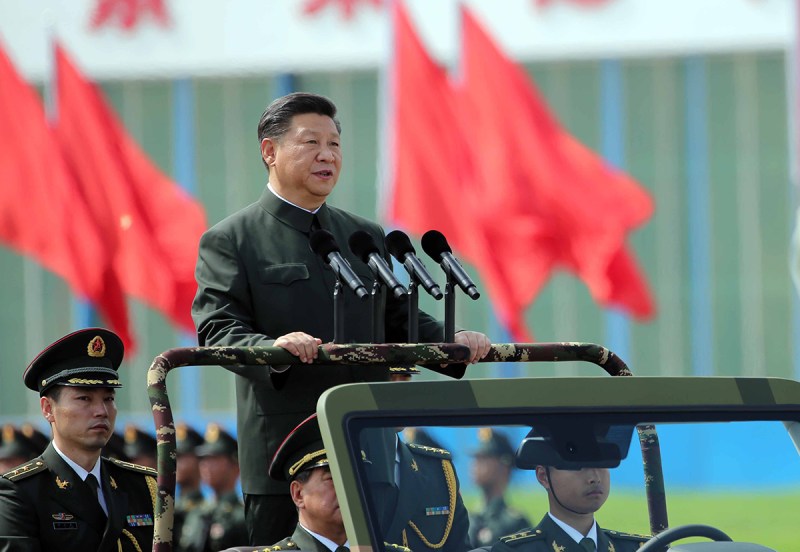 The Chinese dictatorship has had the best run of all. It barely had to spend a dime on lobbying; corporate America did the heavy lifting. Desperate to gain access to the Chinese market, U.S. corporations lobbied hard to grant China “most favored nation” status and entry into the World Trade Organization. They hired former cabinet officials; they endowed chairs at universities and think tanks across the United States; they convinced local chambers of commerce to approach members of Congress—all in the hope of convincing Washington and the public to view Beijing as a peaceful liberalizing partner. And they’ve succeeded so completely that it may soon be too late to do anything about the militarizing totalitarian power that emerged instead.

Finally, autocracy has been succeeding because it is just as natural to humans as democracy. People may seek recognition, as Francis Fukuyama argues, but that is not the only thing they seek. They also yearn for the security that comes from family, tribe, and nation. At times, they don’t want the freedom to make choices but prefer giving authority to a strong leader who promises to look out for them. That’s why it’s always potentially springtime for dictators.

Indeed, whether autocracy continues to be a growth industry in 2019—and there are worrying signs even in once lionized democracies such as India and Brazil—depends on whether those who believe in liberalism and democracy decide to make a stand.

After the end of the Cold War, Americans and Europeans thought they could sit back and enjoy an open road toward a post-historical world. It turns out that we have to keep fighting constantly if democracy is to survive. The jungle grows back.

Robert Kagan is a senior fellow at the Brookings Institution and a contributing columnist for the Washington Post. From 1984 to 1988, he held various positions within the U.S. State Department, including principal speechwriter for Secretary of State George P. Shultz and deputy for policy in the Bureau of Inter-American Affairs. He is the author, most recently, of The Jungle Grows Back: America and Our Imperiled World.

Finland’s envoy to Washington once shared a sauna with the Russian president. Here’s what he thinks the West got wrong about Vladimir Putin.

Ukraine Tries to Blow Up Russia’s Grip on Crimea

Ukraine isn’t taking credit for the strikes, but officials see them as an effort to cut Russian supply lines.

A Little Great-Power Competition Is Healthy for Africa

U.S.-China competition could benefit Africa by forcing each side to offer what it thinks it is best at.

Britain’s likely next prime minister is a foreign-policy hard-liner.