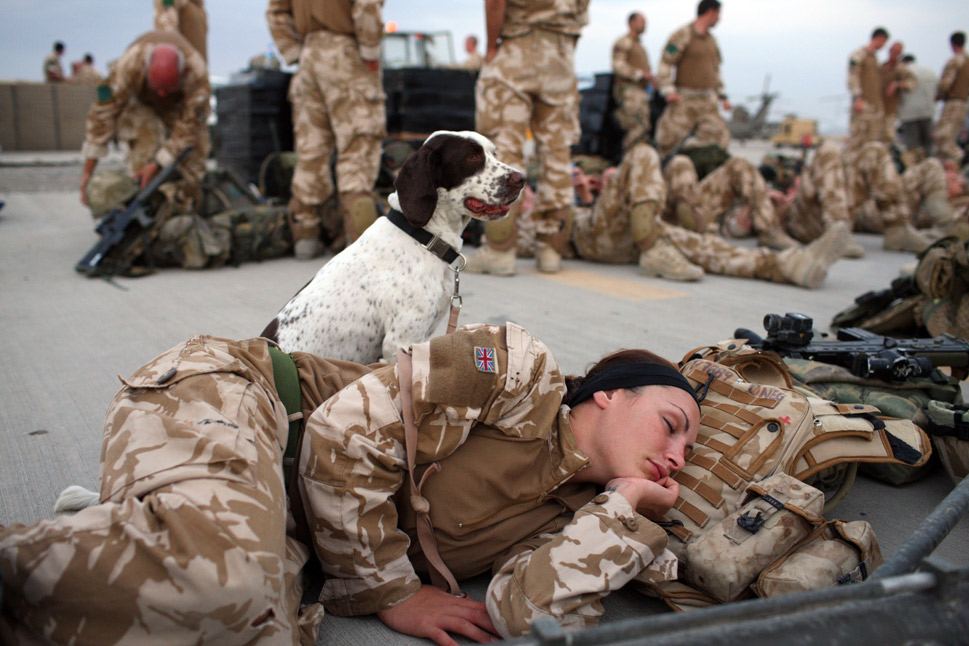 In spring 2010, the Royal Army Veterinary Corps, which has officially employed canines since 1942, established the 1st Military Working Dog Regiment, a new unit that consists of "284 soldiers and officers and about 200 military working dogs." These teams have supported operations in Afghanistan, Bosnia, Iraq, Kosovo, and Northern Ireland, according to the British military. In 2011, there were 70 military dogs at Camp Bastion, Britain's largest military base in Afghanistan. Britain's arms and explosives dogs are mostly labradors and spaniels, but the Telegraph reports that "some of the best Army dogs are crossbreeds" and "nearly one third come from private homes." When they're not on patrol, these dogs are housed in air-conditioned kennels that come fully equipped with an independent power source. The dogs even have the only pool on base -- all to themselves -- and soccer star David Beckham has stopped by for a visit. Perhaps one of the most moving war-dog stories to come out of Afghanistan is that of Cpl. Liam Tasker and his working dog, Theo. When Tasker was killed by a Taliban sniper in 2011, Theo, who survived the ambush without injury, died only hours later. The cause of death was never determined, but some surmised that the bond between the two had been so strong that the dog died of a broken heart. In this photo, arms- and explosive-detection dog Leanna watches over her handler Lance Cpl. Marianne Hay, a soldier in the Royal Army Veterinary Corps, as she rests on Aug. 3, 2008, at the Kandahar Air Field in Afghanistan. Marco Di Lauro/Getty Images

War Dogs of the World

War Dogs of the World

Countries like Italy and Spain now rely less on Russian gas, and for once, they may bail out Germany.