The Shanghai Cooperation Organization summit will be held in Dushanbe, capital of Tajikistan, on Thursday and Friday to discuss, among other things, what role the organization should play in addressing the Afghanistan issue, especially because the war the United States launched in 2001 has not only increased poverty but also reversed the economic development cycle in the country.

The Shanghai Cooperation Organization summit will be held in Dushanbe, capital of Tajikistan, on Thursday and Friday to discuss, among other things, what role the organization should play in addressing the Afghanistan issue, especially because the war the United States launched in 2001 has not only increased poverty but also reversed the economic development cycle in the country.

Since the US has failed to restore peace or stability in Afghanistan despite its 20-year occupation, it should not expect other countries to clear the mess it has left behind.

However, the neighboring countries, which have borne the brunt of the spillover effects of the US' war in Afghanistan, have to coordinate their policies and work together to help stabilize the situation in the region. As the SCO is a multilateral organization whose primary goal is to combat terrorism and safeguard regional security, it has to weigh its regional responsibilities and the role it should play now that the US has withdrawn from Afghanistan and the Taliban have returned to power.

The SCO comprises eight members (China, India, Kazakhstan, Kyrgyzstan, Pakistan, Russia, Tajikistan and Uzbekistan), and four observer countries (Afghanistan, Belarus, Iran and Mongolia). SCO member states include Afghanistan's close neighbors Tajikistan, Uzbekistan and Pakistan, and major countries in the region such as China, India, and Russia. And since these countries are deeply concerned about the situation in Afghanistan, the SCO is expected to seek to promote political reconciliation in the country through multilateral negotiation.

In July, the foreign ministers of the SCO member states issued a joint announcement saying they will "continue to assist the Afghan people in their efforts to rebuild their country", and are keen on "making the country peaceful, stable and prosperous".

Criticizing the US for its hasty and chaotic withdrawal, Chinese State Councilor and Foreign Minister Wang Yi said the US and its allies have the responsibility to provide economic and humanitarian aid for Afghanistan, and asserted that China supports an "Afghan-led and Afghan-owned" reconciliation framework and called on neighboring states to help improve the situation in the country.

In view of the complicated situation in the region, the SCO should play a constructive role in at least some aspects. First, the SCO should continue combating terrorism and maintaining regional stability, while making greater efforts to address the security issues in and around Afghanistan and using conflict-prevention mechanisms to ensure regional security.

Since the SCO has made safeguarding regional security one of its top priorities, it should further strengthen its anti-terrorism structure, in order to better combat terrorism, separatism and extremism in the region.

Second, the SCO should use its advantages as a multilateral organization to establish an integrated mechanism promoting interaction between Afghanistan and key neighboring countries to help the Afghan people in their efforts to restore peace and stability, and rebuild the country. The SCO-Afghanistan Contact Group, established in 2005, could play a valuable role in this respect. There is also a need to include Afghanistan in multilateral cooperation mechanism under the SCO framework as a contributing country.

Third, together with the international community, the SCO should provide economic assistance for Afghanistan, so as to facilitate its economic development. On Sept 9, China announced 200 million yuan ($30.96 million) worth of humanitarian aid, including grain, winter supplies, vaccines and medicines, for Afghanistan.

To help establish an "Afghan-led and Afghan-owned" framework, it is essential to provide practical reconstruction support for Afghanistan so it can tackle issues such as drug abuse and the COVID-19 pandemic, and promote sustainable development. The SCO should also work with non-member states to help improve the overall situation in Afghanistan, so the country can pursue development. This is particularly important, because the more economically developed Afghanistan is, the lower will be its security threat in the region.

And fourth, the SCO should encourage the international community to hold the US and its allies accountable for the mess they have created in Afghanistan. It should also reflect on the broader and long-term issues. For example, since the US used its "war on terror" as a pretext to effect regime change in and occupy Afghanistan for almost 20 years, the SCO should discuss and work out a new governance model that fully respects the sovereignty and self-determination of other countries. In this regard, the regional integration model of the SCO could pave the way for a new, flexible supranational governance system. 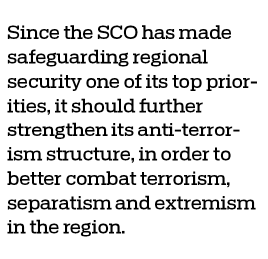 The views don't necessarily reflect those of China Daily.

This content was paid for and created by China Daily, People’s Republic of China. The Foreign Policy editorial team had no role in this advertisement’s creation.