Beginning in May 2019, Japan will host the G20 Summit and ministerial meetings for the first time. Global leaders, representing countries that hold around 80 percent of the world’s GDP, will converge in Japan to discuss the most pressing issues of our time. Striving not only to provide a backdrop to productive meetings, Japan also aims to advance discussions and showcase its own innovative development models. 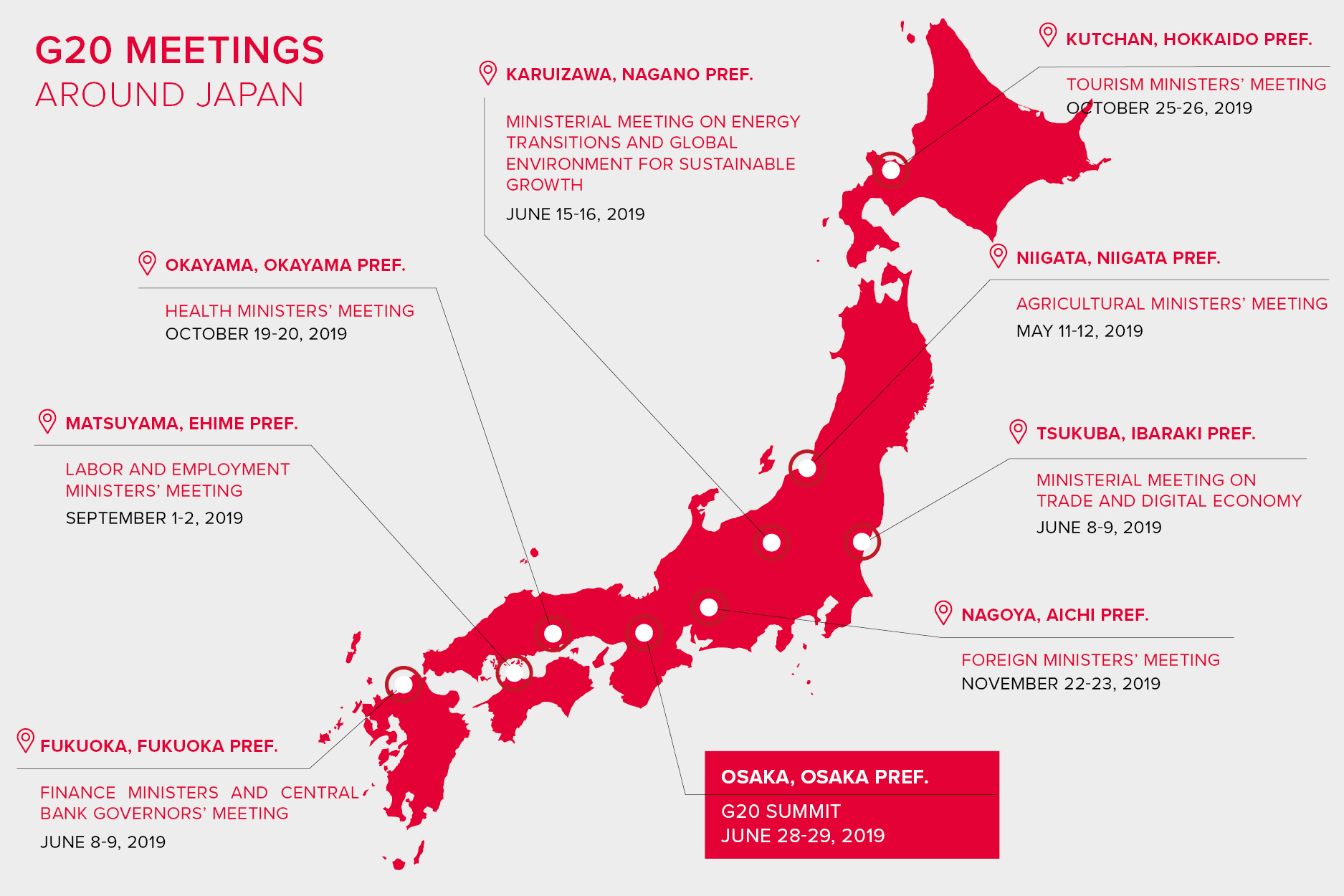 Japan’s bustling metropolis of Osaka will host the main G20 Summit Meeting, which expects to gather around 30,000 people including many of the world’s top leaders. No stranger to welcoming guests, this is both a commercial hub of Japan and one that receives around 10 million foreign visitors per year. With its strong infrastructure and a commitment to playing a serious role on the global stage, Osaka has also been chosen to host Expo 2025.

The warm seaside city of Matsuyama is well known as a pleasant place to visit and live in. Now, the city’s government is pioneering initiatives to improve the work environment, like flexible schedules, and improved efficiency through technology.

“Health is the foundation for building a sustainable city,” says Okayama’s mayor. Putting that philosophy into action, Okayama has become a hub for advanced medicine and boasts some of Japan’s top ratings for quality and availability of healthcare.

Already globally famous as a place for retreat and reconnection with nature, the resort town of Karuizawa hopes this ministerial meeting will constitute a turning point in terms of how the world approaches environmental issues.

Kutchan’s scenic mountain landscape and powder-soft snow have turned it into one of Japan’s top resorts. With tourist numbers having boomed over the last 20 years, the town hopes to share and learn best tourism practices.

Home to highly productive agriculture and fishing industries, Niigata is globally recognized for its premium rice and sake. At the ministerial meeting, Niigata will highlight its cutting-edge agricultural practices and efforts to create a new food culture.

In Tsukuba, known as Japan’s leading science city, a high-tech culture is deeply engrained by the use of innovative digital technologies to solve social issues. In this meeting, Tsukuba hopes to act as a global role model for cities in the digital era.

Aichi is one of the world’s leading industrial regions. Home to corporations like Toyota, it has a long tradition of fusing technology with tradition. As host of this meeting, it hopes to showcase its strengths and give rise to improved global cooperation.

Boasting Japan’s largest startup accelerator and a strategic zone for new businesses, Fukuoka is considered Japan’s most startup-friendly city. Innovation is also surging in the financial sector, and this meeting is set to be of great significance.