Heavy funding, shrewd government planning and a pro-PPP culture are allowing Greece to build big across multiple modes of transport and execute its obvious role as a regional logistics hub

With maritime transport accounting for 80% of global trade by volume, Greece’s geographical position as an entry point to Europe from Asia lures in logistics and manufacturing investors. This is why the government is seeking funding to achieve its €25-billion target for large-scale infrastructure projects. Their completion will imply increased trade flows, and greater stability and competitiveness across the region.

Minister of Infrastructure, Transport and Networks Christos Spirtzis explains how such projects will encompass ports, airports, roads, railways and freight centers. “Currently,” he says, “goods enter by sea through the Ports of Piraeus, Thessaloniki, Patra, Kavala, Alexandroupolis and Igoumenitsa. We now need logistics hubs connected with a fast railway network in order to distribute these goods.” The government maintains that to cater to international freight transport needs, it must foster a network of intermodal transport. Many such projects, on hold during the crisis years, have happily recommenced since 2014.

The Ministry of Infrastructure wants to connect the wider region via three new routes to the Balkan countries and a fast railway between Asia and Central Europe, crossing central and western areas of the Balkans. Spirtzis says: “We have to act fast to provide a cheaper and faster alternative route to the traditional port routes for Asian goods reaching Central and Western Europe.” However, the government is realistic in its need for support. “Projects of this scale have many positive consequences, but cannot be completed without the participation or investment of large multinational companies,” Spirtzis insists.

Indeed, Public Private Partnerships (PPPs) are key to attracting funding from those global players possessing the capital and technical knowhow required for complex projects, and a variety are set to be tendered. Spirtzis places great value on the PPP model: “private sector participation is key for supplying high value-added products with an emphasis on new technologies. Synergies are needed between the private and the public sectors because the former needs the security that the public sector can provide for the execution of projects.”

It is thanks to a shift in Greek mentality that PPPs have the green light. Pre-crisis, infrastructure projects were utilized as a way to spur economic growth, but relied heavily on government funding. Major Greek construction companies that during the crisis diversified abroad are today committed to enabling the success of these projects. Dimitris Koutras, Chairman of one such company, Aktor, says “the future of our country entails the participation of the construction companies in large-scale development projects. With the accurate budget, appropriate time schedule and close monitoring, we enable every project to become productive and profitable for investors.”

Another Greek construction giant, J&P-AVAX, had its first PPP project 20 years ago with the Rio-Antirrio Bridge. Managing Director, Konstantinos Mitzalis, pinpoints many current opportunities, among them the Egnatia Railway and the logistics centers in Thriassio Pedio, Thessaloniki, Larisa and Alexandroupolis. “These projects are of immense importance to the country,” he says. PPPs imply lower risk for investors. The stable environment the government is committed to guaranteeing adds further incentive still.

Having lost its prominence, the Greek railway is returning to the government’s radar as a logistics facilitator

The Greek government has earmarked railways as top priority. Seen in the context of intermodal projects linking railways, ports and logistics centers, the mode of transport will act as a key cog in international supply chains. Major projects pending completion include the railway network connecting logistics centers in ports serving as logistics hubs, such as the Port of Volos.

Also, work on logistics centers is gaining international interest with Thriassio Pedio, set to be the largest freight railway station in the Balkans. A breakthrough in the tender at the end of 2016 ended ten years of deadlock. The joint venture of Goldair and ETVA Industrial Parks has seen €250 million euros pledged as part of a binding offer for the construction and management of the hub. Kostas N. Petrakis, CEO of OSE (Hellenic Railways), the major Greek national railway company says “the railway has better financial, environmental and social performance than any other mode of transport, so if logistics is to be developed it will have to work with the railway in a win-win environment. Thriassio Pedio portrays this paradigm perfectly.” Legislation, too, dictates that all logistics centers of a national scope are obliged to be linked to the railway network.

“The railway has better financial, environmental and social performance than any other mode of transport. Logistics will have to work with the railway in a win-win environment.”
Kostas N. Petrakis, CEO, OSE (Hellenic Railways)

Athanasios Schizas, CEO of GAIAOSE, responsible for the real estate portfolio of the Greek railway says “synergies are necessary amongst trains, ports and airports. Multinational companies, and especially those involved in the technology sector, need to send cargo to Central Europe quickly and at a low cost. The railway could really be that link.”

After years of delays, the construction works on the Metro of Thessaloniki, Greece’s second-largest city, resumed in 2016, and are set for completion in 2020.

Theodoros Papadopoulos, Managing Director of Attiko Metro, which is responsible for driving forward its construction, says “it is a key infrastructure project for the city and will serve all the citizens of Thessaloniki.” It is expected to serve more than 65,000 passengers on a daily basis. It will also render Thessaloniki more attractive for tourists for obvious logistical reasons but also because during the project, major archeological remains have been uncovered. “Many of the findings will be exhibited within the Metro stations in order to become part of the modern city,” explains Papadopoulos. “This is an example of embodying the ancient civilization and history of the city within a modern structure.”

Another major project in the pipeline is the tender for the fourth line of the Athens Metro – also under Attiko Metro – which was launched in April 2017, and should be completed in 2025. “The budget sought for the first section of line 4 is approximately €1.4 billion and the rest of it, together with the extension of the other lines, requires approximately €2 billion.” Papadopoulos says they are directing energies at a PPP scheme to obtain these. “The carrying out of these projects plays a key role in the national economy; creating jobs, and increasing consumption and expenditure.”

The development of the Thessaloniki Metro project created some 1,500 direct jobs and 3,000 indirect ones. The re-initiation of these projects stirs confidence: “Apart from the economic boost that the Metro project has given the city, you can now sense a flair of confidence in the air,” concludes Papadopoulos. 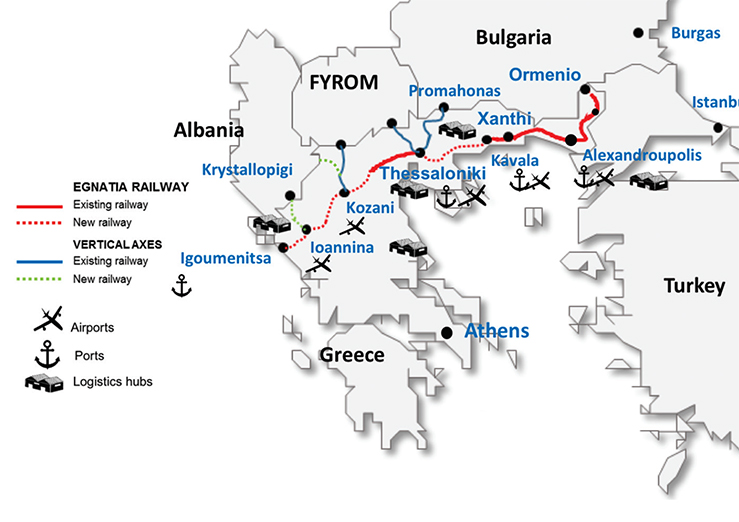 New tracks will connect the entirety of Northern Greece, as well as the ports of Alexandroupolis, Kavala, Thessaloniki and Igoumenitsa, under the Egnatia Railway Project. Access will be opened up to the vertical axes of neighboring and Central European countries.

The 565km-long rail corridor signifies a 180-degree turnaround for the Greek railways. As Kostas N. Petrakis, CEO of OSE (Hellenic Railways), says “at the moment the share of goods transported by the Greek railway is 2%, very low compared to 25% in countries like Austria and Switzerland.” Greece will be the linchpin linking Europe and Asia as the project, managed by ERGOSE, an OSE subsidiary, covers both passenger and freight transport needs. Athanasios Vourdas, former Managing Director of ERGOSE and Secretary General of the Ministry of Infrastructure, Transport and Networks says “the core railway policy for the Ministry lies in the development of the Greek railway and its exit to Central and Eastern Europe. These infrastructure projects are managed by public entities and are either co-funded by the European Union, following a PPP model, or privately funded. Timing is key as we believe this project can help turn the crisis into an opportunity for Greece and transform the country into a big multimodal hub.” 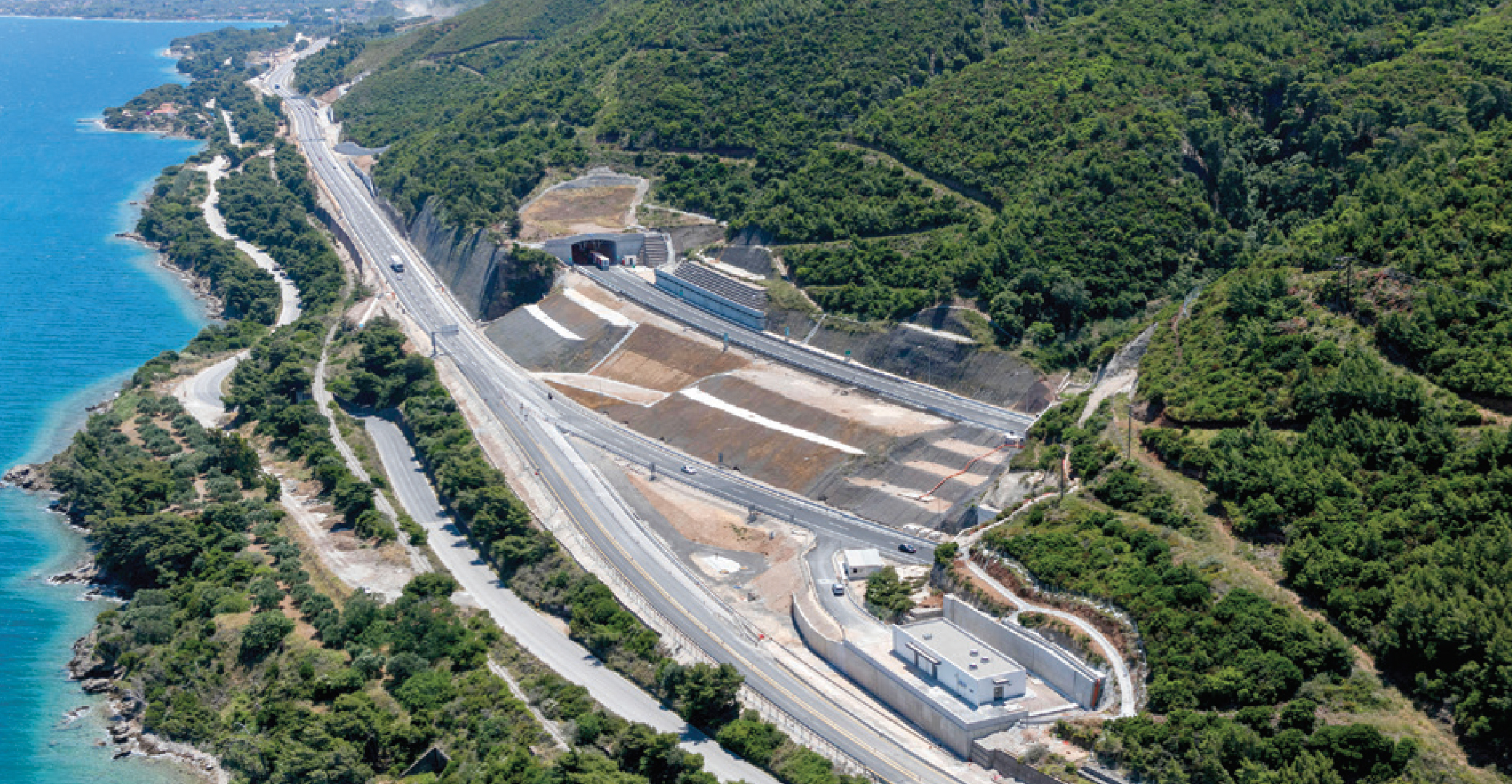 The Port of Piraeus is the largest passenger port in Europe

Greece is turning to one of its time-tested tools for economic success, by drawing motorway projects to a
speedy conclusion

In the first quarter of 2017, the Ministry of Infrastructure, Transport and Networks reached an important milestone with the conclusion of work on four out of five planned highways under the “Greek Motorway 5” project. The result comes in the form of the new Ionian Highway, Olympian Highway, E65 and the middle section of the Athens-Thessaloniki Highway (Maliakos-Kleidi). All became fully operational through concession agreements with the private sector and have drastically changed the country’s routemap, benefitting the national economy, users and local societies at the same time.

“The Egnatia Odos highway connects the big economic and industrial centers of the East and the West, acting as a solid commercial linkage point between them.”
Apostolos Antonoudis, Chairman, Egnatia Odos

The Ionian Highway stands out by connecting the three major ports of Patra, Astakos and Igoumenitsa, as well as three airports: Araksos, Aktio and Ioannina. It also joins western Greece with the rest of the country.

The development of highways has long proven fundamental for the regional development of Greece. The Romans initially used the early Egnatia route for military purposes, but as it became more widely used it rapidly developed into the main road from the Adriatic to the Black Sea. Apostolos Antonoudis is Chairman of Egnatia Odos, the entity responsible for the design, construction, operation and maintenance of the 670km-Egnatia Highway, which now runs across Northern Greece and into neighboring countries. Antonoudis explains, “the Egnatia Odos highway connects the big economic and industrial centers of the West and the East, acting as a solid commercial linkage point between them.”

In light of the fact that the ports of Igoumenitsa, Thessaloniki, Kavala and Alexandroupolis are adjacent to Egnatia, Antonoudis signals how “the highway also serves as the entrance from the Mediterranean into Central Europe, making clear the importance that this highway gives to the development of logistics hubs all across Northern and Northwestern Greece.”

Egnatia Odos undertook the design and construction management of separate vertical axes, too, which link the Egnatia Motorway with Albania and Bulgaria. They have successfully completed 271km of the 442km of the planned network.

Landmark privatization deals in the infrastructure sphere are being concluded. Conspicuous among them is Chinese conglomerate COSCO’s acquisition of a 67% majority stake in Piraeus Port in April 2016, seeing the port climb from 93rd to 38th biggest in the world. Captain Fu Cheng Qiu, its Managing Director, credits the government saying “it was not easy. But when COSCO moved all its business-after-transit containers from Venice to the port, the Greek government was very supportive. It gave us stable policies favoring investments and we thank them for that.”

The management of 14 regional airports by German-Greek consortium Fraport/Slentel will step up the competitiveness of logistics. Vice Chairman of Aegean Airlines, Eftichios Vassilakis, says “It means the airports are going to be developed positively. Fraport has specific standards to adhere to.” Ongoing privatizations furthering opportunities in the logistics sector include the port of Thessaloniki.

CEO of Hellenic Corporation of Assets and Participations – established to consolidate the Greek state’s assets under a common umbrella and exploit them optimally – Ourania Ekaterinari, says the idea now is to “create competitive tendering processes to attract the right mix of investors and generate revenues not only for the state but also the wider economy.