Greece – The odyssey to reinvention

After a successful conclusion to the Eurogroup’s second review of Greece’s current bailout program, coupled with a major economic transition and substantial regulatory reforms, the country is rapidly reinventing itself. Everything points towards 2017 being the year of the ‘Hellenic Turnaround’.

All signs suggest that the Greek economy is on its way back to growth, after seven years of recession, during which the country lost more than a quarter of its GDP. 2017 has already seen its economy grow by 0.4% in the first quarter and the country’s government is forecasting increases of close to 2% for both this year and the next – a target the European Commission sees as realistic and which became even more so with the Eurogroup’s recent completion of Greece’s bailout program review.

“We have completed the most difficult reforms, not only in technical terms, but also politically.”
Nikos Pappas, Minister of Digital Policy, Telecommunications and Media

Not only does the latest agreement mean an immediate disbursement of €8.5 billion, it also brings the country a step closer to medium-term debt relief measures and entry into the European Central Bank’s quantitative easing program. It provides a signal to the world that Greece is returning to economic normality and guarantees “much greater clarity for both Greek people and financial markets,” according to Minister of Finance Euclid Tsakalotos. 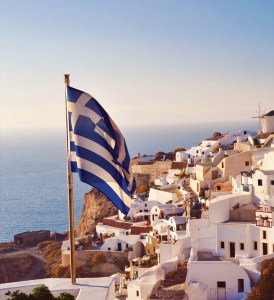 As part of the original 2015 bailout program, the Greek government recognized that it had to restore and safeguard fiscal sustainability, implement structural policies for competitiveness and growth, and modernize the state and its administration. Greece has moved quickly, with a massive reform process already implemented.

For example, new pension, income tax and indirect tax legislation is in place, coupled with measures for increased public sector transparency, the tackling of non-performing Greek bank loans, privatizations and increasing tax revenues by broadening the tax base.

These, as Nikos Pappas, Minister of Digital Policy, Telecommunications and Media explains, were “the most difficult reforms, not only in technical terms, but also politically.”

When President Barack Obama visited Greece in 2016, he said “the world, I don’t think, fully appreciates the extraordinary pain these reforms have involved, or the tremendous sacrifices that you, the Greek people, have made,” a sentiment echoed by Greek Prime Minister Alexis Tsipras, who has called the Eurogroup bailout review “an agreement that recognizes the sacrifices of the Greek people.”

The country still has major challenges ahead, though. The biggest of which is unemployment that, while seeing recent improvement, is still significant at 22.5%. Public and private sector debt are also high, with the latter hampering the banks’ ability to support recovery through the granting of new credit. And there are still difficult reforms in the pipeline, such as the achievement of privatization targets, set at €2.15 billion for 2017.

Light at the end of the tunnel

But Greece appears to be coming out of its crisis as a much stronger and more competitive country, that has a greater focus on entrepreneurship, foreign investment and a productive model that adds value and is export orientated. In 2016, exports grew by 10%, while investments increased 12% and, according to Odisseas Athanassiou, CEO of property developer Lamda Development, “there has been a substantial shift in mentality in the country with regards to foreign capital.”

The Deputy Minister to the Prime Minister, Dimitrios Liakos, confirms that foreign investment and international investor confidence are seen as key to creating the ‘Hellenic Turnaround.’ As part of the large-scale reforms, the government has put “special emphasis on creating a friendly investment environment that guarantees fair terms for all economic agents, a stable tax environment, modern liquidity instruments, and investment incentives,” he says.

In his view, Greece, which already offered many competitive advantages, not least its highly-skilled workforce and geostrategic location at the southern tip of both Europe and NATO, is rapidly turning “from being attractive, to being ideal for investments.”