Since the election of Petro Poroshenko in 2014, Ukraine has undertaken more reforms than it had since it gained independence from the USSR in 1991. From health care, education and financial reform to a rebooted judicial system and new geopolitical alliances, his administration has been decisively shaping the new Ukraine as a fair and free society that welcomes investors from around the world. And with GDP growth forecast to top 3 percent this year and an unprecedented amount of U.S. investment heading in, Europe’s largest country is already seeing the benefits of these historic actions

What has been the impact of American investment in Ukraine so far?

For me, it is very important that we listen to the voice of the investors, not only the voice of the Ukrainian government officials, parliamentarians or the president. When I first met President Donald Trump in the White House in the middle of last year, I presented him with a report from the American Chamber of Commerce. It consisted of the independent opinions of the different American companies who work in Ukraine, in which they confirm that during the last 2 to 3 years, the investment climate has improved significantly.

Soon after, the General Electric deal was signed, which is important because it is an extremely powerful global company and the deal was a $1 billion contract for locomotive supply and also to start local production of locomotives. In 2017, we also struck a deal to ship Pennsylvanian coal to supply the Ukrainian energy system and improve our energy independence from Russia. This is of great importance since Russia introduced an embargo against Ukraine during its aggression, in an attempt to destabilize us economically. But our economy has prevailed and even strengthened, despite these attacks.

In 2013, Russia’s share in our total economic turnover was over 30 percent. Today it’s about 9 percent, it is equal to the share of Poland. The share of the EU as a whole has gone up to about 40 percent. This is the result of the Deep and Comprehensive Free Trade Agreement (DCFTA). We also have efficient cooperation with American companies in agriculture, the fast-moving consumer goods (FMCG) sector and in the processing sector. Many companies, from Cargill to Bunge, are investing hundreds of millions of dollars in our port facilities, logistics and infrastructure. This is a very positive trend. At the same time, we have seen a significant increase in European business presence in Ukraine. In 2014, companies from Germany and Japan slowly came into the Ukrainian automotive industry. Today, I can state that not one German car exists without Ukrainian participation.

How has investing in Ukraine been beneficial to the companies entering this market?

We now have a huge return on investment. Most companies working in Ukraine plan on seeing double-digit profit. This sends a clear message that now is the right time and Ukraine is the right place. In 2013, before I was elected president, Ukraine was 137th in the in the World Bank’s Doing Business rankings, today, we are 76th. This is still not high enough, but it is the biggest progress any country has demonstrated in such a short lapse of time ever. I’m very proud to say that according to the independent estimations of international financial organizations like the World Bank and the IMF, Ukraine has instituted more reforms over the last 4 years than it had in the 23 years before. 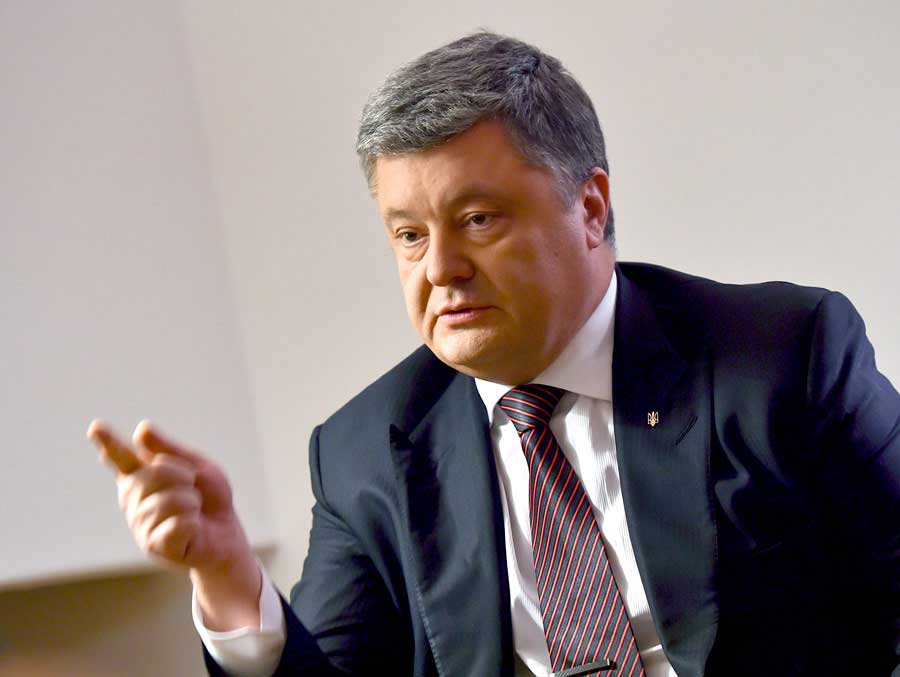 Photo: Office of the President

What have been the main reforms implemented since you were elected, particularly related to the investment sector?

We have enacted many economic reforms, but also others that have an impact on the overall investment climate. For instance, I launched a very important constitutional reform on judicial certainty that completely restarted the whole of the courts system in Ukraine. This is a message to investors that they can protect their interests in an absolutely independent court.

Anti-corruption reform has also been key. We have created a National Anti-Corruption Bureau, which is completely independent and has launched criminal cases against members of parliament, governors and ministers. The only thing I want is for the results of these steps to send those who have been corrupt to prison.

We also created a completely independent Anti-Corruption Prosecutor’s Office and the National Agency for the Prevention of Corruption, plus the fact that we are the only country in the world where all bureaucrats and public officials – 1.2 million people – sign and file electronic declarations to explain the sources of all their assets and income. This is a very effective step because one single mistake in this declaration can land someone in prison for 2 years. This is totally unique and the most effective anti-corruption legislation in the world.

In June 2018, I signed the Law of Ukraine “On the Higher Anti-Corruption Court” and will make every effort to launch the work of the new court by the end of 2018. We have engaged with foreign partners on it and it received the full agreement of the Venice Commission that it would be absolutely independent and serve its role to bring corrupt officials to prison.

What other reforms has your government implemented since 2014?

What I have mentioned so far is only a tiny part of the reforms. During the last eight months, there has also been pension reform, which was not necessarily popular, but we managed to get through a modern and just pension reform.

We’ve also instituted a health care reform. I think American readers can understand how complicated and difficult this can be, but we presented it and implemented it in a very short period of time. My rural area health care reform, which was done together with the World Bank and partners from Canada and Germany, has also been implemented, and I’m very proud to say that it has been absolutely effective for our 14 million people that live in rural areas.

We also launched a very special privatization law, making the process transparent, efficient and ensuring it is monitored by Western advisers. This is also a very effective anti-corruption step – to remove state bureaucrats from the management of these enterprises and create more effective models.

There was also a reform of the energy sector, an area which had previously been the primary source of government corruption. When I was elected as president, our energy monopoly through Naftogaz had a $10 billion deficit. Today, because of my reform, Naftogaz has become a profitable company and one of the most transparent in Ukraine.

The decentralization reform was another promise in my election campaign. When I was working on the parliamentary budget committee, the share of the local budget was 30 percent. Today it is 51 percent and the development budgets of some local communities have increased by up to 12 times. We have also seriously reinforced and improved the security and defense sector.

“Before I was elected president, Ukraine was 137th in the World Bank’s Doing Business rankings, today, we are 76th”

Are the strengthening of the security and defense sectors happening in collaboration with the U.S.?

Definitely. This is all in cooperation with the U.S. and NATO. When I was elected as president, it was prohibited for any American or NATO officer even to enter our Ministry of Defense. Today, we have the most effective level of cooperation, which can be demonstrated by the fact that Ukraine’s army is now officially among the 30 most efficient armies in the world and among the 10 most efficient armies in Europe. When I was elected we didn’t have an army at all. Can you imagine all these things happening during the last 3 years? And at least 50 percent of it has been during the last year. This is delivering big, concrete changes in the here and now. I won’t get too deep into every single reform, but each of them demanded a concentration of efforts from the government and parliament. Despite the fact that we have less than 1 year until the next presidential election, we are decisive enough to continue with the reforms. The Central Election Commission for the transparency of future elections, and many other sectoral reforms are in my agenda. But the main focus is on the improvement of the investment climate.

Last year Ukraine attracted $2.3 billion in foreign direct investment. What does that mean for the country and what is your outlook for the future?

We should look not only at the number, but at the quality of the investment. First, I will provide a few figures about the banking system, because this is another of our main achievements. When I was elected, 80 percent of the loans in the national bank system were non-performing loans (NPLs), and now we have an absolutely healthy banking system. We cleaned it up and now have full levels of trust and liability. Because this was so critical, much of the investment in Ukraine went to the banking sector in previous years.

Now, about 70 percent of investment goes into the real economy, and this is a very important trend that we expect to continue this year. I’m very optimistic because in 2014 and 2015, due to the Russian aggression and because Russia occupied much of the industrial potential of Ukraine (Donbass comprised almost 25 percent of industrial production), GDP fell by 10-15 percent. But today we have registered 9 consecutive quarters of economic growth, and we envision that GDP growth will be more than 3 percent this year. The first quarter gives us strong hopes, as it is at 3.1 percent. In this economic situation, we expect positive growth in investment. The privatization process will also bring in a huge investment boom because it offers unique opportunities – from infrastructure to the energy sector – which are simply impossible to find anywhere else in the world. 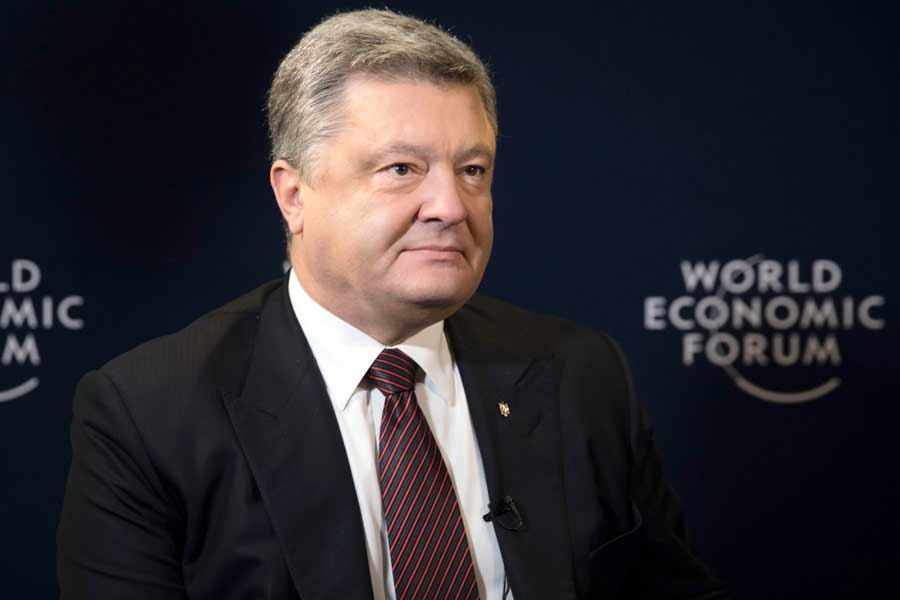 Photo: Office of the President

“American readers can understand how difficult health care reform is, but we presented it and implemented it in a very short period of time”

Since you were elected, Ukraine has entered into free trade agreements with the EU, Canada and negotiations with Turkey and Israel. How important are these agreements for Ukraine’s future in global trade?

I believe in removing barriers in international trade. Part of the reason is that this creates huge markets for all of our products. These agreements are powerful drivers for development in Ukrainian industry. Ukraine has important peculiarities, one of which is that we have the best soil in the world. We have a unique opportunity for food processing, for the FMCG sector, for the chemical industry, for the oil and gas industry and more.

What should foreign investors or visitors know about Ukraine?

First of all, Ukraine is safe, secure and reliable. No one should be afraid of the situation with Russia – we have an efficient sector for security and defense and have stopped Russia where it is. You can observe in all of the main cities that there is no feeling of being in a country at war. This is my main strategy. We have to protect the consumers of Ukraine from provoking a psychological crash due to the aggression.

We also need to communicate that our steps to improve the investment climate have created absolutely unique opportunities because of Ukraine’s economic competitiveness. We have taken steps to make investors completely comfortable in Ukraine, at the local and national level, as well as within legislation and our court system. With these reforms in place, along with new trade agreements, we have competitive advantages in many spheres, starting with energy and agriculture and finishing with the IT sector. Can you imagine that already, more than 3 percent of our GDP is generated by our IT specialists? This is a strategy for the future. Of course, we are not Silicon Valley, or at least I can say we aren’t Silicon Valley yet – but I’m very optimistic for the future.