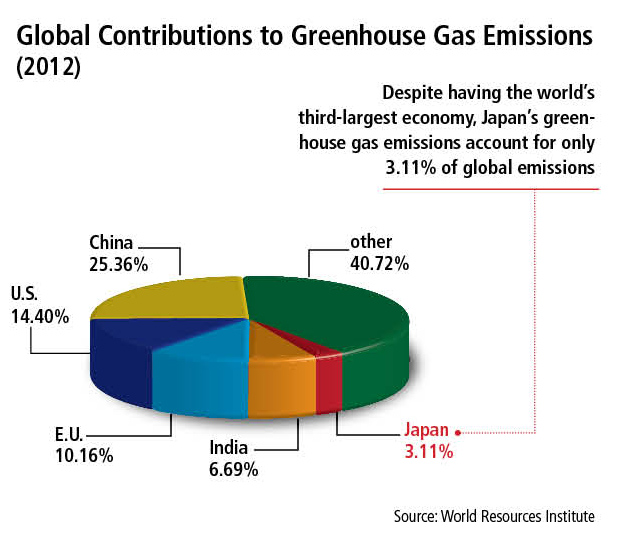 No suit? No tie? No problem! In Japan, between May and October every year, the government encourages people to roll up their sleeves, loosen their collars, and leave their ties at home as part of the “Cool Biz” initiative. Launched in 2005, the Cool Biz initiative aims to reduce energy consumption and CO2 emissions by getting people to rely less on air conditioning and instead come to work earlier, draw the blinds, and get creative in how they cope with the heat.

The program has prevented several million tons of emissions from being released into the air, and the government also enforces rigorous recycling guidelines. See graphic 1. Taking out the trash in Japan isn’t as simple as separating discarded food and items into garbage and recyclable piles. Green-mindedness is so embedded into Japanese culture that the government has issued guidelines for how to dispose of everything from lipstick to teakettles to clothing.

A guidebook on recycling home goods may seem like overkill, but it’s a big part of why Japan’s citizens lead the world in eco-friendly habits. Japan has improved energy efficiency by approximately 40% since the 1970s as a result of these and other policy changes and technological innovations. It’s clear that in Japan, climate action isn’t only about policy—it’s personal.

But Japan knows that one country alone cannot single-handedly take on climate change: There must be a global commitment. Japan’s leadership in the Kyoto Protocol, for example, embodies the type of global commitment necessary. Japan and the U.S. are leading the way in a forward-looking environmental partnership. This is illustrated in the April agreement between Prime Minister Abe and President Obama to work together to ensure global cooperation on climate change and to help developing countries implement environmentally sustainable plans of action.

Moreover, Japan and the U.S. are the top two contributors to the Global Climate Fund—for a combined 45% of the approximately $10 billion fund—which provides climate assistance funding to developing countries. The two nations are sending experts to developing countries to evaluate climate projects’ technological feasibility and to help them get underway. 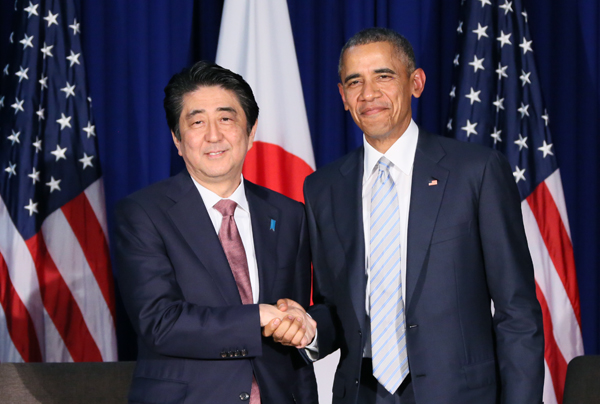 Japan by the Numbers

Private sector innovations from both countries have also contributed to addressing climate change by providing new technologies and services, from renewable power production to the hybrid fuel-efficient cars on streets around the world.

Nissan, Panasonic, Hitachi, and the other Japanese organizations
highlighted later in this report have developed green technologies with the potential to change the way people live their lives. Toyota, which has emphasized green development for more than 20 years, has set a goal of not only zero emissions, but also having a “net positive impact” on the environment by 2050.

As addressing climate change is increasingly urgent, citizens at all levels will need to take more action in their own lives. That’s why Japan keeps the heat on its workers during the summer by insisting they keep office temperatures at 82 degrees Fahrenheit (28 degrees Celsius) as part of the Cool Biz initiative and encourages other countries to adopt similar measures. So if you find yourself in Japan next summer and are surprised by how far its workers have taken informal dress, just remember that going casual means going green.

Casey Hynes is an independent journalist. She lived in Asia from 2010-2014, and contributed freelance features to a variety of leading media outlets including The Wall Street Journal, The Christian Science Monitor, South China Morning Post, and others during her time there. She holds a master's degree in journalism from Columbia University, and worked at Roll Call before moving overseas.