Meet the man bringing Japan to the world 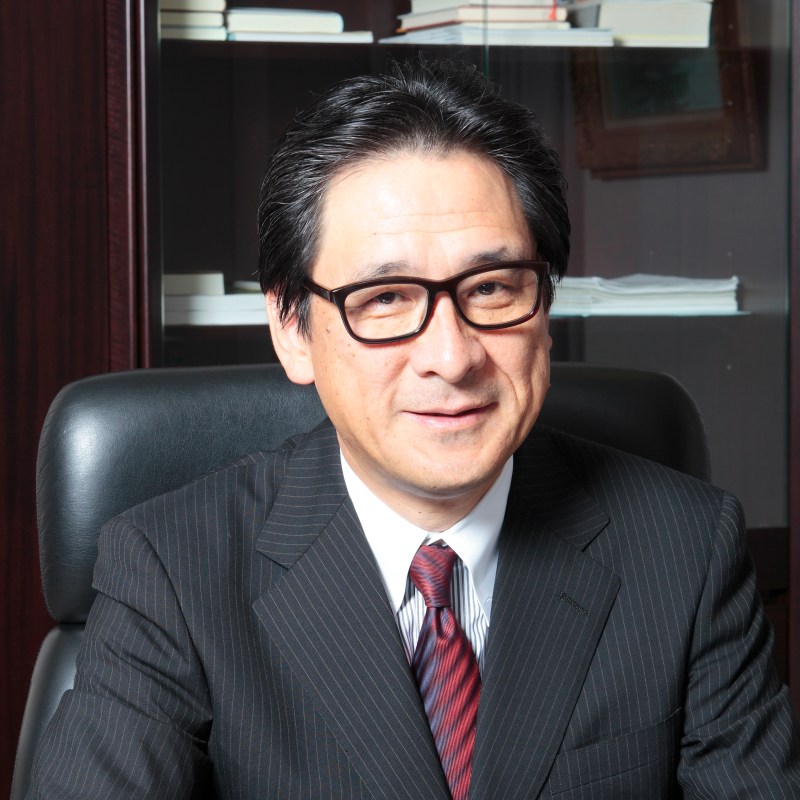 Hiroyuki Ishige is the Chairman and CEO of the Japan External Trade Organization (JETRO), a government-affiliated agency the works to boost trade and FDI. Here, he discusses investment opportunities, the Japanese brand, regional cooperation, and why the U.S. may want to consider rejoining the Trans-Pacific Partnership

JETRO is on the front line of Japan’s drive to become a bigger global player, working to promote mutual trade and investment with the rest of the world. The government-related organization works in three core areas: assisting foreign companies entering Japan and attracting FDI; supporting exports of Japanese agricultural, forestry, fishery and food products as well as supporting overseas expansion of small and midsized companies; and enhancing global economic partnership through policy studies and research.

In 2013, the government of Prime Minister Shinzo Abe announced its intention to double Japan’s inward FDI stock to ¥35 trillion ($314 billion) by 2020. How optimistic are you that Japan will meet that target?
The inward FDI stock as of the end of 2017 amounted to approximately 30 trillion yen (29.97 trillion yen based on the primary estimate). Although the target figure of achieving 35 trillion yen by 2020 was a considerably high bar to reach at the beginning, we believe that the government’s goal will be sufficiently achievable if recent increase continues.

Since the start of JETRO’s activities to increase FDI into Japan in 2003, we have supported almost 18,000 investment projects, including new and expansion investment, and led 1,800 cases to success. One trend that stands out recently is the momentum in the growth of tourism-related investment. The launch of foreign airlines particularly plays an active role in increasing foreign tourists to Japan. JETRO has assisted 10 overseas airline companies over the last few years in establishing business sites in Japan, such as Iberia Airlines of Spain, Juneyao Airlines and Spring Airlines of China, AirAsia X of Malaysia and Scoot of Singapore. Moreover, the increase in inbound tourists has also been boosting the export of Japanese products. JETRO has been focusing on this trend and has been proactively drawing e-commerce companies like JD.com from Asia in order for them to set up local procurement sites in Japan. As a government-affiliated organization tasked with the comprehensive promotion of trade and investment, we are also working to expand Japan’s exports through such activities.

Japan is already a highly developed market. In your opinion, where are the best opportunities and what advantages does Japan offer?
Japan is highly praised as a location for research and development from the perspective of technological capability and security of intellectual property. One of the reasons for this is that Japan is close to many fast-growing economies, such as China and ASEAN countries. For production of items such as cosmetics for women, foreign companies are finding a competitive advantage in producing their products in Japan, as it allows them to create a safe and reliable image to sell to their customers in Asia. The movement of foreign capital to take in Japan’s excellent technology and know-how has also been intensifying. Recently we can see foreign-affiliated companies setting up business sites in Japan in the fields of regenerative medicine and the Internet of Things (IoT).

“Although the target for FDI was a considerably high bar to reach at the beginning, we believe that the government’s goal will be sufficiently achievable if recent growth continues”

While Japan is becoming an aging society ahead of the rest of the world and has been referred to as a “developed country facing many serious challenges,” such challenges are motivating innovation. Indeed, some foreign companies are contributing to solving the issues of Japanese society by putting the technologies of the Fourth Industrial Revolution, such as IoT and AI, in use as countermeasures for the shortage of specialized physicians in the medical field and to improve productivity in the manufacturing field. I hope that foreign companies will take on the challenge of solving Japanese social issues with the power of innovation while taking advantage of the research and technology-development capabilities possessed by Japan.

In addition to that, the recent increase in inbound tourists, mainly from Asia, has created a large market. Various companies such as airlines, hotels and online travel agencies have been actively entering Japan in recent years. This trend will continue to bring about significant business opportunities for foreign companies.

In terms of both R&D and tourism, Japan can be considered a gateway into the region. Instead of focusing solely on the Japanese market, it is important to look at the overall growth in the region. When you consider issues such as intellectual property policies, I believe Japan has the advantage of offering a safe and reliable business environment. At the same time, I understand that the business environment needs improvement on a consistent basis in order to stay competitive.

What role do you see for Japan’s proposed $50 billion Indo-Pacific infrastructure investment fund, and how does this fit in with possible involvement in China’s One Belt, One Road Initiative?
I understand that the Free and Open Indo-Pacific Strategy by the administration is in progress, of which the key concept is to make the Indo-Pacific open based on the rule of law. Based on this principle, it is expected that the One Belt, One Road Initiative will also contribute to the peace and prosperity of the region and the world by fully incorporating common ideas of the international community, such as openness of infrastructure, transparency, economic efficiency and financial soundness. The important thing is to make sure that the governments of the countries receiving money for infrastructure, such as Sri Lanka with its massive port project, do not financially suffer due to these projects.

Japanese companies and institutions are looking at individual projects of the One Belt, One Road Initiative to consider possible participation and cooperation opportunities. In this light, regarding business cooperation between China and Japan in third countries, it is also important to bolster free and open, win-win relationships based on rules. 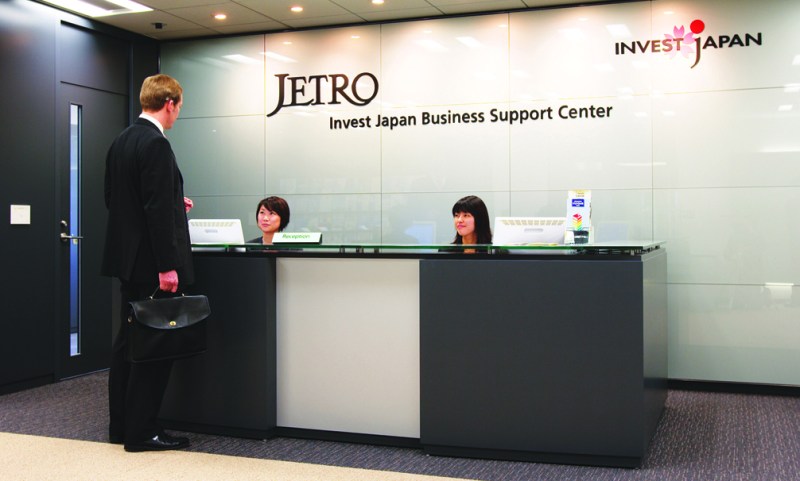 One of JETRO’s business support centers for investors. Photo: JETRO

What is JETRO’s role in supporting Japanese exports and building the Japanese brand overseas?
JETRO has a long history of promoting exports of manufactured products, and I believe that Japan has managed to achieve a strong brand image in this area. Currently, one of our prioritized fields is agricultural, forestry, fishery products and food export. We have 47 offices nationwide in Japan, and I have asked the head of each branch to put forward a local product that has potential for export. This means that each branch manager has to be in touch with local producers or agricultural processers, and this process of reaching out to locals helps to change the mindset and attitude towards the challenging task of promoting exports in new fields. Now that the rules for TPP have been set, we have greater access to international markets, but there is no point if local producers are not geared up to take advantage of them.

In line with this, with the aim of branding Japanese agricultural, forestry and fishery products and processed food, JFOODO, a new organization tasked with implementing promotional activities toward overseas consumers under an “All-Japan” initiative, was launched last year within JETRO. JFOODO has selected several key items, such as rice flour, green tea, alcoholic beverages (Japanese sake, Japanese wine, craft beer, etc.), wagyu beef and fishery products. We hope to create a stronger platform for overseas B-to-C promotions and branding projects that stimulate international demand. Japanese cuisine is increasingly becoming popular globally, and so we believe there is great potential in this.

What is it that holds Japanese companies back from going global?
The language barrier is still an issue for many Japanese companies, and breaking that barrier is crucial to be truly globally successful. I believe that whether the companies can change depends on whether the top leaders of companies realize the necessity to change and decide to implement practical and effective changes to become global. If we take companies in Germany or France, say 40 years ago, I reckon most employees would only have spoken their mother tongue, with English spoken only in the international department. However, with the progress of regional integration, English has become the business language across Europe. I believe the same pattern is happening in ASEAN countries now. Improvement of English courses in educational institutions will stimulate change, but companies must also be proactive in this area. Language will become even more important for companies exporting services than products, as it is impossible to offer services without a common language. From the perspective of business necessity, the Japanese people will overcome the language barrier by mastering English. Full-fledged efforts in this process are starting.“Breaking the language barrier is crucial for Japanese companies to be truly globally successful”

Japan suffers from an image problem of being a difficult and bureaucratic market to enter. What services and support do you provide to international investors considering moving into Japan?
I believe that is an old mindset, and the investment environment in Japan is steadily improving. JETRO offers comprehensive services from the provision of information on investment, free temporary office space for overseas companies to start operation in Japan and free consultation services by experts, to follow-up after the establishment of a business site. Furthermore, with the launch of the “Personal Adviser System for Foreign Companies” last year, we are providing close support assigning staff members to about 1,000 foreign companies in order to listen to their needs. We hear the requests regarding regulations and administrative procedures from the companies and deliver their requests to the government to improve the business environment.

Currently, one of the most serious management issues for foreign companies active in Japan is “difficulty in securing human resources.” Statistics show that approximately two-thirds of the foreign exchange students studying in Japan want to stay on in Japan and work after graduating, but less than half manage to stay with a job. Thus, JETRO has been committed to easing such issues by holding events where foreign-affiliated companies and foreign students can meet. As I mentioned earlier, SMEs in Japan who want to expand their business overseas are also lacking global human resources, so we believe there are possibilities for exchange students to work and play an active part in such companies as well.

In one sentence, why is Japan the country to invest in?
Japan can provide a profitable, safe and reliable business environment for foreign companies seeking to expand their business not only in Japan but also in the surrounding regional markets.