Japan’s regulatory agency for medical products, Pharmaceutical and Medical Devices Agency (PMDA), is pioneering a method of scientific decision-making that takes into account ethical judgements about people and society to ensure that safe and life-saving medical products can reach the market quickly. This objective approach to evaluating pharmaceuticals and medical devices, explains Dr. Tatsuya Kondo, PMDA’s chief executive, has had significant benefits in Japan and can serve as useful both in other fields and outside of Japan to improve regulatory decisions about healthcare globally.

Japan’s Pharmaceuticals and Medical Devices Agency (PMDA) was established on April 1, 2004 to secure the quality, efficacy and safety of pharmaceuticals, medical devices, and regenerative medical products. It is an independent administrative agency founded on three core operations known as the “PMDA Safety Triangle,” which, although unique to Japan, is known by regulators around the world. The safety triangle consists of: reviewing operations to evaluate new medical product safety and efficacy, safety operations to monitor and mitigate product risks, and relief operations for sufferers of adverse health effects of authorized drug products.

While maintaining a strong grounding in the principles of regulatory science, PMDA carries out its day-to-day operations in a way that ensures people will be able to benefit quickly from innovative products including pharmaceuticals, medical devices and regenerative medical products. 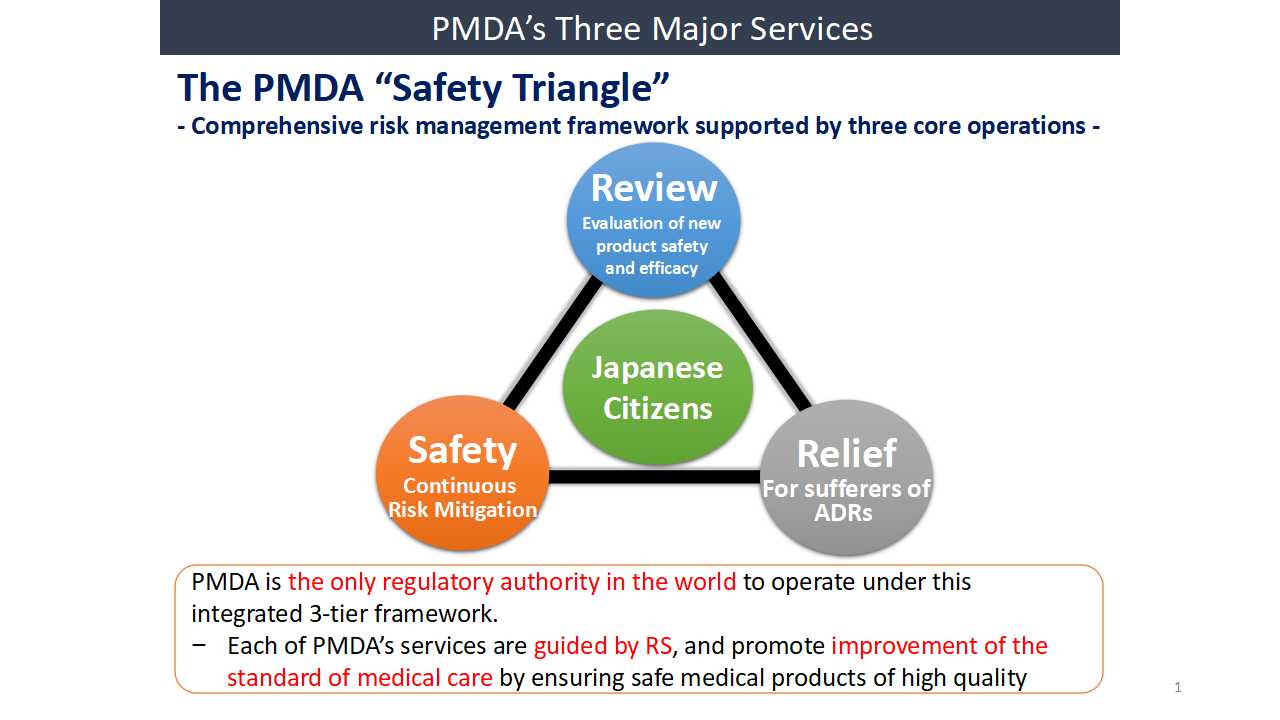 What is regulatory science?

The concept of regulatory science (RS) was proposed in 1987 by Dr. Mitsuru Uchiyama. According to Dr. Uchiyama, RS can be described as “the science of precise prediction, evaluation, and judgment based on scientific evidence in order to adapt the achievements of science and technology to social and human needs in the most optimal way.” 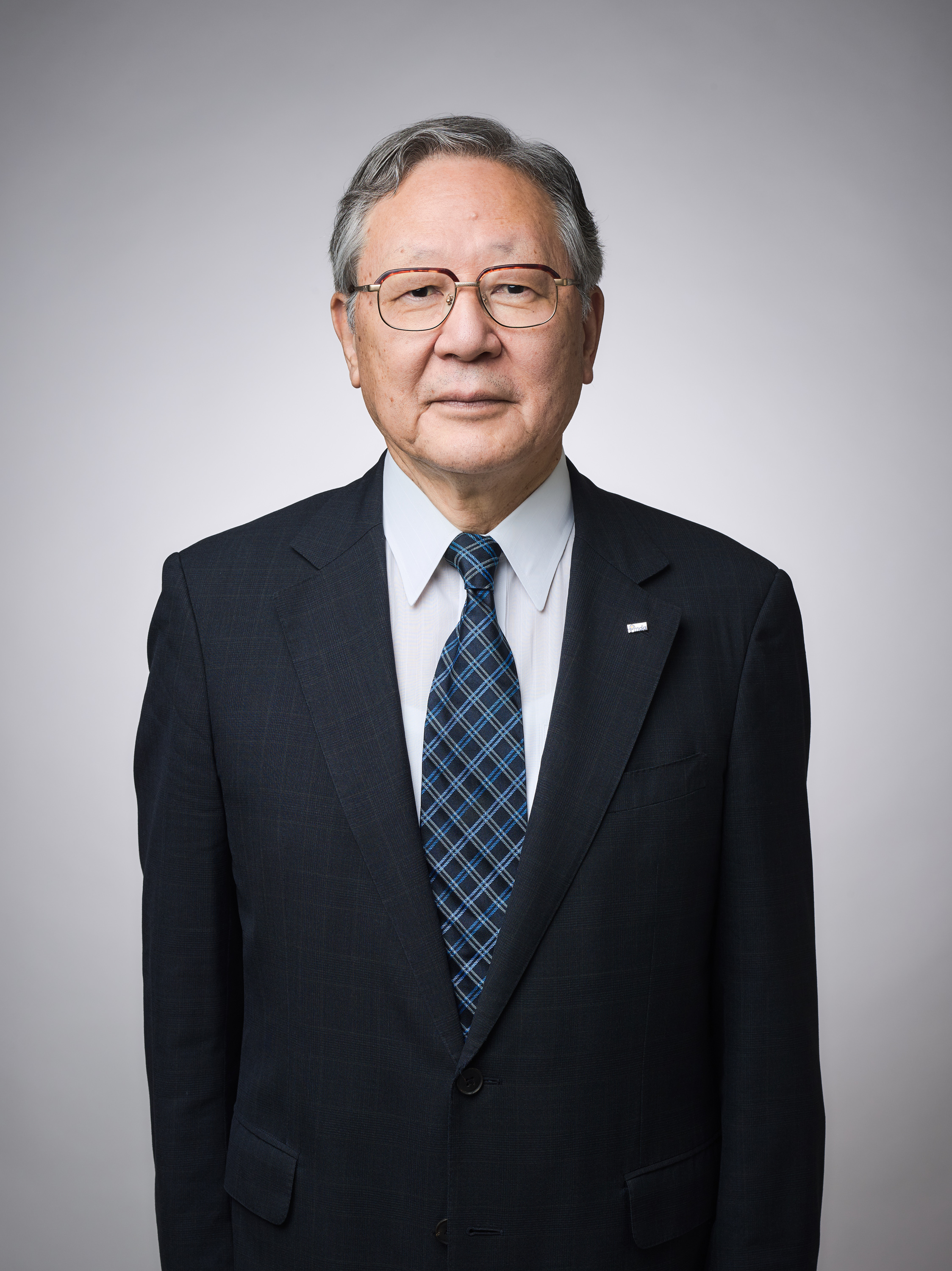 More specifically, RS has been characterized as having two components. The first is evaluation science, which accurately predicts both favorable and unfavorable results of scientific and technological developments. The second is the science of optimal regulation, which addresses the needs of people and society as a whole.

Dr. Uchiyama contributed to raising awareness of these concepts not only within Japan, but also in other countries.

With this background, I believe that the RS we are considering is a multidimensional science. It incorporates ethical judgments that take into account impacts on people and society in order to apply knowledge gained from academic science to society and humanity.

Decisions and policies pertaining to medical products such as pharmaceuticals, medical devices, and regenerative medical products in regulatory affairs require the application of such a multidimensional scientific approach based on RS principles.

As a specific methodology, we first perform mapping of elements for seed-stage technologies then evaluate these elements in a multilateral and multidimensional manner; in other words, a microscopic evaluation. Next, these microscopic factors are comprehensively evaluated. In doing so, risk-benefit assessment can be completed in a scientific manner without oversight, allowing for the effective evaluation of seed-stage technologies.

This methodology gives rise to a science that can drive the development of regulations that are optimal for seed-stage products that benefit people and society – RS engineering. 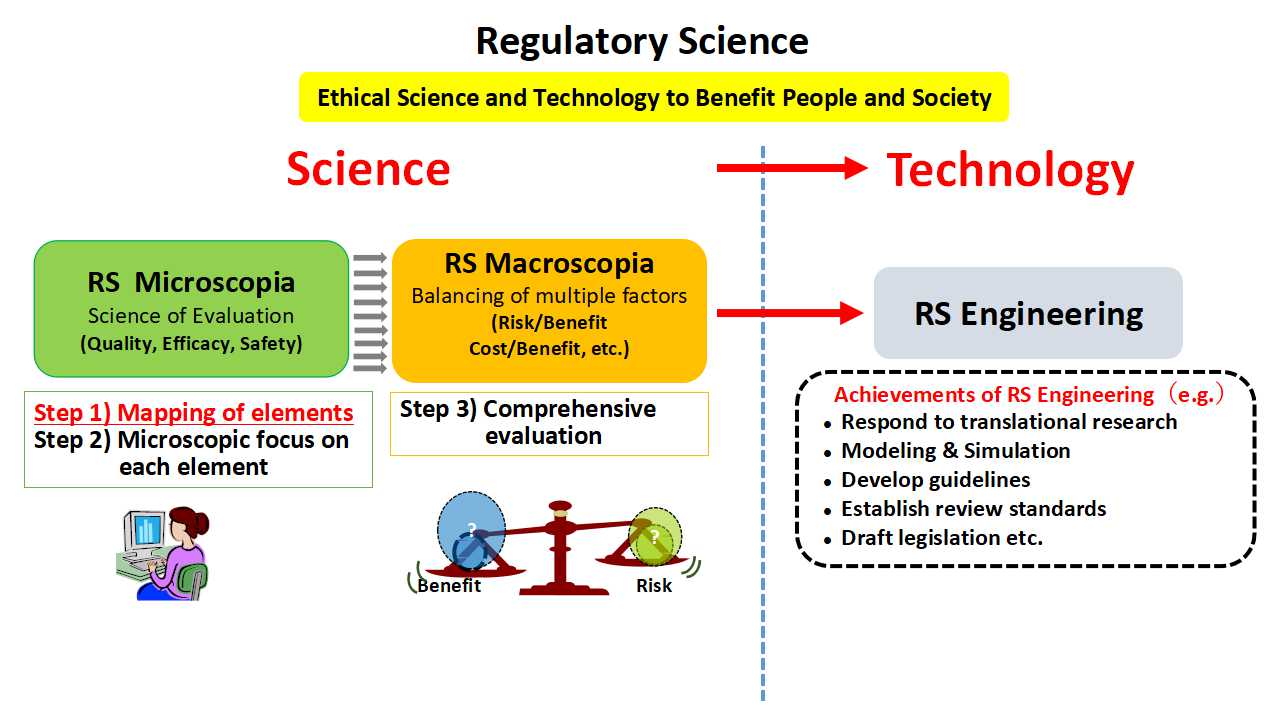 I was appointed as PMDA’s chief executive in 2008. During the early years of its existence, PMDA was met with harsh criticism by the public, citing deficiencies such as delays in the review process for marketing authorization for drug and medical device products, issues respectively referred to as “drug lag” and “device lag,” as well as inadequate safety measures triggered by the problem of drug-induced hepatitis. Despite its status as a public institution with a critical mission, the level of trust in Japanese citizens and the international community was never high.

In this context, I developed PMDA’s flagship mission statement, and made the concept of RS the basis for all of PMDA’s decisions. The mission statement clearly states PMDA’s ultimate goal of protecting the health and wellbeing of the population. Although already given for regulators and healthcare workers, I believed that by stating this mindset, the overarching direction of the entire organization becomes clear, allowing for consistent and unwavering actions.

I believe that an RS approach should be applied not only in the regulation of medical products, but also in general healthcare matters and other fields.

With this change in place and in its new product review operations, PMDA has enhanced its capacity to recognize and understand obstacles appearing in product development before approval applications are submitted by enhancing its pre-application consultation offerings, which were underemphasized in the past. This new focus on mitigating obstacles to successful development prior to application submission frequently allows for virtually all issues to be resolved by the time of actual submission. As a result, review processes progress more smoothly and efficiently, substantially reducing the time required for reviews. In 2011, we succeeded for the first time in reducing drug/device lag almost to zero.

Later, in 2011, PMDA began offering what is known today as RS General Consultations and RS Strategy Consultations, designed to connect promising seed-stage research or technologies to the next stages of product development. Moreover, in 2012, PMDA established the PMDA Science Board to strengthen cooperation with leaders in the Japanese academic community and to consider optimal regulatory responses to state-of-the-art technologies.

Further, through collaboration with Japan’s Ministry of Health, Labor and Welfare (MHLW), PMDA has:

We will continue to strive for further improvement and advancement. One notable achievement is PMDA’s growth into a regulatory organization that has achieved the world’s fastest new drug review periods for the third consecutive year since 2014.

Additionally, with regard to safety measures, we were able to further develop our staff and capacity to promptly implement suitable safety measures, applying lessons learned while tackling the issue of drug-related hepatitis. PMDA is also focusing efforts on the dissemination of product safety information through activities to ensure that medical professionals have rapid access to critical updates and alerts, such as the PMDA Medi-navi electronic mailing list service and enhancements to content and functionality on the PMDA website.

To further increase the sophistication of safety measures, PMDA developed the medical information database network (MID-NET®) in accordance with the final recommendation by a committee formed to determine the optimal policy framework for verifying the cases of drug-induced hepatitis arising in 2010 and preventing future occurrences. The full-scale launch of MID-NET® operations occurred in April 2018.

From this year onward, PMDA is working to promote the utilization of real-world data through resources such as MID-NET® and the Japanese National Database of Health Insurance Claims and Specific Health Checkups (NDB), as well as actively collecting and analyzing information detailing the safety and efficacy of medical products in actual use.

The time has come for Japan too to be able to benefit from innovative medicines at the same time as the rest of the world. As such, I believe that the increasing number of cases where the risks not understood during the development stage will become clear in Japan for the first time. I also believe that the system for early approval of drugs indicated for diseases with serious symptoms and/or a lack of effective treatments, on the condition that such products will undergo efficacy reevaluation and post-marketing safety assessment, will be used more effectively in the future.

In order to prevent reoccurrences of drug-related crises, PMDA will promptly utilize real-world data and implement rapid countermeasures based on the concept of RS and based on product Risk Management Plans (RMP), which serve to summarize the details of the risk management measures for a product from the development stage to the post-marketing stage.

In the unlikely event of such drug-related harm despite the proper use of medicines, PMDA will take measures to provide support to patients affected by severe side-effects under Japan’s unique Relief System for Sufferers of Adverse Drug Reactions.

PMDA has established new avenues for the further advancement of RS principles, namely the use of electronic data in product marketing authorization applications (electronic clinical trial data) and the launch of MID-NET®. In light of these developments, PMDA established its Regulatory Science Center (“RS Center”) in April 2018, with the aim of organically coordinating its activities related to RS for the purpose of further improving the quality of its product review and safety-related operations.
The RS Center’s primary tasks are: 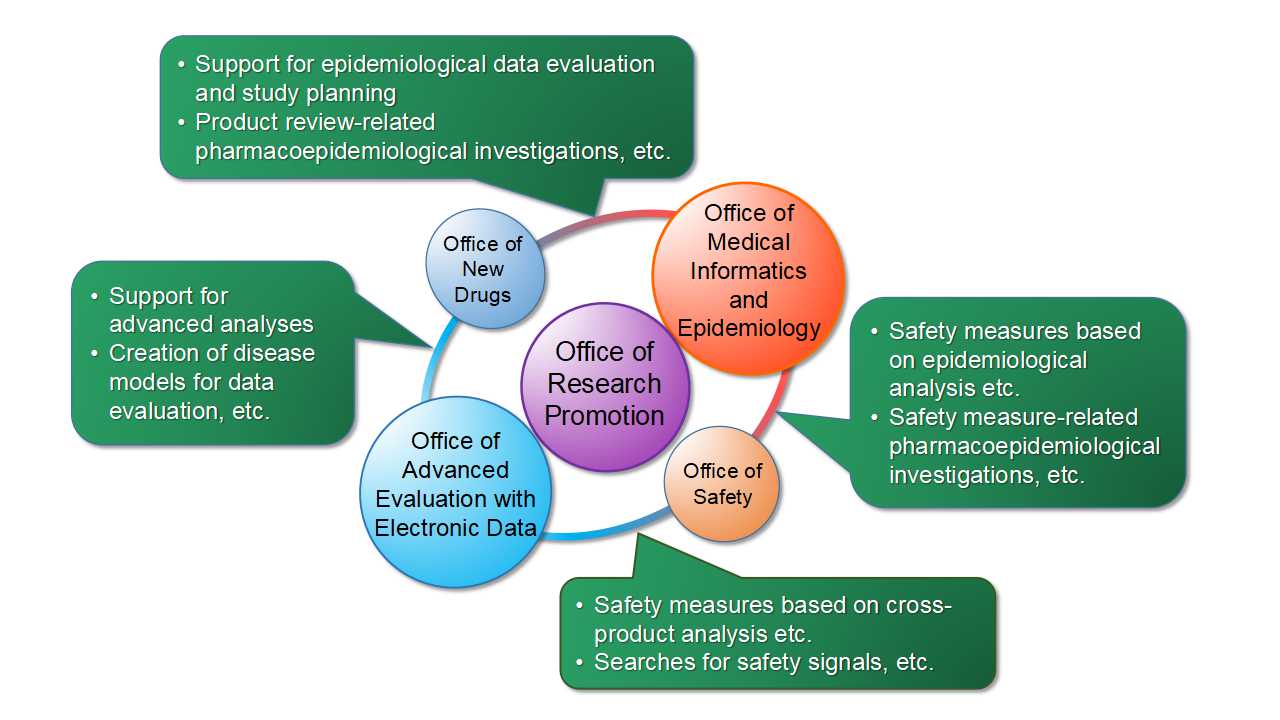 Through the efforts of the RS Center, PMDA is promoting the further advancement of product development and post-marketing safety measures and is maintaining active involvement in global regulatory affairs through the activities of the PMDA Asia Training Center for Pharmaceuticals and Medical Devices Regulatory Affairs. In this way, PMDA will continue to foster progress towards the realization of rational medicine in the future.

Under an RS-based approach, the potential of new inventions and the value of discoveries are judged not based on the subjective preferences of reviewers, but rather by comprehensively evaluating and deciding how to map the positive and negative aspects of a candidate product, and considering holistically how it should be utilized. Therefore, I believe that such an approach should be applied not only in the regulation of medical products, but also in general healthcare matters and other fields.

As new and innovative medical products continue to appear in the future, the importance of the application of RS principles in regulatory activities will also continue to increase as regulators strive to determine and promote the most beneficial uses of these products.

I also believe that the concept of regulatory science proposed by Dr. Uchiyama will continue to spread internationally and lead to greater benefits to patients around the world, and I look forward to PMDA’s continued work to actively promote and advance regulatory science.